In the last of his weekly race reports, Ryan McElligott watches as Paul Nolan's talented five-year-old romps home and interventions were required at Punchestown 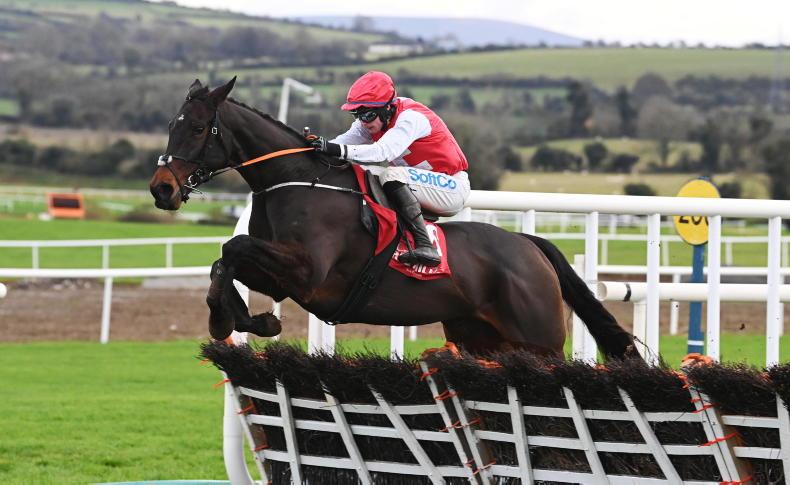 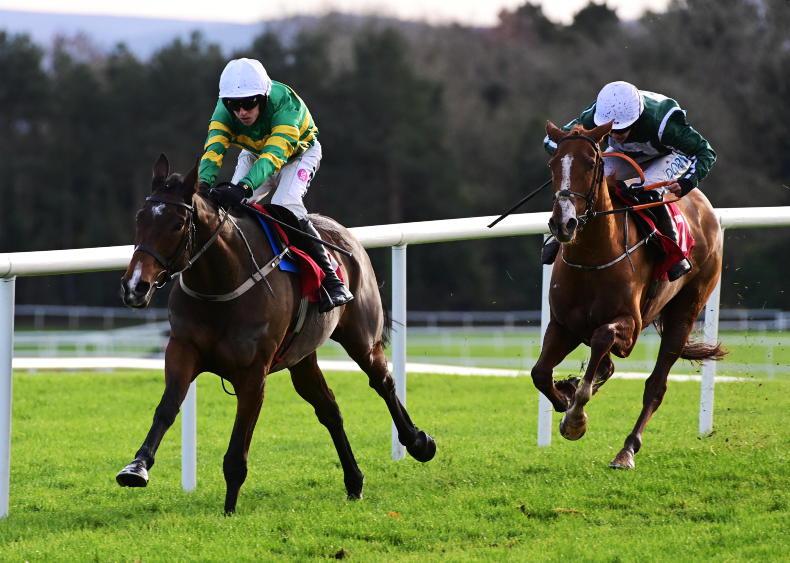 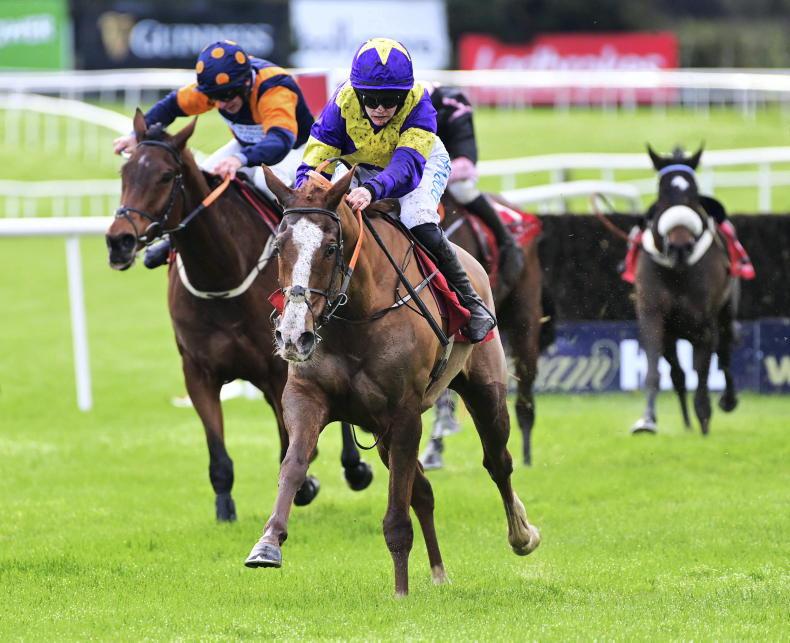 SANDOR Clegane provided Paul Nolan with a welcome change of luck as he cruised to victory in the Connolly’s Red Mills Irish EBF Auction Maiden Hurdle which served notice that he will be ready to tackle much better company in the coming weeks.

The talented five-year-old, who chased home Facile Vega at the Dublin Racing Festival in February, was all the better for his debut second over hurdles at Galway and seemed to revel in the step up to just short of two and three quarter miles. Through the race Sean O’Keeffe’s mount did everything right and from before two out the 15/8 chance looked to have the favourite Demandrivingdouvan covered. Indeed, Sandor Clegane powered away on the bridle from the turn-in to eventually reach the line a dozen lengths clear of Bleu D’enfer.

“Sean said he felt like a proper horse. He said he came alive three out and quickened well. That’s what he’s able to do at this trip,” said Nolan. “I think he’ll be just as effective on slower ground too and the aim is the Albert Bartlett. We’ll work back from there.

“We had very little during the summer and then a few little things went wrong. Hopefully we have a few nice ones to come and he’s one of them. If he had got beat it was going to be a long struggle.”

The afternoon concluded with a third straight success for the progressive Pat Downey inmate Penny Jar in the William Hill-sponsored 80-102 rated handicap hurdle over just short of two and three-quarter miles.

The 15/2 shot had to deal with a stone rise in the ratings for wins at Bellewstown and Listowel and he did so in gritty fashion under Conor McNamara. From before the last he did battle with Clear The Clouds and he fought on tenaciously to score by three-parts of a length.

“He’s run three times this year and won all three and I’d say he’s entitled to a break now as he doesn’t want the ground too soft. He’s not a big horse and he won’t jump a fence but he loves a fight and keeps at it very well,” declared Pat Downey whose charge is owned by Kevin Heaney.

THE first of the day’s maiden hurdles required the intervention of the stewards as The Big Doyen (11/5), who passed the post in front, was demoted in favour of Nucky Johnson (6/1). The leading pair flashed across the line in unison but The Big Doyen made contact with the second on the run-in. With the verdict only a short head, it was possible that a change would be made in the ensuing stewards’ enquiry.

Noel Meade trains Nucky Johnson for the Missed Flight Syndicate while Bryan Cooper was on board the four-year-old who was building on a third to Three Card Brag at Galway in late October. Back in third was the triple bumper winner Hunters Yarn who was returned the 4/6 favourite.

The second division of that William Hill-sponsored two-mile maiden hurdle went to a nice type in the Willie Mullins-trained and J.P. McManus-owned Intranet (11/8). Intranet was making his Irish debut having won his sole outing in an AQPS race in France 13 months ago.

His task was eased when chief rival Timmy Tuesday ran off the track after three flights. The winner showed a lovely attitude for Mark Walsh in the straight. Belle The Lioness laid down a strong challenge from the turn-in and was in front at the last, but Intranet rallied splendidly to get on top on the run-in and prevailed by two and a quarter lengths.

“He’s a nice horse and it was a good performance as he hadn’t run in a good while. We’ll see what Willie wants to do, but you’d be very happy with that and he’ll learn plenty from here,” stated the owner’s racing manager Frank Berry.

Willie Mullins promptly followed up with the talented Tax For Max in the William Hill Epic Value Hurdle over two miles. The 132-rated 5/4 favourite enjoyed a straight forward time of things from the front under Paul Townend. The Simon Munir and Isaac Souede-owned gelding eased away from his toiling rivals from the second last for a very easy seven-and-a-half lengths victory over Falcon Eight.

“That race was a good find and his best form is actually around here and the tongue-tie (first time) probably helped him. He deserved that because he runs well and he’s relaxed a lot compared to what he was like. I remember the first day I rode him in Fairyhouse it was an experience for both of us,” commented Townend.

Cerisy a Marvel on his return after Wexford fall

MARVEL De Cerisy (4/1) bounced back from a fall on his chasing debut at Wexford in late October to run out a smooth winner of the William Hill Ireland Rated Novice Chase over just short of two and a half miles.

The Caolan Woods-owned five-year-old showed no ill effects from his fall last time as he turned in a decent round of jumping under Rachael Blackmore. When Gracchus De Balme and Grandero Bello exited five out Marvel De Cerisy’s task was eased somewhat and he readily took charge of this race from the turn-in to defeat Aarons Day by six and a half lengths.

“The step up to this trip suited and he was good. I know the race fell apart a bit but it was nice to see him do that and he jumped well,” stated Henry de Bromhead.

The day’s other chase saw the 22-race maiden Highstreetfashion get off the mark in the William Hill-sponsored 0-102 rated handicap over three and a quarter miles. The well-supported 9/1 shot was giving jockey Paddy O’Brien his second winner and he produced a likeable effort from the front. Highstreetfashion asserted in good style in the straight to defeat Spancil Hill by six and a half lengths.

“He’s a big horse and has taken a while to come to himsel. He’s a half-brother to Witness Of Fashion who won six for us but didn’t win until he was seven,” reported owner-trainer Pat Rooney. “Paddy gave him a lovely ride and hopefully he’s a horse who might go on to win another couple for us. We had his back looked at a few weeks ago and that’s helped him too.”

J.P. McManus enjoyed another success as the Sneezy Foster-trained Pike County (14/1) pulled off an improbable success in the two-mile handicap hurdle. Charlie O’Dwyer’s mount had it all to do turning for home but started to stay on and recovered from a less than fluent leap at the last to run down Halsafari. “He has always shown us a bit. He’s won on the flat and over hurdles this year and at the age of nine he’s probably growing up a bit,” said the trainer.