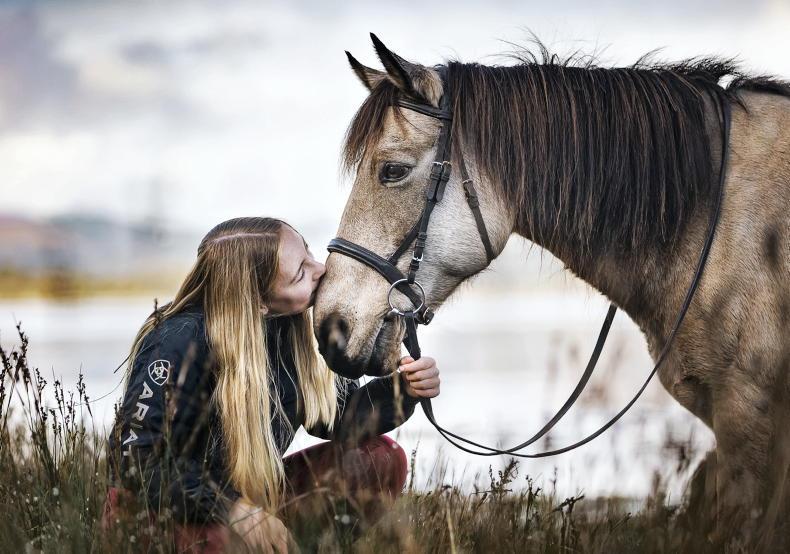 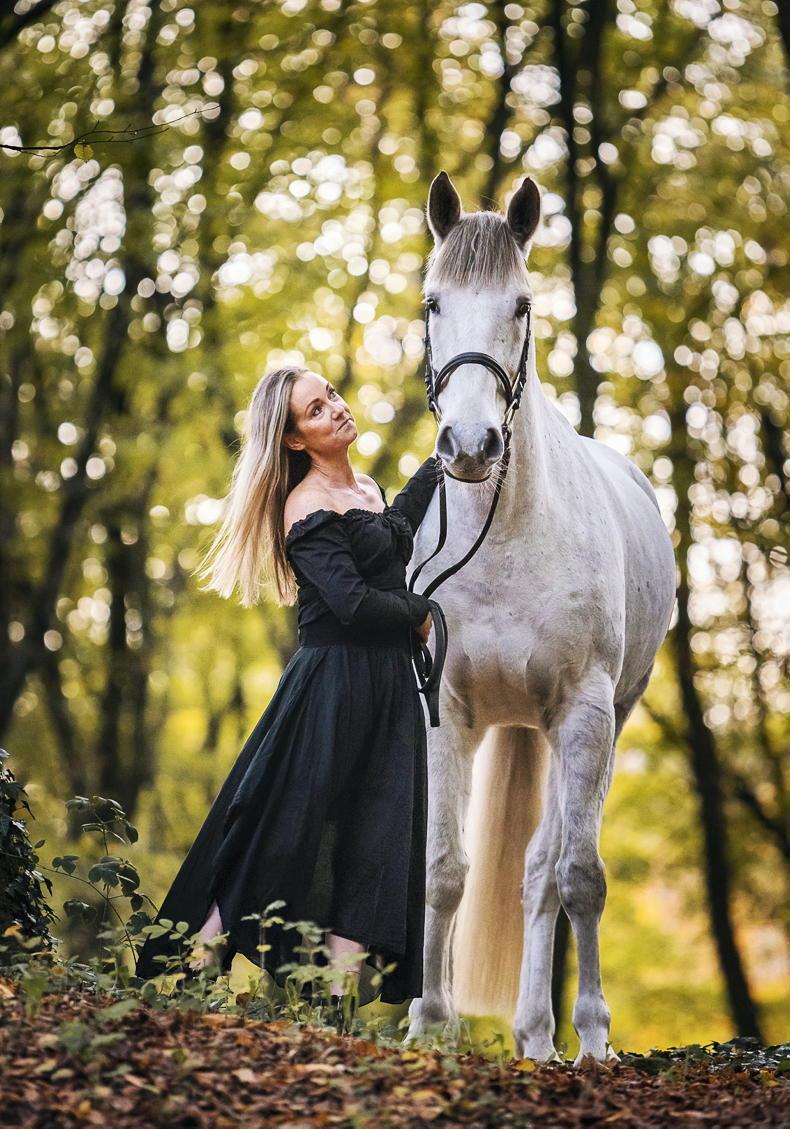 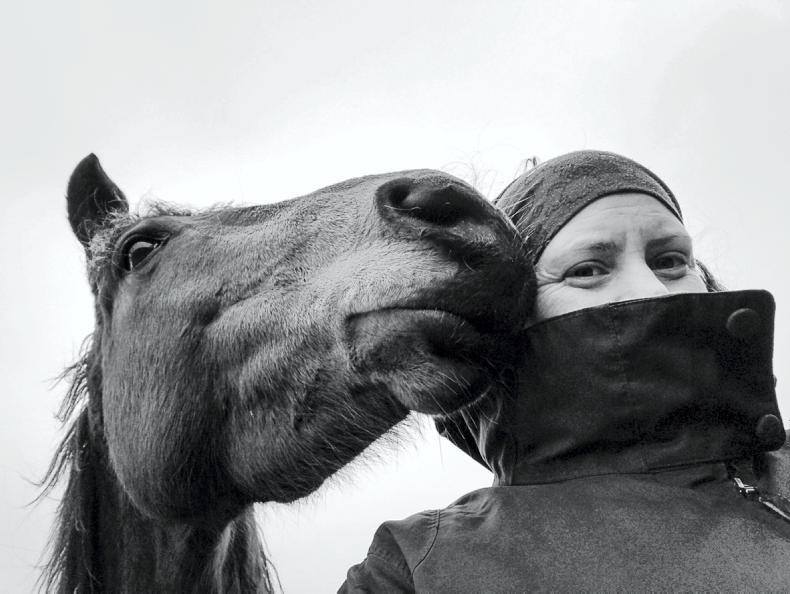 GROWING up on a stud farm in the midlands, it came as no surprise that horses would feature in some form in photographer Melanie Downes’s life. Thanks to her parents, she and her brothers grew up immersed in the equine world, learning to ride with generously loaned ponies carefully educating them in the early days.

“We were lucky to have the influence and knowledge of both parents coming from professional thoroughbred breeding backgrounds. We spent many joy-filled hours on horseback which wouldn’t have happened without that family support and commitment. Our Mum took on the task of carting us around to pony club training and events and after we had finished, she returned to serve as D.C. in Westmeath Pony Club. Thanks to her, I distinctly remember the feeling of luxury as a child to have a photo of yourself and your trusty pony mid-flight over some cross country fence. This one large framed photo was treasured like gold.”

There are many people and ponies that played an important role in Melanie’s early riding days. “I am also forever indebted to our local veterinary surgeon at the time, Dr Dermot McIlveen, who always patiently entertained my constant curiosity about his work. This same kind soul also gifted me my first very own (ancient!) pony called Cliff, whom I shared many adventures with.

“Over the years there were other ponies who played important roles; ‘Duchess’ fine-tuned my stickability cross-country and ‘Caime’ a very much appreciated schoolmaster loan, helped me develop an appreciation for the value of flatwork.”

As Melanie began to explore career options, she followed a long-standing interest in the visual art world and applied to study at the National College of Art and Design in Dublin where she graduated with a degree in Craft Design and later went on to study Photojournalism through the NTCJ in Britain. Keen to maintain her equine connections during her college years, she worked in small dressage and eventing yards in Austria and Germany during the summer months.

Art college training led to creative work in the visual storytelling world of film and television fulfilling roles as as Art Director and Graphic Designer. “I have been lucky to collaborate with many talented creatives on productions such as Normal People, Modern Love, Sing Street, Brooklyn, Calvary, The Tudors to name just a few.

“I’ve also worked as a Press Photographer in the UK, and as a Stills Photographer for a number of small film productions. The draw to horses always remained and a recent return to photography, getting Picturecatcher Photography off the ground, has allowed me to combine the creative work with the horse world.

“When I was growing up, the opportunity to have a portrait taken with your pony seemed rare. Many things have changed since and I feel there are others, like me, who would have loved to have had even just one professional shoot documenting the life they share with their horse, pony or puppy. In these past couple of crazy years, I think many people with animals have a renewed appreciation for the relationship they have with them, seeing this time spent in the yard as a grounding constant in an ever changing world.

“My work is about giving dedicated horse and pony horse owners of all ages the opportunity to document these relationships and create images to be treasured and tell their story for generations to come.”

Melanie’s experience of being around horses and her eye for detail, along with her training, means the perfect picture is never too hard to get. No day or subject is the same and she is first to admit that she really enjoys collaborating with interesting like-minded people to capture their creative vision.

“I am lucky thanks to years of experience working with visual storytelling on film sets, that I come equipped with an ‘eye’ for finding the most suitable portrait spots in any location. Clients’ concerns about whether their horse will behave, if the yard is ‘good enough’ for shooting portraits or about the dreaded ‘what to wear’ question are all factored in.

“What people often don’t realise, until we start to get into it, is that this brainstorming of possible options and idea gathering can be a really fun, creative part. It’s all part of the preparation. Just like heading off to compete somewhere, the better prepared we are the more we can get out of the photoshoot. Portrait sessions are as flexible and relaxed as possible so that we can work with the horses exactly how they are on the day. Some days also bring requests to include the family hound which, as you can imagine, usually adds to the fun!

“There are many great aspects to my job. Scouting for and working in diverse locations provides constant inspiration. Some people prefer to shoot in and around their home yard while others choose to make use of our stunning Irish landscapes, from ancient woodlands to wild coastal beaches. Last year we had some great photoshoots by the sea, and this year I’m looking forward to expanding the team to do some styled shoots in a few special locations.”

Being part of a story by recording a long standing partnership is one of the unexpected honours for Melanie.

“The honour of being asked to document the last days of a very special and much loved elderly pony or horse, creating memories with these treasured ones that have been an integral part of our lives sometimes for over two decades, is hard to describe. Not something you might initially consider when you think of the work of an equine photographer. It is rewarding to be able to use your work to help preserve the memories of these great animals for their owners while also creating the possibility for them to be shared with future generations.”

In addition to her work, Melanie also really enjoys creating documentary style work, a nod to her photojournalism days. This can include covering all aspects of a specific event or, working with professionals to document their work visually in a body of work which can be used to support the marketing of their equine related business.