Title: PROFILE - Liam McAlinden: End of an era as huntsman bows out 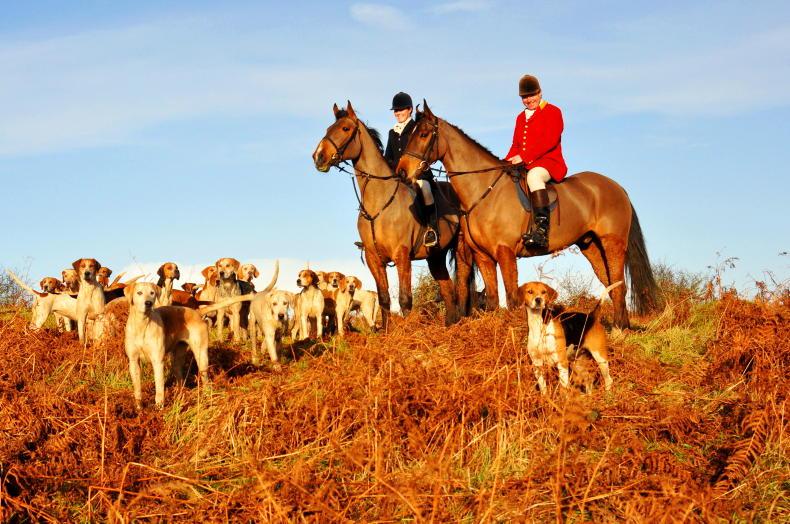 East Galway Foxhounds huntsman, Liam McAlinden, who retired this season, pictured with his wife Dorothy and hounds at Taughmacconnell. Meath's Eoghan McCabe has taken over as huntsman of the pack / Noel Mullins

IT is the end of an era for the East Galway Foxhounds as their huntsman Liam McAlinden has retired from hunting hounds. In the last 18 seasons, he has provided exceptional sport for the followers.

Liam has always been an extremely popular man, kind and sensitive to people’s feelings, with a great way with followers, especially children, who he continuously encouraged which made such a difference in enjoying their sport. Many of them honed their riding skills in the hunting field and went on to claim national and international honours in both showjumping and eventing.

He is also a perfectionist which means he was his own worst critic, often when it was not warranted. He analysed each hunting day to see what could be improved, which hounds were most effective and spent a lot of time trying to continuously improve his hound breeding policy so that he had the most suitable type of hound for the East Galway country.

Hunting and hound breeding has always been Liam’s passion from his early days when walking out the Galway Blazers hounds with Tom and Michael Dempsey, and helping in the kennels which provided a welcome break from the family business in Galway. He also benefited from hunting with Lady Anne Hemphill when she was field-master of the Blazers. He then went on and hunted the County Sligo Harriers, with his wife Dorothy whipping-in to him and helping with the horses and the kennels.

The call from the East Galways

In 2006 Liam answered the call from East Galway Foxhounds to hunt hounds, and it reflects well on the exceptional stability of the East Galway Hunt as, between Liam and his predecessor Michael Dempsey Jnr, they are the only huntsmen to have hunted the pack over the last 40 seasons.

The job also gave Liam and Dorothy, a daughter of the late field-master of the Galway Blazers Willie Leahy, the opportunity to combine hunting with farming a few miles away in Aille Cross where they produce cattle, sheep and horses. Whipping-in to Liam in his first season were Miley Cash and Jimmy Colohan, and later Alan Briscoe and Neville Horsman.

Masters at the time were Chantal Deon, Vincent Shields, Brian Siggins and Michael Brassil with Cyril Larkin as field-master. Liam had always great support from the hunt committee but his hunting mentor was the late Tom Fahy, an extensive farmer in the area, who was chairman for nearly 40 seasons. There was no better team to represent the East Galways in organising hunt country than in Liam and Tom. They were welcome in farmers’ houses, and shared many a pot of tea in their travels where they were equally adept at talking about farming as hunting.

Tom and his family were also known for their community work, and travelled with the Clonfert Dioceses group to Lourdes each year to assist the patients from all over the parish.

It could be said that the East Galways got four for the price of one, as Liam had no end of support from his wife Dorothy and their children Daniel and Rachel. They were always there to help with autumn hunting, in the kennels, to bring horses on, and turn hounds to him on a hunting day.

I remember a meet near Portumna when Dorothy was still out in the dark with Liam picking up a couple of young hounds that had become detached from the main pack during the day, when the followers and indeed some hunt staff were either back in the pub or gone home. Crucial to Liam’s success over the years was the support he got from the ground crew of Johnny, Shane, Colm and Paddy O’Donnell.

Liam would beam from ear to ear when hounds had a good day, and he was part of a small group of huntsmen that contacted each other after a meet to see how they fared on the day. I had the pleasure of hunting with him in both Sligo and East Galway, and autumn hunting on foot in the bogs and woods around Laurencetown and Eyrecourt with breakfast usually in The Bird of Paradise Cafe afterwards! But one of my best memories was from MacDonagh’s pub when hounds produced a succession of runs from morning right into evening darkness.

Liam took over the original kennels in Red Mount Hill and produced a wonderful pack of mainly Old English hounds with many of the foundation hounds sourced not alone in Ireland but also in the UK.

It was a landmark moment when the pack was moved to a green field site in 2014 where joint-master Joe Cavanagh built a new state of the art kennels with many new modern facilities. It is one of the most impressive kennels in the country and this gave Liam an opportunity to host a puppy show which attracted a large attendance from all over the country.

He also had his seasoned hounds on display, ably assisted by his right hand man Hubie Cunniffe. Neville Horsman, Alan Briscoe, Liam’s wife Dorothy, their son Daniel and Godfrey Gibbons continued to whip-in to Liam. But for much of Liam’s tenure as huntsman, Cyril Larkin and latterly, Cathal Gibbons were field-masters and they formed a lasting friendship and often joked that they would retire at the same time.

Many times Cathal would question if Liam and his hounds were spending too much time in a covert, but he admitted that Liam was always right as had such a good hunting instinct, and had complete confidence in his pack.

One could say that Liam’s other passion is hurling, something he has passed on to his children Daniel who grew up playing hurling, and Rachel camogie for the local Kilnadema/Leitrim Club. Both are also accomplished show jumping riders producing many young horses at home with Daniel jumping at Grand Prix level and recently arrived back from campaigning his string in Spain and Portugal.

As Liam stood aside on May 1st, his final task for the East Galways will be as official starter at the hunt point-to-point on Billy Treacy’s farm in Stowlen. He is delighted that Eoghan McCabe, a native of Co Meath, takes over as huntsman as Liam is familiar with Eoghan’s progress over the years as he is friends with both Ballymacad huntsman Kevin Donohoe and Kildare huntsman Peter Cahill, whom Eoghan whipped into for the last three seasons.

Eoghan is also one of the elite ‘Cut Bush Ten’ that finished a cracking hunt on Peter Cahill’s final day hunting the Kildare hounds.

Hunt chairman David Duffy said, on behalf of the officers and masters Olive Broderick, Alan Briscoe, Joe Cavanagh, Pascal Conroy, Niall Earls and the members of the hunt: ‘We would like to thank Liam and the McAlinden family for all the good sport and entertainment provided over the years, and for their future good health and good fortune and may they never be strangers.” 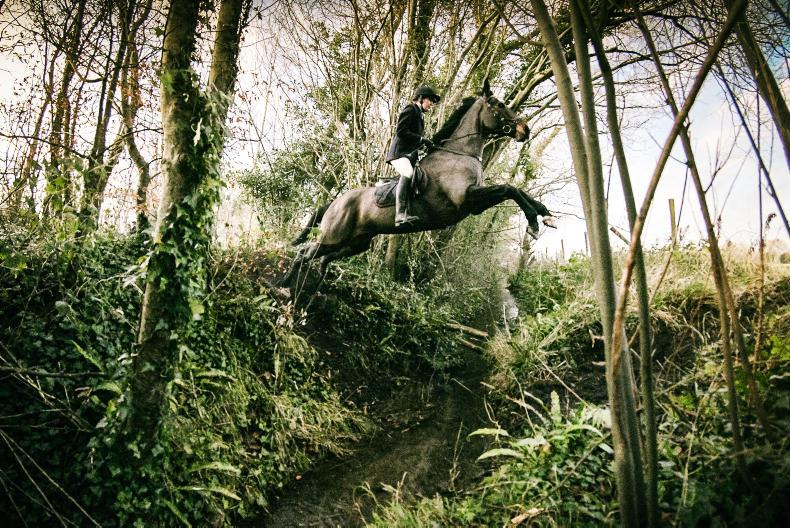 PICTURE DESK: Out and About
Hunting is in full swing and we bring you a flavour of meets nationwide 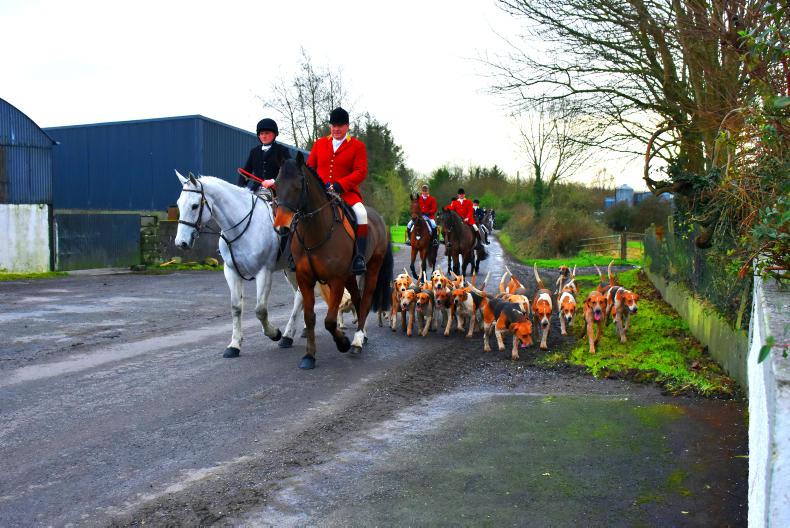 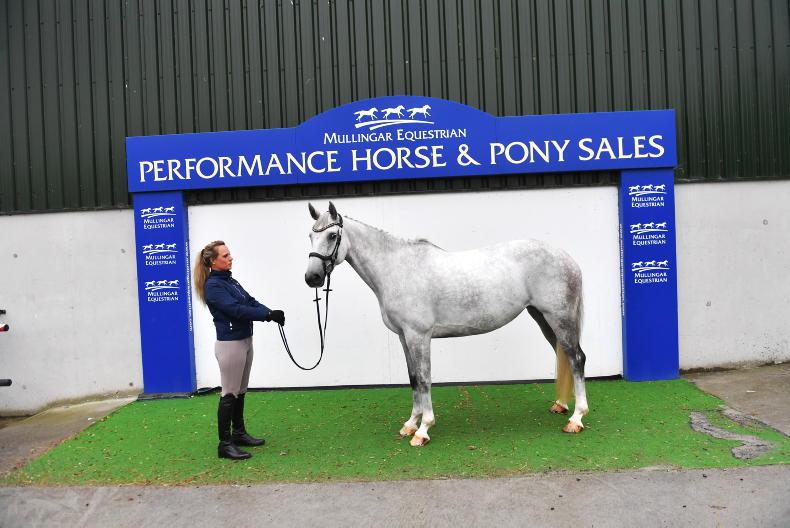 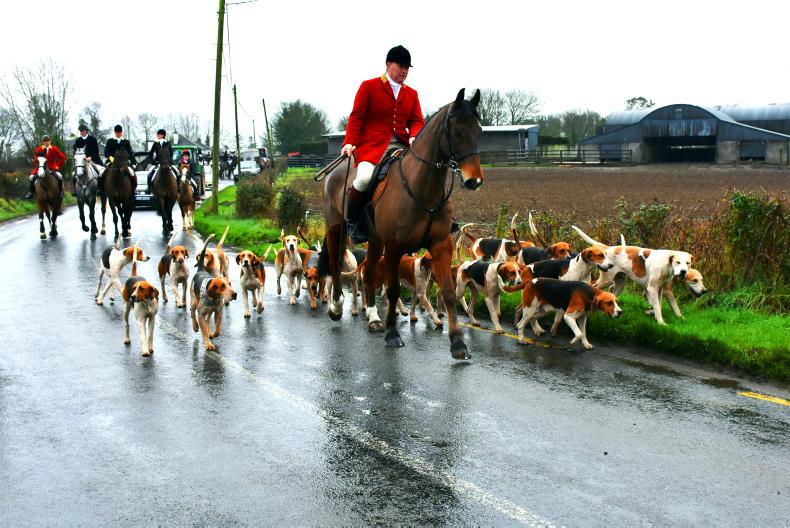