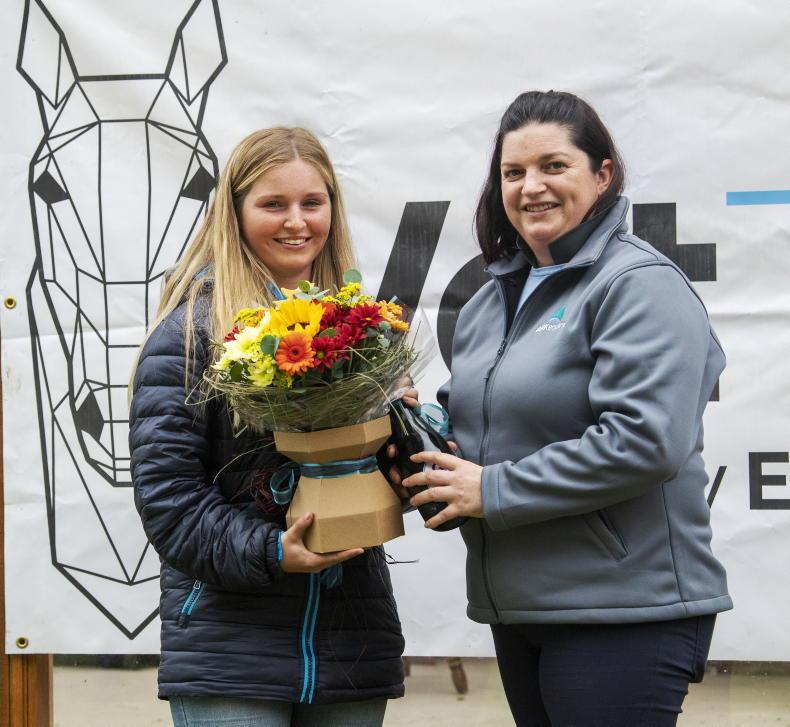 Leanne Foster received the award for the best groom. Leanne (left) was grooming for Ian Cassells and is pictured with Kirsty McCann of ARK Equine at Ballindenisk International \ Equus Pix Photography

HILLSBOROUGH’s Catherine Abbott, who has been attending events at Ballindenisk for the past 20 years – supporting her daughter Clare – was adjudged to have shown the true spirit of the sport over that time and last weekend was presented with the Chris Corballis trophy.

“I never got such a surprise!” said Catherine who is a board member of Eventing Ireland and chairperson of the Northern Region of the organisation. “If I ever have a spare hour or two at Ballindenisk, I get in touch with Joyce (Fell) and, if there’s a job I can do for her, I will.

“Last Saturday, Clare jumped her two horses early in the morning so, I spent the rest of the day judging a fence on the cross-country which I always enjoy doing. I was delighted to have been presented with the Chris Corballis trophy which is absolutely beautiful!”

The late Michael Hennessy was remembered at an evening reception held in Ballindenisk last Thursday week.

Michael, a director of the board of Show Jumping Ireland at the time of his death, was a very important member of the team at Ballindenisk where he ran the bar, judged show jumping or ferried people around as needed. He is very much missed by the Fell family who, having invited members of Michael’s family, all competitors and those attending the event to the reception, asked them to raise a glass in his memory.

Many congratulations also to Leanne Foster who deservedly received the ‘best groom’ award at Ballindenisk, Leanne works with Ian Cassells.