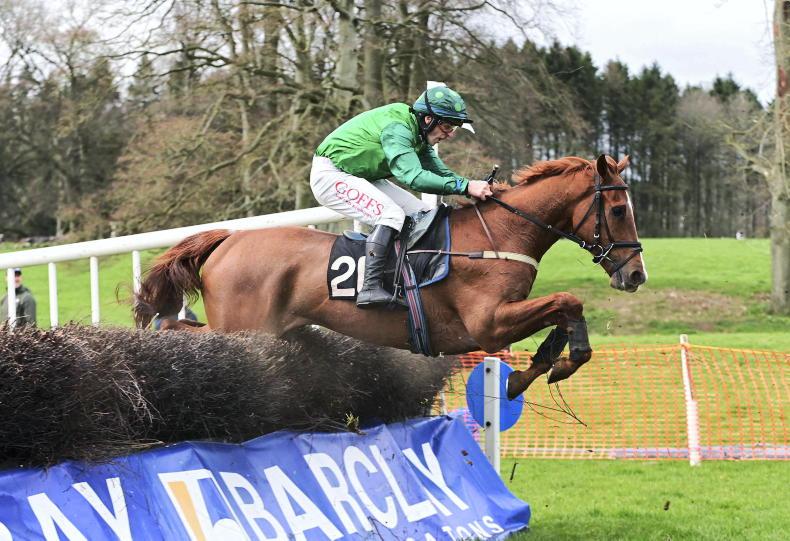 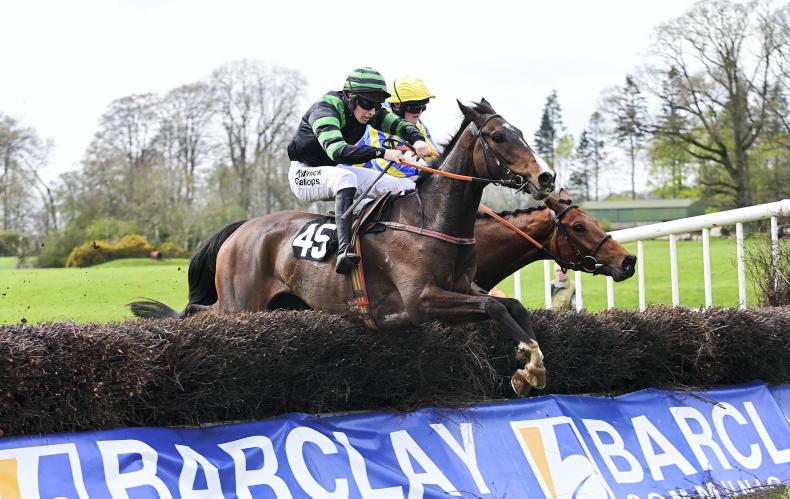 THE Crawford brothers have been having a fine time of it of late and that run continued at Loughanmore on Easter Saturday as they pulled off an opening race four-year-old double.

The field quickly thinned out from that point with Largy Force (5/1) swooping around the lot of them to lead at the last and score by a short-head from Rob James and Windtothelightning.

The winner, carrying the colours of Raymond Scullion and Martin McGrogan, was scoring for the Larne, Co. Antrim-based brothers of Ben and Stuart Crawford.

“She’s a lovely filly and I probably made hard work of it. I went right around the outside on the final bend but she was still good enough to get to the front,” said the winning rider.

“She went on and then probably just got a little bit idle in front. When the other horse came to her, she was always just doing enough.”

The four-year-old geldings’ maiden has a rich history at the Co Antrim venue, with it being won by the likes of Battleoverdoyen and Claimantakinforgan in the past, and this year’s winner looked right up to scratch.

It’s For Me (4/1 - 13/2) raced in rear throughout under Ben Crawford before the pair began to make their move after the second last.

They hit the lead at the last and won going away by eight lengths from the Declan Lavery-ridden He’s Ultimate. The winner was providing his handler, Stuart Crawford, with a seventh winner of the campaign.

“He’s a nice, young horse. We’re lucky that we have got the job of educating those horses and the pressure is not on to win. If they’re good enough, they’ll win,” said the winning handler of the Simon Munir and Isaac Souede-owned gelding.

“He was a little bit novicey in his jumping but the further he went, the better he got. That’s all he needs to do and he’ll go to the field now.” It was also a seventh winner of the season for the winning rider.

The mares’ open on the card disappointingly turned into a match race with only two of the five entries declaring.

It was a straightforward success for La Feline (2/5 – 2/7 favourite) who made all in the hands of Derek O’Connor, never coming off the bridle.

Her sole rival, Presenting Ana, finished 10 lengths adrift under Jack Hendrick. The winner is trained by Sam Curling in Co. Tipperary and has now, remarkably, never finished out of the first three in 10 starts between the flags.

“It was a great performance. She jumped from fence to fence so it was good,” said O’Connor of the John O’Leary-owned mare.

“It would be lovely if she could go for a hunters’ chase as she deserves a crack at it now. She has been ultra-consistent all year.”

THE five-year-old geldings’ maiden was the sole race to divide on the card, with the opening division going the way of Yeah Man (3/1 - 7/2) for Cormac Doyle and Jack Hendrick.

The son of Westerner was making his debut for the Doyle team and ran out a length winner over the Derek O’Connor-ridden Inis Oirr in a pulsating finish.

The winning handler said, of the Monbeg Farm Racing Partnership-owned winner: “He’s a lovely horse. He was doing everything really well at home. He just got a bit weak last year but we always liked him. He’ll be sold now.”

O’Neill went to the front on the turn for home on the son of Milan and they ran out four-length winners over the Colin McKeever-trained Cardamon Hill.

“He built on his last run at Dromahane. He was a bit backward early on but he has improved away and will probably go to the sales now,” said Bowe of the Milestone Bloodstock-owned winner.

The concluding winners’ race had a local feel to it with all six runners being northern-trained and it was the recent Downpatrick hunters’ chase third Faith Loving (4/5 – 4/6 favourite) who came out on top for Caroline McCaldin and Noel McParlan.

Carrying the colours of Alan McCaldin, the winning son of Ballingarry past the whole field between the third last and the line to win by two lengths from the Patrick Turley-trained Tareeshar.

The winning rider, who was recording his 200th point-to-point winner, said: “He was good. He’s a tough horse who jumps and gallops.

“I thought it would turn into a staying test so I tracked them into the straight and I felt that I always had them covered. I’m not sure of the plan but he might go back hunter chasing now.”

THE five-year-old mares’ maiden had a competitive look to it on paper but the aptly named Shecouldbeanything (2/1 – 9/4) turned it into somewhat of a procession.

She ran away with the race to score by 13 lengths from the John Walsh-trained Call The Barmaid.

Declan Lavery sent the winning daughter of Malinas to the front after the second last and she showed a taking turn of foot to quickly dispatch with the rest of her field.

The winner is trained by Patrick Turley, who also part-owns the gelding along with the winning rider, who said: “We didn’t think that she would be beat today. She’s a very honest and straightforward mare.

“She has a lot of ability. Hopefully she’ll go on to bigger and better things now.”

Northern Edge (S Dawson): The son of Ocovango ran a fine race on his debut to finish third in the first division of the five-year-old geldings’ maiden, and he looks sure to improve on that in the coming weeks.