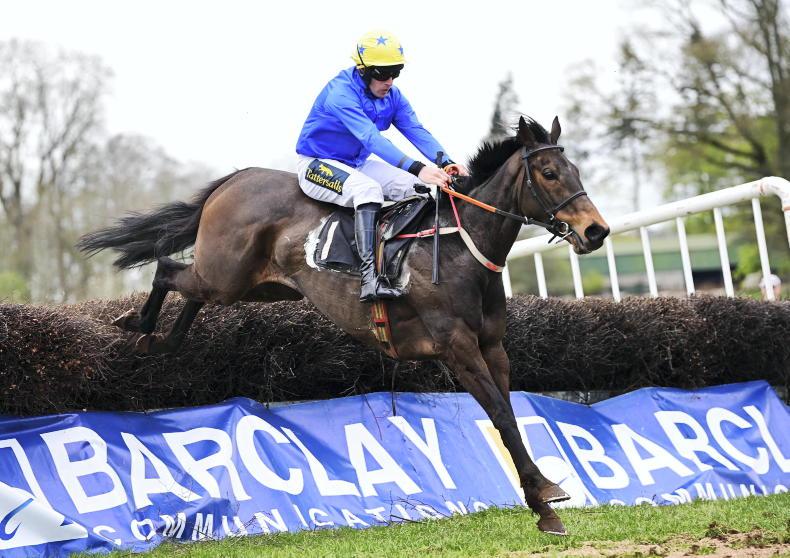 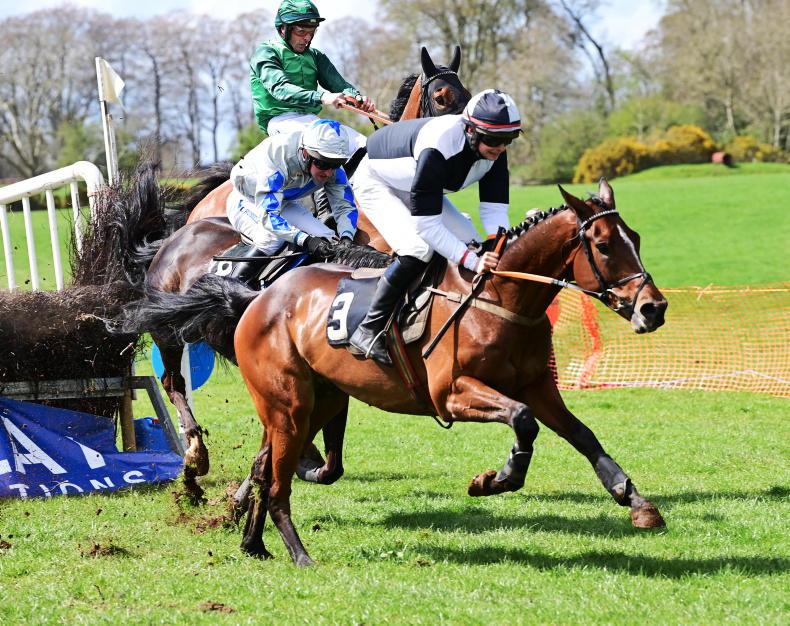 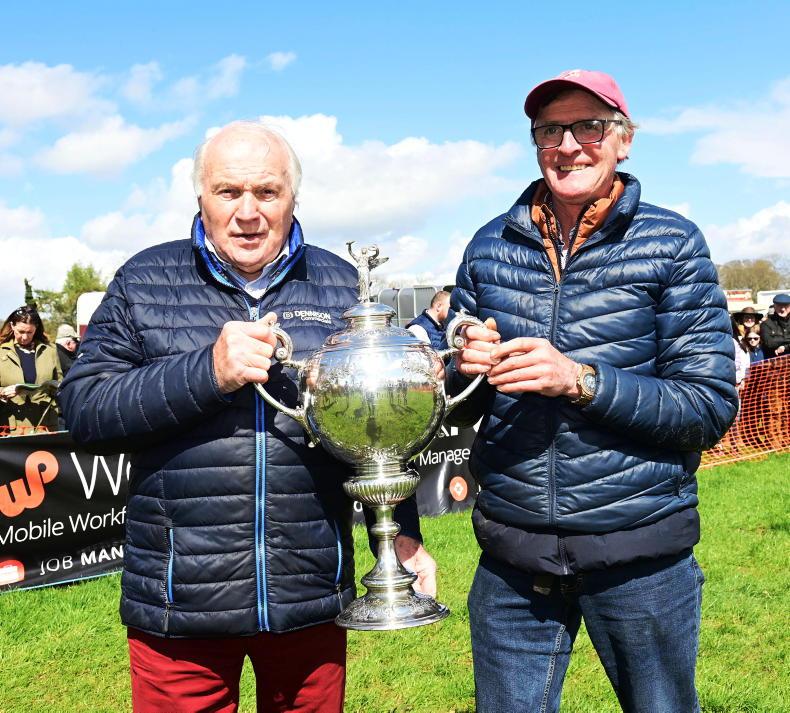 A SUNNY Easter Monday saw a large crowd in attendance at Loughanmore for their six-race card.

Champion rider Barry O’Neill was the man of the moment as he rode three winners from three rides on the day, kicking off in the mares’ winners’ race on Alice O’Byrne (4/5 – 5/4 favourite).

The former Taylorstown winner had finished third at that venue last time but she went two places better today, scoring easily under O’Neill by 15 lengths from the Robert Tector-trained Rock The Hill.

The winner was recording her second success between the flags and it was the first leg of a double on the day for County Fermanagh handler David Christie.

“She ran a great race the first time she ran for me up in Moira. We took her to Tinahely then and she had a horrendous fall at the last, she was beaten at the time, but it was a really bad fall,” said Christie of the Giverachance Syndicate-owned mare.

“When she came back, we could not get her right for love nor money. I said to the boys to take her home and just keep her at home for a while over the winter.

“She came back out here very well, and we thought if she could run to improve a bit from last year, she wouldn’t be far away. She has no limits jumping-wise, she will stay going now and we will try to get another run into her before the end of the season.”

The son of Beat Hollow made all of the running and won unchallenged by eight lengths from the Stuart Crawford-trained Stamp Your Feet. The winner was remarkably recording his eighth success from just 11 runs between the flags.

“He goes well on the ground, he has loads of speed and loads of scope,” commented Christie. “He’ll keep tipping away now. We might have a look at the champion hunter chase if he keeps going alright. Sure you know these horses, it’s a lot to be asking from them.

“It’s that time of year to keep going when you’re running on this tight ground and he’s too good a horse for that. I would have been very tempted to run him at Cork today only that the ground was changing.

“At this moment in time, we will just tip away at these and see where it takes us.”

The Barry O’Neill treble was completed in the concluding older mares’ maiden as recent Monksgrange third Near Dark (5/4 – 6/4 favourite) ran out a convincing 12-length winner.

The Andrew Latta-trained daughter of Westerner never really had a moment’s worry and was always to the head of affairs, with the Graham McKeever-trained Youghalbegood finishing best of the rest in second.

The winning handler said, of the Latta-owned mare: “She’s a lovely mare, she was sick for her first two runs, but she ran well the last day and she improved. She was impressive there. She might go for a winners’ race or a point-to-point bumper then on to Doncaster I’d say.”

Hold Up gets up

THE opening adjacent winners’ race saw only three runners face the starter and it saw somewhat of a shock result as the outsider of the three and the only maiden in the contest, Hold Up La Colmine (6/1 – 8/1) run out a game two-and-a-half-length winner over the Stuart Crawford-trained odds-on favourite Coco Masterpiece.

The Cormac Abernethy-ridden winner was held up in last early on before making his move between the final two fences.

“He gave him a great ride, I told him – ‘don’t let those boys tell you what to do, you follow and watch the whole race. You’re riding a nice young horse’,” said Colin McKeever of the Wilson Dennison-owned gelding.

“He ran a nice race in Borris house as a four-year-old. I was going to run him in the five-year-old maiden on Saturday, but there were a lot of nice horses in that, so I thought I’d let him take his chance here.

“They went a nice steady pace and he got into a nice rhythm. I know it was only a confined race, but it was a good confined race. He’ll go to the sales now.”

The six-year-old geldings’ contest had a dramatic conclusion as Toombridge and Noel McParlan held a slight advantage when coming down at the last, leaving Ballyhack (6/1 – 7/1) and Cormac Abernethy to storm through and score by a cosy 10 lengths at the line. It was a quickfire double on the day for the Dungannon, Co Down native Abernethy.

The winner is trained by Caroline McCaldin who said of the Alan McCaldin-owned gelding: “He ran well at Borris House before Christmas and Armagh is just such a tough track. He’s for sale now.”

THE older maiden saw the biggest field of the day with all 12 entries standing their ground, but it was Ohzark (5/2 - 4/1 favourite) who ran out a most convincing winner for the Co Wexford yard of Richard Black.

The son of Schiaparelli had only one previous run to his name, when sixth at Kirkistown in 2019, but he was always prominent here under Bertie Finn before kicking on at the second last to score by a distance from the Corrie Auchterlonie-trained Patriot’s Prayer.

“He has been off a long time. Harley Dunne had him as a four-year-old and did all the groundwork. I didn’t have to do much with him at all, only get him back fit again, so a lot of credit must go to Harley. We’ll see what the owners want to do now, I’m not sure yet.”

Toombridge (C.S. McKeever): The recent Castletown-Geoghegan second held a slight advantage when coming down at the last in the six-year-old geldings’ maiden, suggesting that his turn is only around the corner.