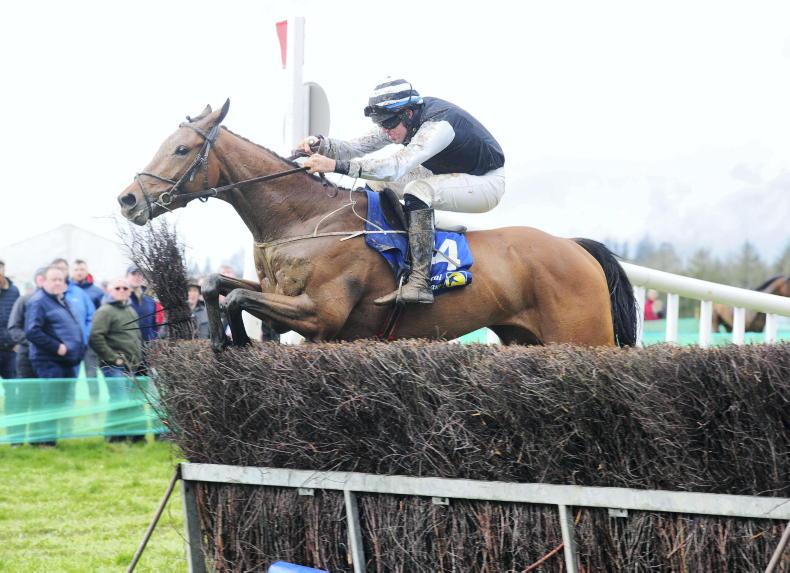 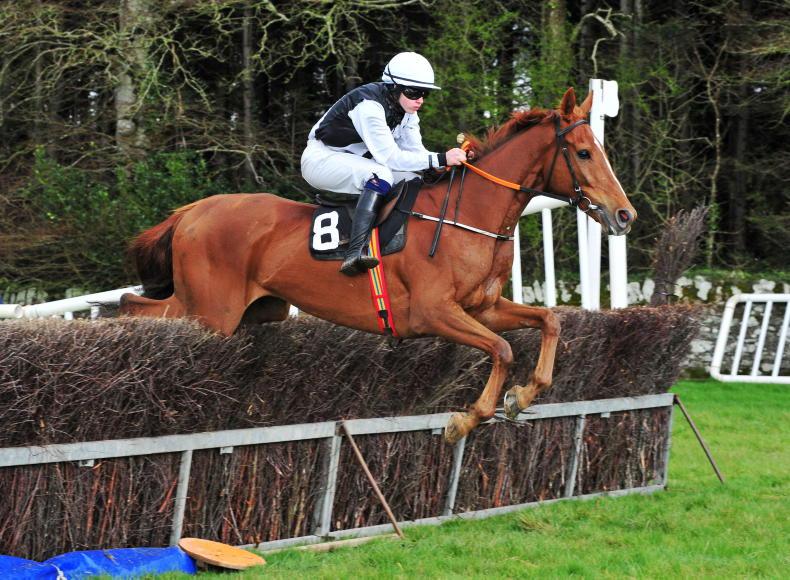 Golden Bald and Susie Doyle win the Curraghmore winners of one \ Healy Racing.
Previous Next

THERE was some competitive fare at Sunday’s Waterford Foxhounds meeting in Curraghmore and owner-trainer Mattie Flynn O’Connor’s The Gooner posted a taking debut performance by coming home as he pleased on the rain-softened ground in the four-year-old geldings’ maiden.

Ivegotdapower took the 12 runners along until he was joined by Bill Jack from half-way. The latter edged ahead with four fences remaining and The Gooner (2/1 - 3/1) was sent in pursuit by Brian Lawless from three out.

The victorious son of Flemensfirth, an early April foal who was a £39,000 acquisition by present connections at last year’s Goffs UK Spring Store Sale in Doncaster, moved to the front before the second last of the 12 obstacles.

While leaping out to the right at this penultimate obstacle, the eventual winner was soon gone beyond recall and he duly beat Bill Jack by 12 lengths, with the pair being the only finishers.

The Gooner, whose dam is a half-sister to former Troytown Chase runner-up Don’t Tell No One, was actually providing the Ballycrystal Stables handler with a first four-year-old winner of the season.

Flynn O’Connor remarked: “The Gooner is a lovely horse and he will now be sold. My horses were below par for a while this year, but they are back in top form again.”

The Pat Crowley-trained newcomer No But I Will (2/1 - 3/1), yet another Goffs UK Doncaster graduate as he was bought for £10,000 as a yearling at the south Yorkshire venue in January 2018, returned to the coveted number one slot with Mikey Sweeney in the first division of the five-year-old geldings’ maiden.

Battle Of Mirbat set out with the intention of making all in this 10-runner contest and he was tracked by Present Tara and No But I Will from half-way.

The winner, a son of Telescope, moved closer in second from three out as Robert D’ores arrived on the scene to hold every chance from before the second-last.

No But I Will assumed command approaching the last and with Battle Of Mirbat then departing here when held in second spot, it was left to Robert D’ores to chase home the British-bred with the winning margin being a distance.

“He’s a horse that we’ve always liked, but he’s still a big baby and we’ll find a new home for him now,” said Ballinamult-based handler Crowley of No But I Will whom his wife Hazel shares with Morgan Sheehan.

No But I Will, whose fourth dam Shebeen won four Group 3 races, was quickly added to this Friday’s Tattersalls Ireland sale at Cheltenham.

Handler Kieran Purcell and rider Shane O’Rourke attained a measure of recompense for the fall of Battle Of Mirbat by combining to win the second division of this same contest with Scamallach Liath (4/1 - 6/1).

Having fallen and pulled-up on his two autumn forays, the hooded Scamallach Liath was the only winner on the card to benefit from front-running tactics.

The son of Shantou led until newcomer Notnowted moved into pole position after two out.

Scamallach Liath was back in front on the run to the final fence and he was in no mood to be denied on the flat with three-parts of a length separating him from the promising Notnowted.

Endersen more than acquitted himself well by returning a further four lengths adrift in third spot.

Owner/trainer Purcell reported that Scamallach Liath, whom he acquired as a three-year-old, will now be prepared for a bumper.

SUSIE Doyle is experiencing a stellar campaign and the 23-year-old consolidated her advantage in the ladies’ championship by bringing her seasonal tally to eight aboard the Louise Lyons-trained Golden Bald (2/1 favourite) in the winner-of-one.

The recent Rathcannon scorer, representing his trainer’s partner Nicky Teehan, tracked the front-running Focus Point virtually throughout until edging past the pacesetter on the outer after the second last.

The French-bred was well in command when Focus Point unseated at the last when held in second spot, Mizuma then occupying the runner-up slot a distance adrift.

“He always travelled and jumped well here. I would like to thank Louise and Nicky for letting me ride him,” reported Doyle of Golden Bald.

Three-horse handler Richard O’Hara, who trains just two miles from the course in the townland of Kilbunny, kept local punters happy by recording his third success of the season courtesy of Master Campbell (2/1 - 3/1) in the closing confined hunt maiden.

The Delton Syndicate-owned Master Campbell, a 10-year-old grey that was unraced until this year having had a previous career as an event horse, recovered from a first-fence error to pick up the running for Luke Murphy before the last.

He was always holding runner-up Shannon Glory thereafter with the winning margin being two lengths.

ALEX Harvey, who rides out for John McConnell, Peter Flood and Ellen Doyle, made his initial mount for Michael Murphy a winning one by landing the older geldings’ maiden for novice riders aboard Dream View (6/4 - 7/4).

The Ballinaboola runner-up, while having to be ridden along three out, responded to his partner’s urgings by leading before the last.

Having thrown the faster leap at this final fence, the giant-sized Dream View asserted on the flat to dismiss Turnthelightsoff by two and a half lengths in the familiar Redbridge Stables silks.

The other Michael Murphy from Co Wexford as in Kilmore-based owner-trainer Michael John Murphy struck with Smart Lady (4/1 - 6/1), bred by his near-neighbour Frank Marshall, in the 16-runner mares’ maiden.

The Jet Away-sired Smart Lady, having pulled-up on her previous two starts in February, was always on the pace from half-way and she got on top with Mikey O’Connor from before the last to see off newcomer Harries Annie by two lengths.

Notnowted (P.J.F. Doyle): This homebred newcomer by Notnowcato was only beaten three-parts of a length into second by a more experienced opponent, having led briefly after two out. Compensation should be easily attained.