Title: PARROT MOUTH: Hats off to the band of brothers 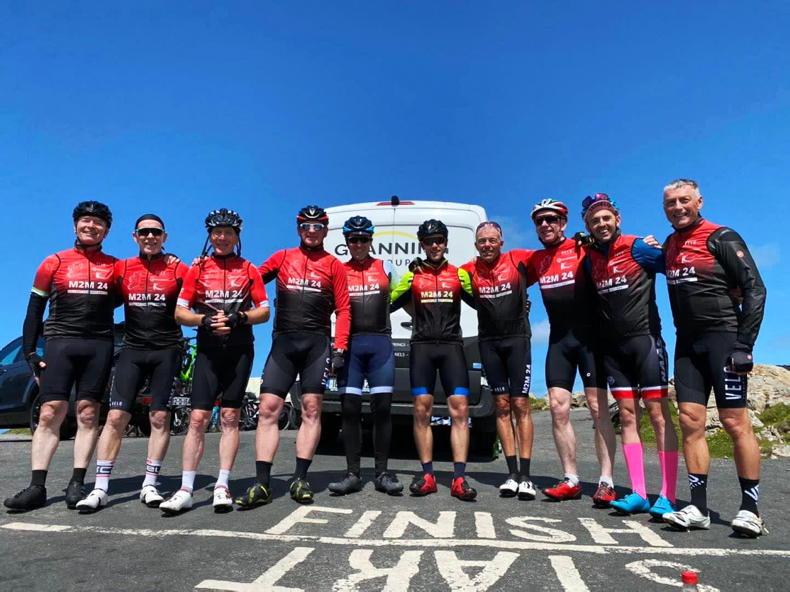 Lorcan Wyer (third left) and his comrades in arms \Twitter.com

CONGRATULATIONS to clerk of the course Lorcan Wyer and his intrepid band of cyclist friends on an amazing achievement. Lorcan and his cycling buddies recently completed a cycle from Mizen Head to Malin Head, a journey of 578km in 23hrs 53mins 52secs.

And all in aid of Jack and Jill Children’s Foundation which must raise €4 million every year to fund the unique home nursing care for sick children.

“Yes, for a bunch of old men, it wasn’t bad, we’re delighted,” said Lorcan with a laugh. “We started off at half two on Friday afternoon and completed the cycle within 24 hours. It was an amazing experience and we had the great support of six lads helping us. The logistics were difficult and they had three cars with two in each car as backup.

“We started from Mizen and we had seven 10-minute stops. We were getting tight for time so the last two stops were only five minutes each. We had such fun, and ‘effed’ each other out of it.

“I’m 57 and most of the lads are in their 50s except for two in their 30s we call the ‘young bucks’. We were training pretty hard since Christmas and the current amount raised is €35,000 and hopefully we might get a bit more in for this great charity from the generous readers of The Irish Field.

“The weather was kind to us, only the last 500 metres was lashing up Malin Head. Whoever says Ireland is a small country hasn’t cycled it! But it was worth it and Donegal was beautiful.

“I always think of Donegal as Dolly Partonish and I’m more of a Kiera Knightley man myself – the Midlands!”

“We have absolutely great memories and we try to do something for Jack and Jill every year. “We will go bigger and better next year!”

Go to the Lorcan Wyer page on JustGiving and also check out the website www.jackandjill.ie.

WE had a huge number of entries for last week’s Dubai Duty Free Irish Derby competition. The five lucky winners of a pair of tickets are Eoin Darcy, Margaret Roxburghe (Dublin), John Cusack (Laois) and two different Gerry Hanleys – one from Naas and one in Salthill, Co Galway.

Concerned that ‘Mr Hanley’ might be submitting multiple entries, Parrot Mouth carried out some detective work. The Gerry Hanley in Naas is a Curragh regular and racehorse owner, while the Salthill version is a musician who performed at the recent Galway Races launch in the Guinness Storehouse.

Winner alright then, but we still want a photograph of the two Gerry Hanleys at the Derby. Watch this space.