Harry McCalmont's Norelands Stud sold both the 3,100,000gns top lot and a 1,300,000gns son of Siyouni. Godolphin bought three of the four seven-figured lots and seven of the top 10 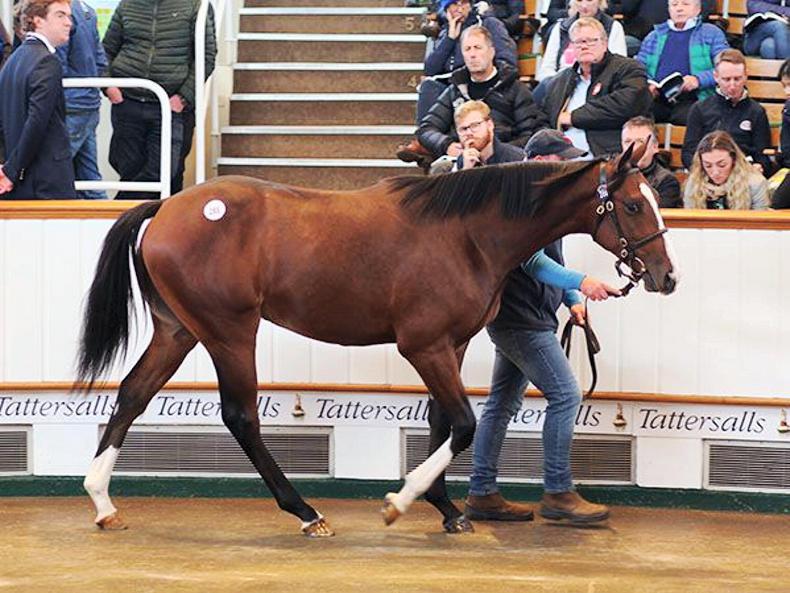 Harry McCalmont's Norelands Stud consigned two seven-figured lots on day two of the Tattersalls October Yearling Sale. One was this Frankel - Fleche D'Or colt and the half-brother to Derby and Arc hero Golden Horn was bought by Godolphin for 3,100,000gns \ Tattersalls 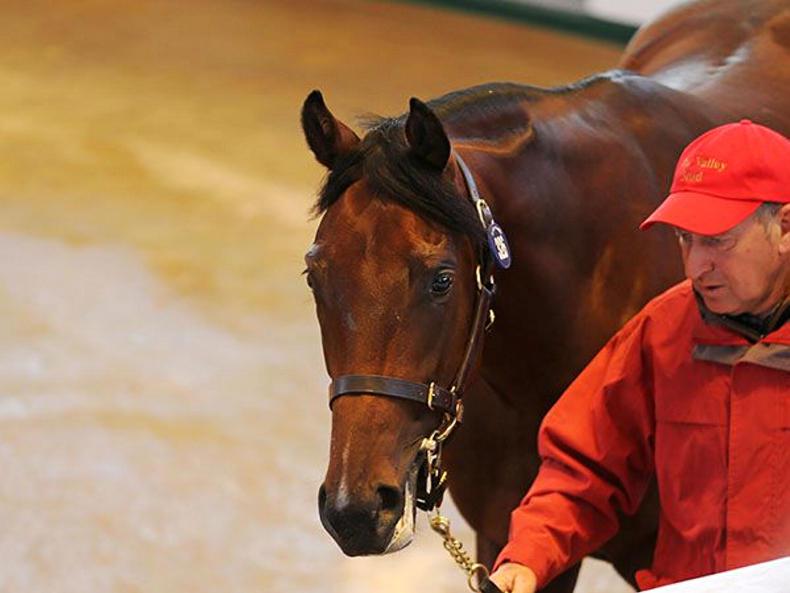 This Kingman - Grace And Favour colt was consigned by Coln Valley Stud, he has classic-winning relations and cost Godolphin 2,300,000gns from Book 1 of the Tattersalls October Yearling Sale \ Tattersalls 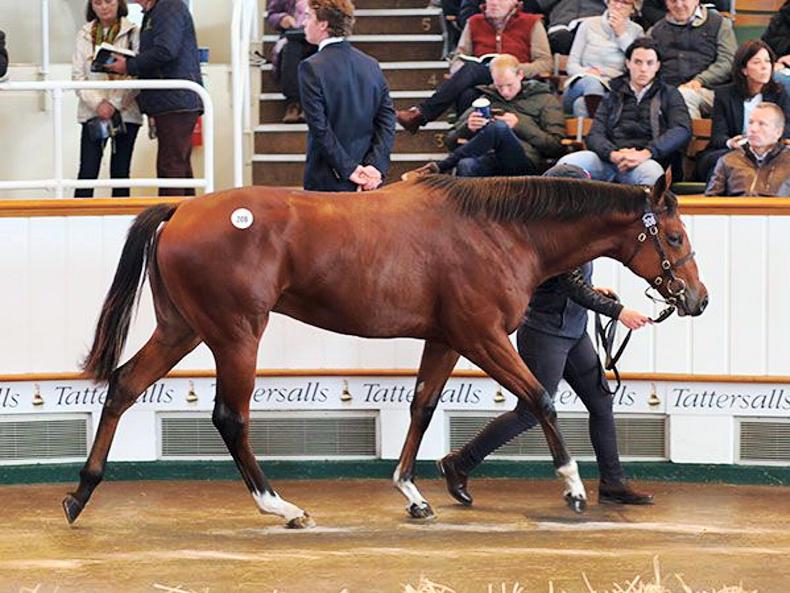 Norelands Stud consigned two seven-figure lots on the second day of Book 2 of the Tattersalls October Yearling Sale including this Siyouni colt for whom M V Magnier paid 1,300,000gns \ Tattersalls 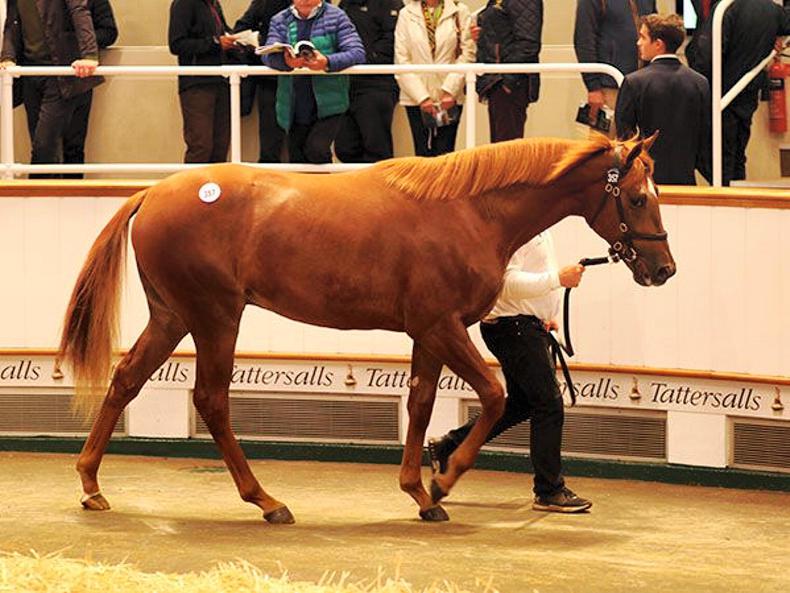 Godolphin bought this full-brother to Grade 1 winner Line of Duty for 1,000,000gns \ Tattersalls
Previous Next

A FRANKEL half-brother to the 2015 Derby and Arc winner Golden Horn was the star turn on the second day of Book 1 of the Tattersalls October Yearling Sale when selling for 3,100,000 guineas, the second highest price for a yearling colt in the world this year.

Consigned by Harry McCalmont’s Norelands Stud, the colt caught the attention of plenty of suitors, with Juddmonte Farms, SackvilleDonald’s Alastair Donald and Chad Brown all landing bids before M V Magnier and Anthony Stroud took over as the price passed one million guineas. The battle to secure the son of the Dubai Destination mare Fleche D'Or finished when Stroud’s bid of 3,100,000 guineas was left unanswered by underbidder Magnier.

It was a superb result for Norelands, the consignor having sold Lot 208 to MV Magnier for 1,300,000gns earlier in the day.

"I am not often lost for words, but I think I am now," said McCalmont with a smile. "This is easily the best price we have had in the sales ring, the second-best we achieved this morning!

"I have to thank my team – they have done a fabulous job, this colt walked around like a king today. There has been a lot of interest in him, there were some serious people who liked him, however you never know what is going to happen until you get to the ring."

McCalmont bought the Fleche D'Or at the Tattersalls December Mares Sale in 2012 for 62,000 guineas after she had foaled the subsequent champion three-year-old colt Golden Horn.

"I like buying mares from such successful breeders as Anthony Oppenheimer," said McCalmont. "You know the mares in the pedigree will always get the best covers and go to the best trainers."

The now 13-year-old Fleche D'Or had a Frankel filly foal this spring, who will be retained, and she is in-foal to Sea The Stars. The Kingman colt out of the Montjeu mare Grace And Favour became the result of a lifetime for Nicolas Jones’ Coln Valley Stud when selling to Godolphin for 2,300,000 guineas.

The son of Juddmonte Farms’ exciting young stallion is out of a half-sister to the five-time Group 1 winner Fame And Glory and to the dam of 1000 Guineas winner Legatissimo.

The colt was knocked down to Anthony Stroud on behalf of Godolphin despite a determined bid by Phoenix Thoroughbreds’ Tom Ludt, who stood alongside Aquis Farms’ Shane McGrath and Ballylinch Stud’s John O’Connor.

"Our previous best came last year when we sold a Showcasing colt out of Grace And Glory for 600,000 guineas," said Jones in between congratulatory kisses and hugs from his many friends.

"Lots of people told us he was a lovely horse, but you can't really expect a sale like that! We have six flat mares and one National Hunt mare – we like to keep the numbers to this size and maintain the quality. We sell the colts and keep the fillies – we just have one more colt to sell this year.

"All my thanks has to go to Ian Emes, he runs the farm – he does all the work, all the foalings; he has produced this horse beautifully."

Of the decision to send Grace And Favour to Kingman, Jones said: "It was a bit of decision to make as it is always a risk to use a stallion in his third year. It has worked out – we might have to send her back to him again."

The mare had a Pivotal filly foal this year and is in-foal to Sea The Moon. Jones bought Grace And Favour's dam Gryada in 2006 for 180,000 guineas at the Tattersalls December Mares Sale via agent Amanda Skiffington. The first lot to top the million guineas mark on the second day was the Siyouni half-brother to this year’s 2000 Guineas winner Magna Grecia who was knocked down to M V Magnier for 1,300,000 guineas.

The son of the Group 3-winning Galileo mare Cabaret caught the attention of Anthony Stroud, the Hong Kong Jockey Club’s Michael Kinane and David Redvers who all made bold plays to secure the colt but were unable to better Magnier’s successful bid.

The colt was consigned by Norelands Stud, and Harry McCalmont said: "We are delighted. We were hoping for seven figures, but you never know. I am quite emotional.

"He was bred by Bob Scarborough, who also bred Magna Grecia, whom we sold at the Tattersalls December Foal Sale for 340,000 guineas.

"This horse, just like his older brother, has a good temperament, which is so hugely important – he behaved all the way through. He is also an exceptional athlete, a very good walker."

The colt is the highest-priced yearling sold so far at auction by his Haras de Bonneval-based sire. The Godolphin team will be hoping it will be a case of history repeating itself after they purchased the full brother to their 2018 Grade 1 Breeders’ Cup Juvenile Turf winner Line of Duty for 1,100,000 guineas via Anthony Stroud.

It was at this sale in 2017 that they purchased that Galileo colt for 400,000 guineas from Peter Stanley’s New England Stud and it was that vendor again today who consigned the colt on behalf of breeder Christopher Hanbury.

Phoenix Thoroughbred’s Tom Ludt and M V Magnier both made bold plays to secure the colt, but it was the Godolphin team that triumphed.

The pair are out of Jacqueline Quest, who was first past the post in the 1000 Guineas but subsequently demoted to second after the race. She was bought by Charlie Gordon-Watson Bloodstock at the 2011 Tattersalls December Mares Sale for 600,000 guineas on behalf of Hanbury.

"She is a great mare and has she been successful financially in the sales ring, but also on the track," said Stanley. "This is a gorgeous horse and hopes were high, but to get to seven-figures... well it is a big sigh of relief. You dream about this and there is a lot of hope.

"Christopher has been building up a very nice broodmare band at Triermore Stud in Ireland, using some good stallions – it is great to see this rewarded."

Book 1 of the Tattersalls October Yearling Sale continues at 11am on Thursday, October 10th with the third and final session.