“I liked his performance – he saw them all off and handled the track," - William Buick 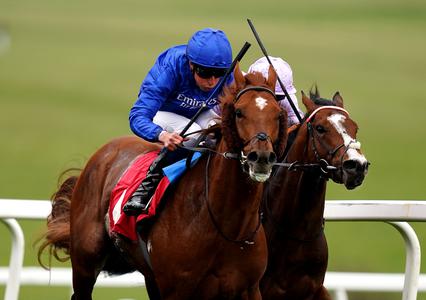 Nahanni, sent off the 9/4 favourite, will take his chance at Epsom having earned his ticket with this success.

Godolphin are blessed with a wealth of classic hopes and Nahanni joined the elite band with a cosy success in the Cazoo Blue Riband Trial at Epsom.

The son of Frankel completed a hat-trick, staying on strongly after making virtually all the running under William Buick.

Though he was pressed on both sides by Grand Alliance, who bagged the inside rail, and Zain Sarinda, who stuck on stoutly, the partnership always looked to have plenty in the locker and they went on to score by half a length.

Runner-up Grand Alliance had a neck to spare from Zain Sarinda.

The winner, sent off the 9/4 favourite, will take his chance at Epsom having earned his ticket with this success.

Nahanni strikes in the Listed Cazoo Blue Riband Trial for another nice prize for the boys in blue at @EpsomRacecourse @CazooUK pic.twitter.com/sxQLqaYDMh

With trainer Charlie Appleby absent, assistant trainer Alex Merriam said: “He has had four runs this season, so we will probably put him away now and hopefully come back for the Derby.

“I say definitely, but we are a long way out. He gets the entry for winning that, but there is a lot of water to be crossed between now and then, but that will be the plan.

“We have a few other irons in the fire and we will have to see how they play out in the next few weeks, but that will be the plan.”

Nahanni had produced a runaway success in novice company at Leicester 18 days previously and had a change of headgear on this occasion.

“He did plenty in the blinkers last time and we just thought the cheekpieces should be tried this time,” said Merriam.

“It is lovely. We are in a very spoilt position as Sheikh Mohammed has some lovely horses to train, so we are very fortunate.”

Buick added: “It was a nice performance and he came on again. We were back in trip from Leicester but that was not really a concern. He got on the front and he is very comfortable up there.

“I liked his performance – he saw them all off and handled the track, which is obviously key, so he is a horse who stays very well as well.

“Every time they came to him, he went again. At the top of the straight, I thought it would be me and Frankie (Dettori, aboard Mighty Ulysses) and then obviously he had to fight all the others off after that.

“He handled the track and this was the most competitive race he has faced, so he has learned plenty.”