“I’ve no idea which is the best horse, this is how we find out – they are all bred and reared to be in the Derby. It’s very hard to not give a horse a chance." Aidan O'Brien 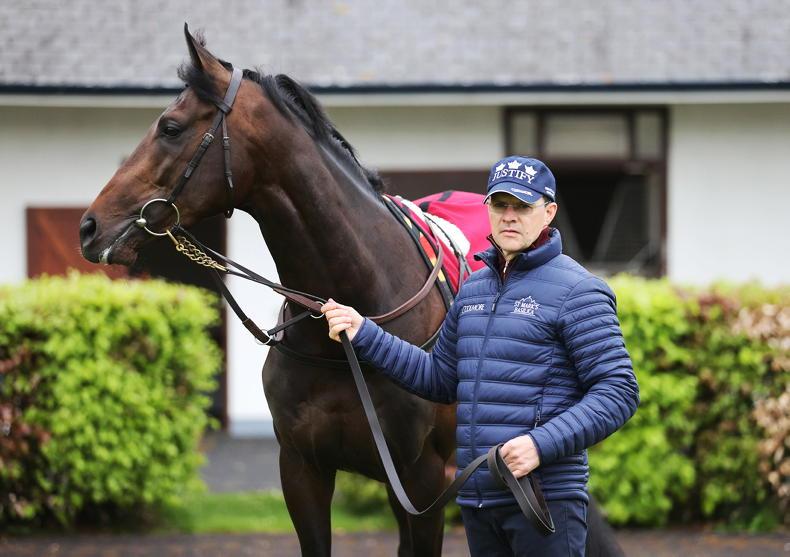 Despite having long-time ante-post favourite Luxembourg ruled out due to a muscular problem, O’Brien still holds plenty of aces in the Epsom classic.

He won both Derby trials at Chester through Changingoftheguard in the Vase and Star Of India in the Dee Stakes and continued his dominance when United Nations beat Charlie Appleby’s well-touted Walk Of Stars at Lingfield.

Arguably the deepest trial took place closer to home, however, and as Stone Age crossed the line five and a half lengths clear in the Leopardstown contest, he was installed as the new favourite.

“I think Ryan would find it hard not to ride the horse from yesterday,” O’Brien said during a press morning at his Ballydoyle stables.

“We know the way they’ll be ridden – Changingoftheguard will go forward and that would suit the horse that won yesterday.

“The one that won at Chester over a mile and a quarter (Star Of India) will also go forward but he’s a little bit lazy, so he might end up tucking in a little bit. The horse that won at Lingfield will go forward as he stays well, Charlie’s horse (Natural World) went a good gallop there.

“I’d imagine Ryan will find it hard not to ride Stone Age, but I don’t know.

“You’d have had to be impressed with him. You’d have liked something to have led him. There was one that ran at Cork (French Claim) we thought would lead but he didn’t, so there was no point in messing him about so we let him bowl along.

“The good thing about him is that he got a lot of experience at two, he was always happy to be dropped in and he learned a lot but we weren’t running him to teach him.”

He went on: “In all the trials we were very happy to make the running and set a good pace to see whether they were going to stay the trip or not and that’s what Ryan did, he bounced them all out and if someone else wanted to lead then great, if not he’d go.

“I’ve no idea which is the best horse, this is how we find out – they are all bred and reared to be in the Derby. It’s very hard to not give a horse a chance.

“I was never worried they (Stone Age and Changingoftheguard) never won at two, not at all. If we wanted them to win at two we could have, but we always treat two as an indication for three.

“That is why Stone Age was contesting all those big races, he even ran in a Group 1 over seven (furlongs). He had group form at two, so that was exposing him enough for breeders to see that he was a very good two-year-old.

“He didn’t surprise us yesterday, I was delighted with him but we’ve always liked him and thought he was a very high-class horse. If you go back and look at his two-year-old form, he got beat in a Group race at Leopardstown and was running through the line and it was the same in France over a mile and a quarter in soft ground.

“If you went back through that form, you could see there was always going to be better to come.

“Obviously I’m delighted to have horses that can be competitive, especially with Luxembourg on the sidelines. They’ve done their trials now and the three-year-olds need to keep improving.

“It’s never cut and dried that we know what will happen. We try to have them ready for their races, talk to their riders about trip and track and then everyone has a chat with detail and data and everything.

“We learn at the same time as everyone else. The only time we really find out is when they are put together.”

One O’Brien three-year-old who did not quite live up to expectations first time out is Point Lonsdale, but he still remains in the Derby frame despite finishing down the field in the Guineas.

“We always thought last year that he wanted to go a mile but we never went a mile, because we were keeping him at seven because he was the best horse we had at that distance at the time. Looking at him though, you’d always say that he was going to be a middle distance horse this year,” O’Brien said.

“He’s a very good horse and I’d expect him to step forward a lot from the Guineas and we’re giving him the time to help him do that, rather than rushing him back into the Dante – there’d be no reason for doing that. Obviously we thought he’d run a bit better than he did at Newmarket and he was a bit disappointing, but he’s still very much in our Derby plans.”