Just one final step...
You must confirm your email address by clicking on the link we’ve sent to your email address.
You are only one short step away from reading 5 free Field+ articles.
NEWS: Historic Irish stud farm to be sold

NEWS: Historic Irish stud farm to be sold
By Leo Powell on 03 July 2020
Leo Powell has news of the sale of Eyrefield Lodge Stud, birthplace of Pretty Polly

THE historic Eyrefield Lodge Stud, in the possession of the Loder family for more than 120 years, is to be sold. Home to Sir Edmund and Lady Sue Loder, this world-renowned farm stands on 160 acres and the main residence, extending to more than 5,000 sq. ft., is in very good condition. It has seven bedrooms and five bathrooms.

Eyrefield Lodge Stud has a prime location, minutes from the Curragh racecourse. One of the lost famous lodges on the Curragh, the main residence was built in 1760, rebuilt in 1798 and renovated and enlarged by Major Eustace Loder when he purchased it in 1897 from Henry Eyre Linde who trained two Grand National winners there.

Originally built as a hunting lodge, it is believed that Empress Sissi of Austria hunted from Eyrefield Lodge. Major Eustace Loder in 1901 bred the immortal Pretty Polly, some of whose descendants still occupy the stables. With a magnificent garden and mature wooded parklands, the farm also houses the graves of Pretty Polly, winner of 22 of her 24 races including the 1000 Guineas, Oaks and St Leger, Derby winners Spearmint and Spion Kop, champion European sprinter Marwell and her European champion daughter Marling.

In addition to 55 stables, there is a stud groom’s house, gate lodge, staff flat and a cottage. Edmund Loder has continued with the tradition of breeding top-class winners since he inherited the property in 1967, including the Irish Oaks winners Unite and Vintage Tipple.

Paddy Jordan of Jordan Town and Country Estate Agents is handling the sale which is by private treaty. 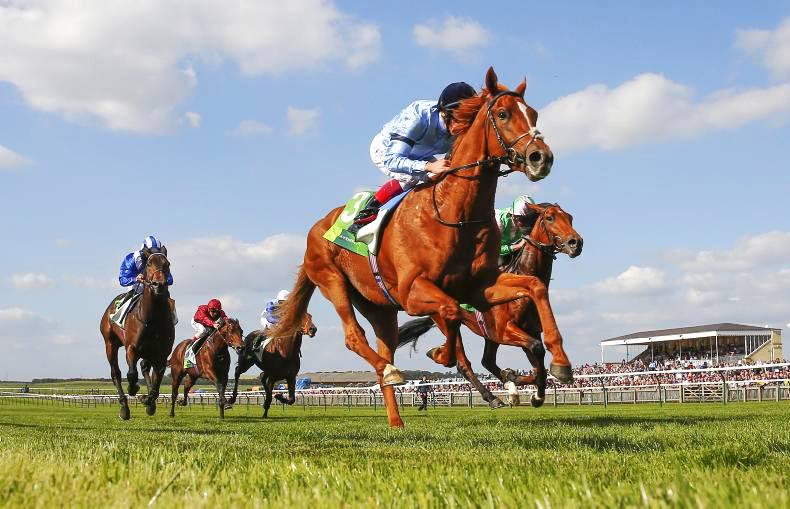