Just one final step...
You must confirm your email address by clicking on the link we’ve sent to your email address.
You are only one short step away from reading 5 free Field+ articles.
NEWS: Gosden bids final farewell to magnificent Enable

John Gosden and his staff at Clarehaven waved goodbye to Enable for the final time today (Thursday), as the great mare left for her new home at Banstead Manor Stud.

It had already been announced the dual Prix de l’Arc de Triomphe winner will be covered by Kingman, also owned by Khalid Abdullah’s Juddmonte Farms operation.

The daughter of Nathaniel was retired last week, with connections resisting the temptation for one last hurrah at Ascot or at the Breeders’ Cup after the brilliant mare was bogged down by heavy ground bidding for a third Arc win.

“Enable goes to the stud today, she’s just had a wind down after the Arc and actually it’s very pleasurable as she’s leaving happy and sound, very full of herself and very contented,” Gosden told Nick Luck’s Daily Podcast.

“It’s wonderful to have had all that racing at two, three, four, five and six and retire her sound. Mr (Frankie) Dettori was here, popped the silks on and sat on her, like the old pictures we have in the yard.

“The ones you really love are the ones that try, give everything and want to work with you. She was the most fantastic filly for her sheer appetite and joy for training.

“It’s like working with people, when you have someone with a positive mindset it makes it more pleasurable.”

He went on: “Of course, she had an international following so I will probably sleep a little better now she’s gone as the weight of responsibility will be lessened somewhat.

“In a sense there was a bit of relief when the decision was made to retire her. We all know what happened in France, that’s life, there had been talk of Ascot but looking at the ground I’m glad we ruled that one out.

“The other option was to go to Kentucky, she’s won a Breeders’ Cup but Churchill has a longer stretch than Keeneland which suits her style of running, so while she is in great nick, we decided we’re not going to go any more.”

Gosden endured a rare blank on Qipco Champions Day, which in part he put down to the testing conditions, but four of his beaten stars will be back for more next year.

“Palace Pier pulled a shoe off leaving the stalls and was quite sore, he hasn’t been ridden since. He probably did very well to finish third, but he’ll be all right for next year,” said Gosden.

“Mishriff will come back as well, he found the ground too deep. Lord North will hopefully be back and the great Stradivarius will try to win a fourth Gold Cup.”

He said: “At the moment we’re considering Lord North for the Turf, he hated the ground at Ascot. We have Terebellum, who didn’t run at Ascot thank goodness, she could go for the Filly & Mare and we’re also looking at that for Mehdaayih, who actually ricked her back in the Prince of Wales’s so has only had one run since.” 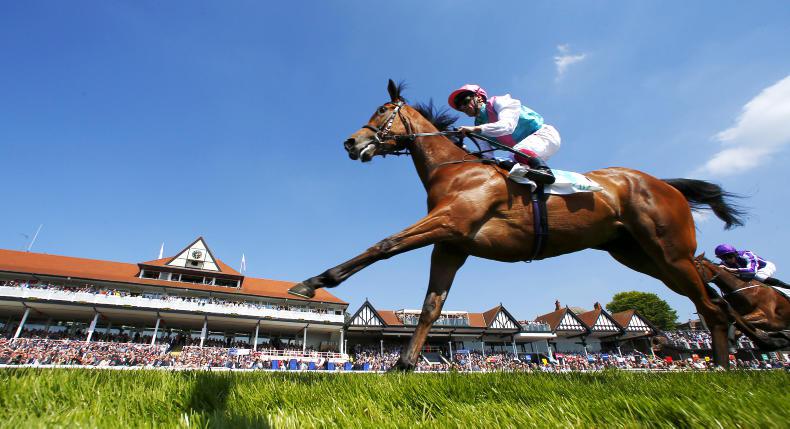 Racing News
CHESTER WEDNESDAY: Enable for Epsom after Cheshire Oaks win
By Ian Carnaby on 11 May 2017
More in Latest News
News FREE
SALES: Aunty Bridy heads opening day of December Mare Sale
News FREE
Walk In The Mill on course to bid for Becher hat-trick
News FREE
Skelton all set for Tingle Creek on Politologue
Classifieds
Place ad
Get full unlimited access to our content and archive.
Subscribe to The Irish Field
Unlimited access to The Irish Field via your computer, mobile device, tablet or newspaper delivered to your door.
Subscribe now +
Already a subscriber? Sign in