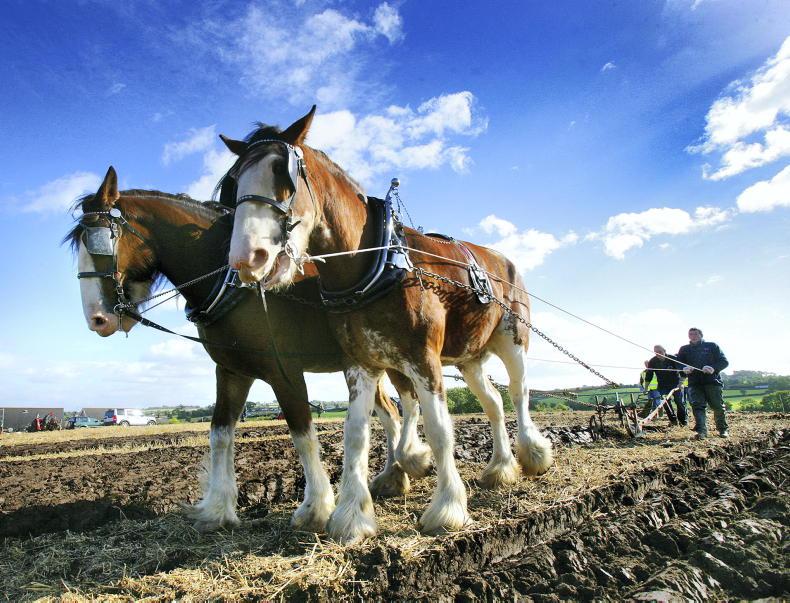 Brothers Victor and Raymond Scott from Limavady and their Glebeview Clydesdales enjoyed success at the Royal Highland Show (this file picture above is the brothers working their horses during the NI vintage ploughing championships at Kilwarlin, Moira. Raymond takes control of the horses while Victor handles the plough) \ Irish Farmers Journal

THE Glebeview Clydesdales team of Raymond and Victor Scott arrived back at their Limavady base last Monday afternoon to much acclaim having won the heavy horse turnout championship at last week’s 200th staging of the Royal Highland Show.

In addition to winning the James Clark Aristocrat trophy as winners of the sixies class and the James Buchanan & Co challenge salver as champions on Sunday, the team also won the singles class on Thursday, were third in both the four-horse team on Friday and the pairs’ class on Saturday and were fifth in the three-horse unicorn on Friday.

Victor was the winning driver in the singles and pairs classes but otherwise it was his grandson, Ben McLaughlin, who took charge and he was delighted with the team’s success.

“We had eight people looking after six horses, our dray and our stud cart and it was very busy with at least one class a day,” said Ben, who splits his time between the horses and working on the family farm.”

One of the horses was Glebeview Shane (by Dillars Cracker) who was hitched up most days and, with Ben’s mother Joanne Scott driving, finished 10th in the ladies’ class on Saturday. “Shane is 17 this year so this was probably his final appearance at the Royal Highland where he has won six times,” said McLaughlin. “He will, however, be in our team travelling over to the Great Yorkshire Show (July 12th to 15th).”

Three horses represented the Limavady operation in the ridden class on Thursday but none were in the ribbons. Two were partnered by riders who keep their horses on livery at Glebeview while the other was ridden by Ben’s girlfriend, Jodie Creighton, who was making her debut on these heavy horses at the Royal Highland.

Better known as a show jumper and show horse rider, Creighton, who helped with the turn-out during the week while also competing in the working hunter section of the show, is unsure whether she would take part in a ridden Clydesdale class again.

“It’s a lot different to what I’m used to!” said the Randalstown rider.