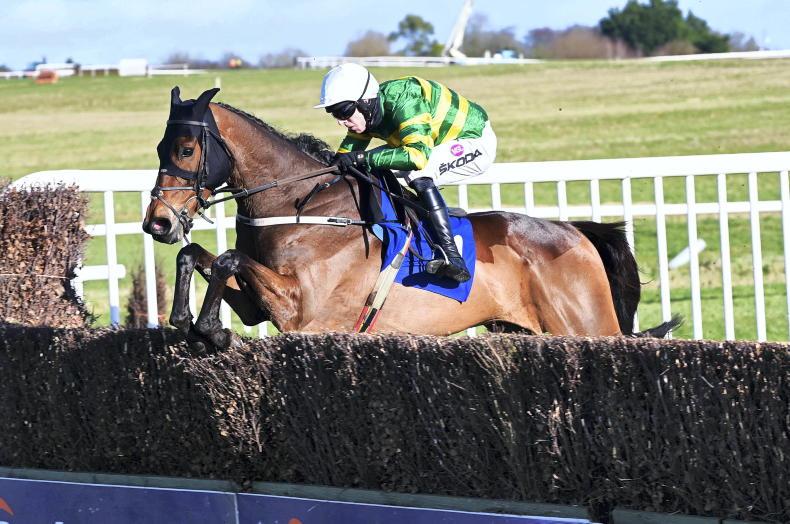 Vera Verto gets the vote after starting out over hurdles with three solid efforts in decent contests.

She was beaten just over 8l into fifth by The Tide Turns last time having previously run third to Icare Allen at Leopardstown and that calibre of form looks to put her on a different footing to these opponents.

Douglas Dc has the capacity to run well. He was placed in four-year-old bumpers on his first two outings and then ran creditably in a 1m 4f flat maiden at Dundalk last month. He should be thereabouts if taking to this discipline.

Only Sky is respected after beginning her jumping career with a third to Champion Green at Naas while The Role Model is another to keep in mind on his last two runs.

This should provide Gavin Cromwell with a double as Global Export is hard to look past.

His second place finish to Man O Work at Naas in January was a nice effort and he again showed up well to chase home Hms Seahorse at Fairyhouse a few weeks ago.

Evergreen And Red faded badly in the closing stages of the Naas maiden won by Man O Work and a bad mistake at the final flight eventually consigned him to an eighth-place finish. He is surely capable of better and can take a step forward here.

Devils Cape is interesting as a son of Canford Cliffs and comes from a decent middle distance flat family that has produced a few capable jumpers.

Next Best: Evergreen And Red

Belle Metal has a few questions to answer coming into this but she still looks the one. A listed bumper winner last season, she has run respectably against the geldings in two maiden hurdles at this track.

She was fifth to Au Fleuron here in December and a month later she filled the same position behind Jaycean when tackling 2m 4f. The drop back to 2m shouldn’t be a problem for her and she can deal with Jumping Jet.

The latter was a wide-margin winner of a Gowran bumper this time last year and has reached the frame on both her starts over timber.

Take Tea was disappointing last time but still looks capable of a place.

On his debut for his current trainer, Sparkling Stars turned in a taking effort to land a 2m handicap hurdle at Naas last month where he came from off the pace to win with more to spare than a winning margin of 3l would suggest.

An 8lbs rise in the weights for that effort doesn’t look excessive and the longer trip of this race will work in his favour.

Gain De Cause has gone up 17lbs in the weights for a pair of handicap successes at Punchestown, the more recent of which yielded a short-head success over Krabat.

These look the two to focus on, although Silvertown certainly has a chance based on his three runs before his pulled up effort at Punchestown last month.

Next Best: Gain De Cause

Lady Rita is a speculative choice. She had plenty to do when brought down three out in a maiden hurdle at Punchestown last week but a better guide to her chances would be her third to Daily Present at Fairyhouse in January and her fifth to Glens Of Antrim at Limerick the previous month.

A possible threat is the French import Hermann Clermont. He was placed a few times in France with third place finishes in claiming chases at Auteuil in September and October.

Pat’s Pick is a lively contender but probably will have to better his last effort at Kelso while Malton Grove should progress from his debut at Naas in November.

This looks a gilt-edged opening for Gentleman De Mee at graded level. The 135-rated hurdler started off over fences with respectable showings in races by Ferny Hollow and Haut En Couleurs before registering a 34l victory in a 2m beginners’ event at Thurles last month. He looks impossible to oppose.

Grange Walk might be the one to chase him home having posted a fine effort in a 2m handicap chase at the Dublin Racing Festival where he finished a 1½l second to A Wave Of The Sea. He sets a decent enough standard with a rating of 140.

De Name Escapes Me hasn’t tried fences for almost two and a half years. However, he has dropped 11lbs in the weights since last running over the larger obstacles and he indicated in the autumn that he retained plenty of ability in a premier handicap on the flat at Naas before running fourth in a Pertemps Qualifer at Punchestown.

He hasn’t been at his best on his last few runs, but this represents a significant drop in grade. He can see off Nobody Home who comes here off a second to Gevrey in a handicap chase at Fairyhouse where he was beaten just ¾l.

The winner didn’t let the form down in a Grade B contest at Naas last weekend.

Next Best: Nobody Home

This should see All Class bring up a hat-trick of wins. A major gamble when scoring on the flat for David Dunne here last March, she has won two of her three runs for Ronan McNally.

She was an easy winner over an extended 3m 1f chase at Punchestown in November and also won easily over hurdles over 2m 4f here in December.

La Chanteuse ran respectably to take third in a 2m listed chase at Naas last month which was won by Elimay and she could make her way into the frame.

Daphne Moon showed up well behind Jeremys Flame in a smart contest at Thurles last week and could easily make her presence felt.