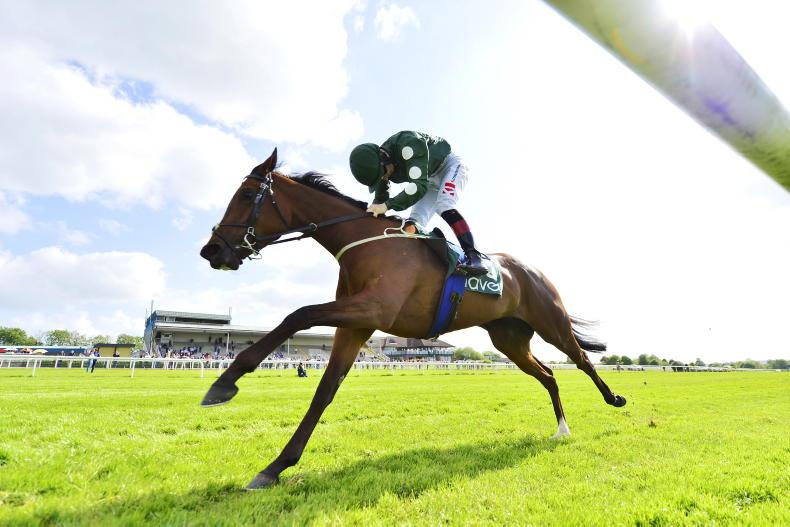 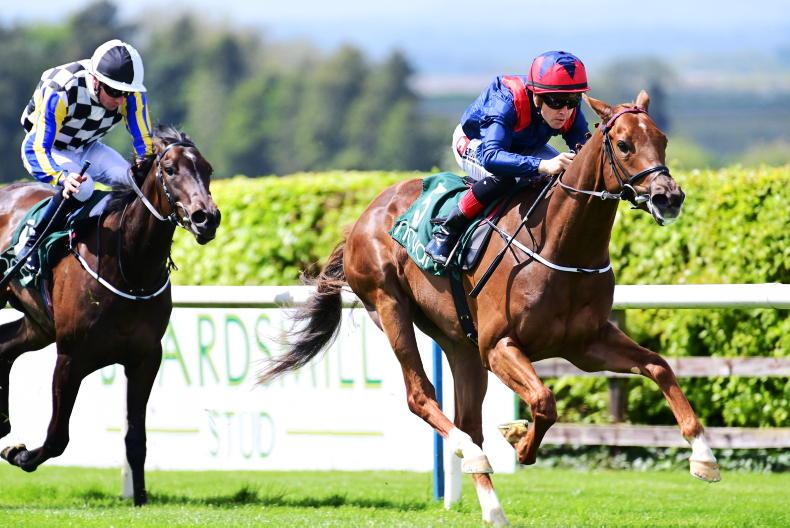 THE decision to up Cairde Go Deo markedly in trip was rewarded with a listed success for the Ger Lyons-trained daughter of Camelot who turned this year’s renewal of the Irish Stallion Farms EBF Yeats Stakes into an utterly one-sided affair.

A disappointing field of five turned out for this one-mile-five-furlong event and the market was headed by Arbutus who won a maiden on his debut over this course and distance last month. Sadly, he suffered a fatal injury early in the straight and at this stage the Colin Keane-ridden winner was already in the process of outclassing her rivals.

The only horse in the field rated above 90 was showing in front well before the turn-in and was untroubled from to win by eight lengths. The Mark Dobbin-owned winner actually went off favourite for last year’s Moyglare Stakes and ran a very solid third in the 10-furlong Salsabil Stakes here last month so, in truth, this was a success her talents merited.

“She’s all about the trip and loves the ground,” said Lyons. “We were going to wait for the Munster Oaks (in Cork) but we took a view at the start of the week that this might cut up.

“A mile and a half and good ground is what she wants and at the minute we would be looking towards the Munster Oaks. Time will tell whether she is worth stepping up into the big game.”

The 47-65 rated handicap over the same distance as the day’s feature produced an interesting winner in Isaiah who was returned a 17/2 chance having been as big as 40/1 when betting on the race opened.

The John McNally-owned gelding was making his debut for Gavin Cromwell having fallen to a career low mark of 46 and he ran out a convincing winner under Gary Carroll after striking the front well over a furlong from home.

At the line, Isaiah had just under five lengths to spare over Mythical Times and he could be the type to progress very well from here.

THE market proved a notable pointer for the older horses’ sprint maiden as Willie McCreery’s three-year-old newcomer Charlemont, who was as big as 8/1 in the morning, went off a well backed 2/1 favourite and won accordingly.

This McCreery-owned son of Starspangledbanner was fitted with a visor for his first start and turned in a professional and classy display. He powered through the race in second for Billy Lee and brushed aside the pace setting War Effort nearing the final furlong en route to an impressive five-length win over the 72-rated Gobi Star.

“The dam wore blinkers all the way through her career and he wears them to concentrate on his job. Sprinters can’t afford not to concentrate,” observed the trainer.

“He’s a gorgeous horse and flourished over the winter and we were just waiting for nice ground with him.”

The durable eight-year-old Only Spoofing took his career tally to 10 wins from 60 starts as he repeated last year’s success in the five-furlong handicap.

A runner-up in the Dash at Epsom after winning this race in 2021, Kevin Coleman’s charge had dropped some 15lbs in the weights in less than a year and he was backed to take advantage as he returned at 5/1 having been as big as 20/1 earlier in the day.

On the climb to the finish that he knows so well, Only Spoofing timed his charge to perfection under Mikey Sheehy as he headed Ajax Tavern in the final yards and reached the line a neck ahead of the strong finishing Arnhem.

“We were hoping with the track and the step back to five he could run well. I think we’ll do the same as last year and go to Epsom and then on to the Curragh on Derby Weekend,” stated Coleman, who trains the winner for Seamus Mannion and Francis Durbin.

Curraheen Princess (9/1), who won three times in four starts for Des Donovan towards the end of last season, added to her haul as she landed the 47-65 rated five-furlong handicap on her second appearance for trainer Nicky Stokes.

Joe Doyle produced her with a nicely-timed challenge to lead inside the distance and she got home by three-parts of a length from the unlucky looking Amazing Emma who was forced to bide her time for a run at a crucial stage of the race.

This was a first winner on the flat for Fethard-based Stokes.

MICHAEL O’Callaghan, who is so often one of the major powers of the juvenile scene, took the wraps off a nice type in Harry Time in the Irish Stallion Farms EBF Maiden over just short of six furlongs.

A graduate of last month’s Craven Breeze-Up Sale, this colt was backed from 7/1 into 4/1 on track and he more than looked the part under Leigh Roche. He arrived with a sweeping charge on the outer to lead over a furlong from home and he was soon in command before running out a cosy length-and-a-quarter winner over fellow newcomer Broadhurst who put in some good late work to secure the runner-up spot ahead of the favourite Beauty Crescent.

“He loved the ground. I’m delighted he went and did it the way he did because if he didn’t, the others are no good at home! We’ve run a yardstick now and we have a nice bunch to run,” declared O’Callaghan. “I think he could be a Coventry Stakes horse.”

There was another nice maiden on show at the other end of the card and distance spectrum as Joseph O’Brien’s Vega Magnifico (15/2) bolted up in the 10-furlong maiden.

The Rectory Road Holdings-owned son of Lope De Vega lined up off a respectable fourth to Boundless Ocean at Leopardstown last month and he confirmed form with Newfoundland whom he had back in sixth that day. The winner produced a smart turn of foot for Dylan Browne McMonagle to quicken into a decent lead well over a furlong from home and he ran out an impressive three-and-a-quarter-length winner to suggest a significant step up in class would hold no fears for him.