Saintfield Santas, US success for Graham Watters and racing's support for Tiggy’s Trust are among the news of this week 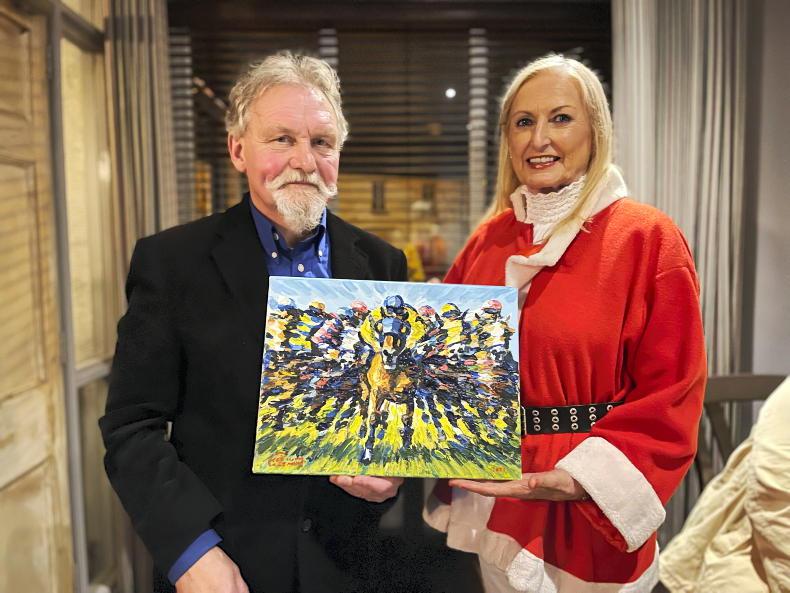 ONE equestrian social event which went ahead last year was the annual Saintfield Christmas Charity Santa Ride and its organiser, the tireless Joan Cunningham, recently launched the 15th running of the Ride which is due to take place on Saturday, December 4th.

Participants and their supporters should be in Andrews’ Yard on the Lisburn Road well in time for an 11am mulled wine and mince pie reception when Christmas music playing in the background will help everyone get into the festive spirit. Joan tells us that the yard has been extended in anticipation of a large turnout. At 12 noon, the Santas will mount up, move out and make their way behind the ‘Real Santa’ in his magnificent horse-drawn carriage to the Christmas tree in the town centre where those waiting will be entertained by Hugo Duncan, Box Car Broad and Gerard Dornan. At approximately 1.30pm, the whole area will be transformed into a sea of red as the Ride arrives and the ‘Real Santa’ alights from his carriage to meet and greet children gathered around the tree.

Participants should remember that at some stage, as the Ride makes its way to and from the town centre, sport horse breeder, equestrian journalist and Irish Horse World contributor Ruth Loney will be judging the best turned-out Santas and there are plenty of spot prizes. Entries are now open and will be taken online at www.saintfieldhorseshow/charityride.com or click on the link on the Saintfield Christmas Charity Ride Facebook page. The cost of the ride is adults £20 and children £10. Further details, contact Joan Cunningham on 07775 860744 (0044 7775 860744) or email: joancunningham1@gmail.com.

ARMAGH trainer James Lambe was delighted when Brian Hughes, who began riding out for him at the age of 14, was crowned champion National Hunt jockey in Britain at the conclusion of the 2019/2020 season and was equally as pleased last Sunday when Graham Watters claimed the same title in the US.

“Although he is from Co Meath, Graham really started off in racing up here with me riding in a lot of point-to-points and on the track before moving over to work with Lucinda Russell over in Scotland.

“His first win on the track was on Kircassock Vic in a hunters’ chase at Downpatrick (December 2009). This was his fifth year riding in the States and he finished off the season with a double last Sunday for Jack Fisher at Charleston.”

When back in Ireland recently, Hughes rode out for Lambe and perhaps Watters will do the same as he is due over this side of the Atlantic shortly to marry Scotland’s Rosie Allen.

McCoy and Walsh join up for Tiggy

MONEYGLASS native A.P. McCoy, the former multiple British champion National Hunt jockey, will be among those supporting the launch of Tiggy’s Trust at Cheltenham on Friday, December 10th as will former multiple Irish champion, Ruby Walsh.

A charitable foundation, Tiggy’s Trust will use the funds raised at this event, and the many others which have been held since the rider’s tragic death in June, to assist young people both by offering mental health support, through recognised organisations, to those who need it, and also providing training and education to help young aspiring equestrians achieve their goals.