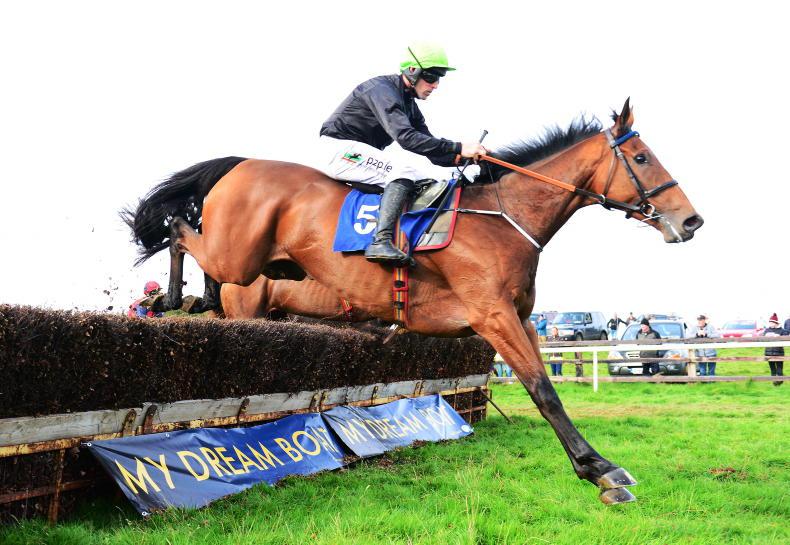 Pictured winning at Castletown-Geoghegan in 2019, the Callie Berry-bred Do Your Job won the Future Champion Novices’ Chase at Ayr on Surday \ Healy Racing

IT’s either a feast or a famine so after a number of weeks when I couldn’t fit in all the locally-bred, owned, trained, ridden, whatever-connected winners, there is a sparcity of them for today’s column.

One spotted on the flat however was the McCracken Farms-bred Facteur Cheval who, on Tuesday at Saint-Cloud, landed a mile maiden on turf for unraced three-year-old colts and geldings by five lengths under Gerald Mosse.

Trained by Jerone Reynier, the Ribchester gelding is the second of four foals out of the unraced Shamardal mare Jawlaat, a half-sister to three winners headed by the Teofilo mare Tantheem whose four victories included three at Group 3 level.

Over jumps, trainer Michael Scudamore saddled his first Grade 2 winner when the Richard Patrick-partnered Do Your Job justified his position at the head of the market in the extended two and a half-mile Future Champion Novices’ Chase at Ayr on Saturday.

This was a fifth track success, to go with one between the flags, for the eight-year-old Fame And Glory gelding who was bred by Dromore veterinary surgeon Callie Berry.

The bay is out of the Epervier Bleu mare Full Of Birds, who won twice over jumps in her native France, and is thus a full-brother to Highland Charge and Hunters Yarn and a half-brother to other multiple winners in Ballytober (by Kahyasi), Draytonian (by King’s Theatre) and Down Ace (by Generous).

Earlier on the card, the three-mile Novices’ Champion Handicap Chase was also won by the favourite, the Nicky Henderson-trained Dusart who rallied close home to beat Sounds Russian by half a length with the Stuart Crawford-trained Now Where Or When seven and a half lengths back in third.

The winning seven-year-old Flemensfirth gelding, who was bred out of the Terimon mare Dusty Too by dual Olympic event rider Virginia McGrath, is owned by Ronnie Bartlett on whose behalf he was purchased by Ian Ferguson as a three-year-old for €85,000 at the 2018 Derby Sale.

Consigned to that Tattersalls Ireland dispersal by Ballincurrig House Stud on behalf of Fiona Magee, Dusart is, of course, a half-brother to Simonsig (by Fair Mix) and Drumcliff (by Presenting) among others.

Brian Hughes rode one winner at that Ayr fixture, the Ruth Jefferson-trained Autumn Return (another by Fame And Glory), a Turtulla maiden winner in January who justified favouritism in the bumper on her first track start.

The Co Armagh-born jockey didn’t ride on Sunday but recorded a double at Kelso on Monday to bring his seasonal tally up to 192 heading into the three-day festival at Aintree.

However, he misses today’s Randox Grand National day and instead heads to Bangor.