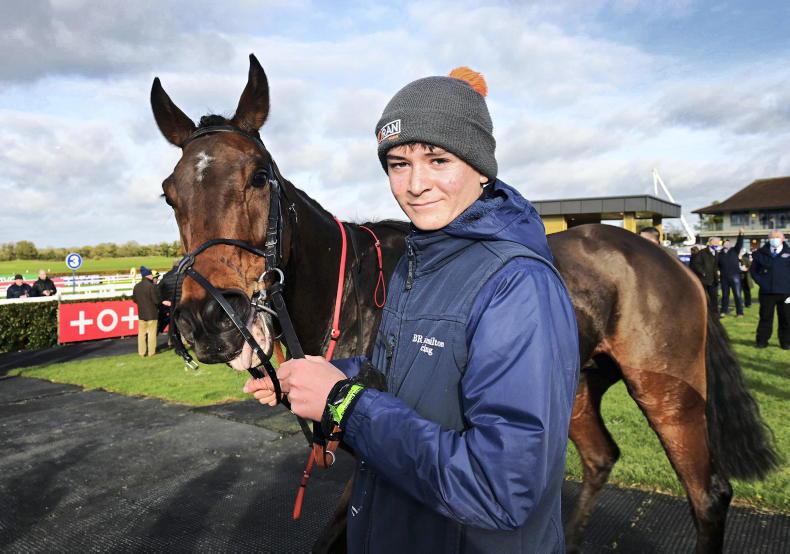 THE period under review was a good one for northern National Hunt trainers as David Christie wasn’t alone in saddling winners.

The five-year-old Heeraat gelding, who runs in the colours of the trainer’s wife Shauna, was sent off as the 9/4 favourite having won last time out at the same track in the hands of Jody McGarvey.

We liked what Noel had to say to irishracing.com about Maghera amateur McGill who has partnered three winners from 10 rides in point-to-points this season, two in novice riders’ opens for David Christie and one, in a mares’ maiden, for his father Gary.

“That’s the lad’s first winner on the track,” commented Kelly. “He’s had three point-to-point winners in the last three weeks. He’d a bad injury last year but he’s flying now. He works for me every day and is a good rider and a well-mannered cub.

“He’s dedicated to his job and very healthy in what he eats and drinks. Hopefully he’ll continue to improve and get a bit of luck.”

Another horse to record back-to-back wins, but this time at different tracks, was the Brian Hamilton-trained Easca Peasca who added victory in the two-mile handicap hurdle at Navan on Sunday to that in a four-year-old maiden hurdle over the same trip at Gowran on October 1st.

Sean O’Keeffe rode the Born To Sea gelding on the first occasion but 5lbs-claimer Shane Fitzgerald was on board the bay on Sunday when, having led after the final flight, he was all-out to hold off the O’Keeffe-partnered Cotteemacavennigoal by a head with the 3/1 favourite, Brides Hill, a further one and a half lengths back in third. Easca Peasca is trained by Hamilton for the Yes We Will Syndicate.

The bumper winner on Sunday, Gringo D’Aubrelle, who is now trained by Gordon Elliott for Bective Stud, was in the care of Co Wexford trainer Donnchadh Doyle when winning his point-to-point maiden at Loughanmore in October last year.

We mention the Saddler Maker gelding as the bumper ran under the banner of the Kevin Bell Repatriation Trust, the Newry-based cross-border charity which “aims to alleviate the financial hardship of bereaved families repatriating the body of loved ones who have died abroad in sudden or tragic circumstances back to Ireland”.

KBRT was represented at Navan by trustee Damian Ruddy and his wife Valerie who presented the winner’s trophy to Valerie and Noel Moran.

The charity was recently presented with a cheque for €7,500 which was raised by the McKeown family of Bleary at a horse show held The Meadows Equestrian Centre, Lurgan in memory of their daughter Angie who died suddenly in April while at University in England.

A former show jumper and passionate animal lover, Angie at one time used to keep her horse at The Meadows with the McCusker family.

Northern riders are in the winner’s enclosure

WHILE Brian Hughes continued to add to his seasonal total in the period under review by riding six winners, we were delighted to see Patsy Cosgrave score twice at Abu Dhabi last Sunday to record his first wins in the 2021/22 Emirates Racing campaign.

Between the flags, there was a win at Tattersalls on Saturday for Noel McParlan on board the Caoimhe O’Hare-owned, Liam Lennon-trained eight-year-old Winged Love gelding School Lane in the winners of one.

The following afternoon, right down in Dromahane, trainer Stuart Crawford and his amateur brother Ben got off the mark for the season when Raymond Scullion and Martin McGrogan’s Poli Roi landed the open as the odds-on favourite.

At this Duhallow meeting, the Ciaran Fennessy-trained Rockanrye made a successful debut in the Gain five-year-old mares’ maiden in the colours of her Co Down breeder, Patsy Murphy.

The Court Cave bay is the eighth of nine foals (only four of whom were named) out of the Zaffaran mare All But Two who comes from the family of Silver Birch and Alexander Banquet.