Title: LIMERICK SATURDAY: Follow the Steps for a clearer passage at Limerick 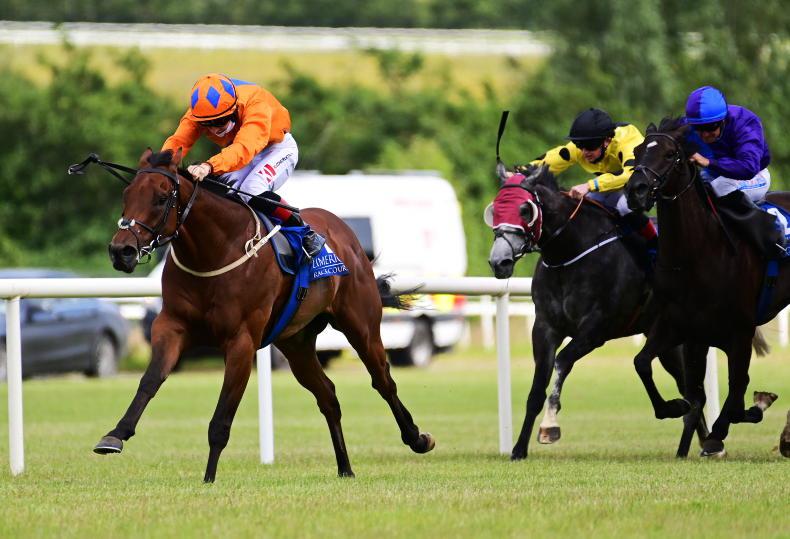 Gegenpressing has won over today's course and distance \ Healy Racing

Ooh La Belle can put the experience of her sole run to good use against a field of mostly debutantes. Willie McCreery’s filly showed promise to finish fifth at Listowel, running a little greenly, but eventually picking up well to finish fifth to Cash Or Crypto. The form may not be amazing, but she should know more about her job now, and that’s key.

Of the newcomers, All Things Nice catches the eye. She is a daughter of Sioux Nation, who has already had six first-time-out winners this year.

Next best: All Things Nice

It might be worth taking a chance on Gegenpressing, who is racing off a relatively attractive mark compared to his form last season. He ran well on his penultimate start, finishing third of 22 at Cork, and he had excuses when running at fifth at Listowel for his latest start, getting caught in behind horses at a crucial stage. His only win has come over this course and distance.

Cnodian is worth noting as well. She ran nicely on her comeback at Fairyhouse, and she should strip fitter now. She has a relatively unexposed profile so has the scope to improve.

Steps In The Sand was a big eyecatcher when finishing fourth behind Sally Golightly at Sligo and can go better with a more straightforward passage today. Sheila Lavery’s filly was badly hampered just as she tried to make a move in the straight, and then again to a lesser extent late on. The effort was a still a clear best and there should be more to come now.

Surac is of obvious interest as a very well-bred son of Frankel, who has moved to Richard O’Brien after three runs for Clive Cox. He ran okay on his stable debut, finishing sixth at Gowran, and the step up to this trip will likely suit now.

SELECTION: STEPS IN THE SAND

I Have A Voice was a taking winner at Leopardstown and he can go in again. Jim Bolger’s gelding made the running there and pulled away from his main rival, the well supported favourite Highland King, with another gap back to the remainder, so the form looks solid. That was just his sixth run, easily a career best, and despite a 10lb higher rating, he has the scope to surpass that in what could be a weaker heat.

Global Energy is interesting back over the course and distance of his maiden win but he may need it softer, so it may be Black Hawk Eagle who gives the selection most to do. He is similarly lightly raced and has finished second on his last two starts.

SELECTION: I HAVE A VOICE

Satono Chevalier is a tentative selection in this tricky contest. Formerly with Sir Michael Stoute, Richard O’Brien’s four-year-old has raced three times for his new yard this term, running with particular promise when fifth to Moracana over 10 furlongs at Leopardstown on his penultimate start. The drop back down to a mile, the distance he mostly raced over for Stoute, could help today and he has scope to improve, with just seven starts on the book.

Run The Jewels could have been given first preference, only for a poor draw in stall 19. He has won two of his four starts this season, and may be suited to racing around a bend again, after finishing seventh over th straight seven at Cork last time.

Next best: Run The Jewels

Riot has struggled to land a real blow in three starts this season but there is enough reason to be hopeful with him today. Johnny Murtagh’s gelding is now 8lbs lower than his career-best effort last September when he was fifth in the Sovereign Path Handicap at Leopardstown. That came over seven furlongs and he is trying a mile for the first time today, but that looks worth a go, and he also wears a tongue-tie, has rider Jamie Powell taking 7lbs off and is well drawn in stall four.

Jason The Militant is probably an unlikely runner if the ground stays as it is at the time of writing (good) while Alessandro Algardi is promising, but a mark of 91 is tight for this first start of the season. In this case Mazagran is worth the second vote. He was largely disappointing last season after a most impressive win over this course and distance. Back down the handicap, he may save his best for Limerick again.

The Vik is a tentative selection in a tricky finale. Andy Slattery’s three-year-old ran to decent standard on his sole start, finishing fifth to Luxembourg at Killarney last year. If he’s fit enough to run to a similar standard, he should go close.

Narlita has race fitness on side and she showed up quite well on her first start for new connections when fifth to Ezine at Naas. She tried to go with that winner that day, and probably just felt the effects of that effort in the closing stages, on what was her first run since her debut 174 days previously.