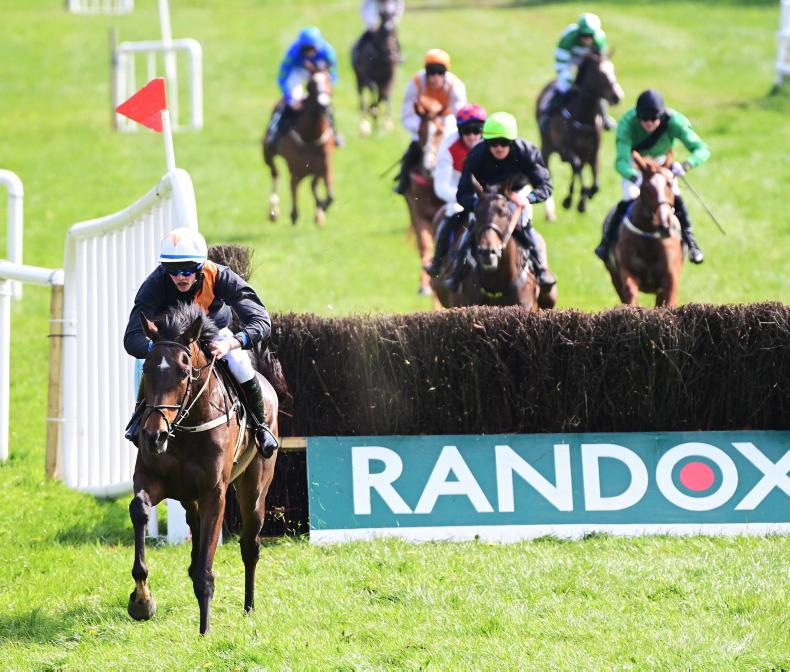 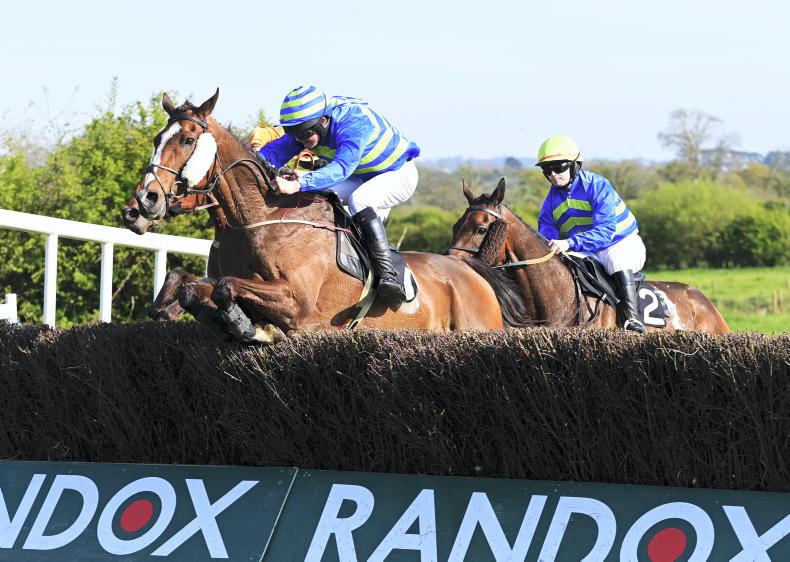 MARES took centre stage on day one of the two-day Largy meeting and it was the Paul Pierce-trained Seeyouinmydreams (2/1 – 4/1) who ran out an impressive winner of the opening four-year-old mares’ maiden.

The Blackhall Stables Partnership-owned daughter of Telescope was last at the halfway stage but rider Sean Staples slowly made his way through the field on the final circuit to score by an easy 15 lengths from the Colin Bowe-trained Sheeka Supreme.

“She’s a good mare,” said Andy Pierce, brother of the winning handler. “We fancied her a lot and she just wants the nice ground. We were just hoping that everything would go right because her work is very good. She’s a well-bred filly who has loads of gears. She’s probably not a three miler and more of a two miler.

“That’s why we sat her in and took our time. She was even better than I thought she would be. She’ll go to the sales now.”

Brian Lawless made the trip up to the Co Antrim venue for just the one ride but he made it a winning one in the concluding older mares’ maiden as Some Woman (6/4 – 1/1 favourite) ran out an impressive winner.

The daughter of Presenting, who was most recently seen finishing eighth in a point-to-point bumper at Cork, was always prominent under Lawless before taking up the running at the second last to win hard held by 12 lengths from the Tom Harney-ridden You No Me Too Well.

The winner is trained in Co Wexford by Donnchadh Doyle and Lawless said, of the Monbeg Syndicate-owned six-year-old: “She’s a very nice filly. We thought that she would do that first time out but it’s just after taking her a while to get to where she is. She’s very well-bred too, being out of a half-sister to Denman.”

The penultimate contest was an older geldings’ maiden race for novice riders and it saw a competitive field of 11 face the starter. Big Reggie (5/2 – 4/1) soon led under Alex Harvey and the pair weren’t for catching as they made most to score by 10 lengths from the Sean Doyle-trained Local Rogue.

The winner was having his fourth run between the flags here and was most recently seen finishing fourth at Taylorstown behind Knocky.

“He was just learning on the job and a bit green in his opening runs,” said winning handler Gerry Cosgrave of the gelding whom he also owns. “I don’t think he liked the ground the last day because he didn’t jump as well. He jumped much better today. He’s for sale but if he’s not sold, we’ll go for a winners race.”

Melody in tune to give Corrie a first victory

THERE were great scenes in the winners’ enclosure after the winner-of-one contest as Corrie Auchterlonie trained her first winner courtesy of the Brian Barry-ridden Boro Melody (8/1 – 7/1).

The son of Mahler was recording his second success between the flags having broken his maiden at Kinsale, under Eoin Shaw, in December 2020. He raced in rear throughout before Barry moved him closer at the halfway stage. They had to be game from the back of the last to fend off the challenge of the James Walsh-ridden Leading Force but they did just that to win by four lengths at the line.

Barry said, of the CAFRE (Enniskillen) Racing Club-owned nine-year-old: “He jumped and travelled brilliant. He’s getting older but he ran well the last day when I probably made a bit too much use of him. That’s why I held onto him a bit longer today. It worked out brilliantly. Credit must go to Corrie Auchterlonie for giving me the opportunity.

“Anna McGuinness, who is second jockey for her, broke her collarbone in Portrush when I picked up the spare ride on this lad. Corrie was kind enough to leave me on him since.”

The five-year-old mares’ maiden saw a small but select field of six go to post and it was recent Stradbally second Tara Line (3/1 – 7/2) who made all in the hands of Harley Dunne to score by six lengths from the Noel Kelly-trained Salacia’s Storm.

The winning daughter of Kayf Tara was having her fourth run between the flags and had slowly been getting better with each effort, culminating in this success for the Aidan Fitzgerald team. “She did that well,” said Fitzgerald of the Ashling Daly-owned mare.

“We were a bit disappointed with her earlier in the year but the horses were sick. She ran well at Stradbally last time out when she was beaten by a gelding so we thought that she would run well here.

“I told Harley that it would be his fault if she got beat! She’ll go to the sales now. She’s a lovely mare who will win plenty of races.”

Ten wins between the flags for Ask D’Man

THE featured open contest was confined to lady riders and it saw the hot favourite Ask D’Man (2/5 – 1/1 favourite) run out a five-length winner under Liz Lalor to claim his fifth success from 10 starts between the flags.

The David Christie-trained son of Ask went after Thomas Shelby at the fourth-last fence but that rival quickly weakened as the winner scored in cosy fashion from the Tom Dreaper-trained Sizing Rome.

Lalor said, of the John Hegarty-owned gelding: “I wasn’t too sure going along the back but as we got closer to the bottom bend, he was really travelling easily. I had a fair idea that I had them covered then. The further we went the better he went. He was flying up over the last. It was good to get him back in front!”

Local Rogue (S.T. Doyle): The son of Mahler was running off the back of a 502-day break here and he ran a fine race to finish second in the older geldings’ maiden. He can break his maiden tag next time out.