Title: KILLARNEY SUNDAY PREVIEW: Max Flamingo can get back to winning ways 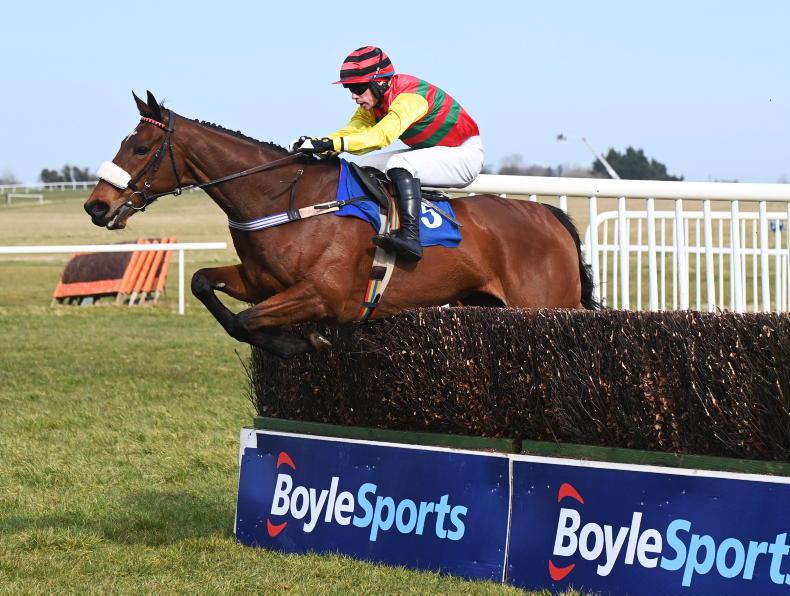 Rock Ya Boy Ya has shown enough in four runs over hurdles to suggest he can win this.

The Red Jazz gelding ran in some above average maidens over the winter months, so should appreciate the slightly calmer waters of this contest. His chance is obvious but Paddy O’Hanlon taking off an additional 5lbs strengthens his claims.

Wrecking Ball Paul made an encouraging racecourse debut at Navan before failing to justify favouritism at Down Royal. That latter run was too bad to be true, so the Elliott-trained horse has to be considered.

SELECTION: ROCK YA BOY YA

Roaring Potter has had two very good maiden runs either side of a disappointing effort at Leopardstown. With the vet reporting he was lame after that latter run; he had a valid excuse for the poor showing. His other runs came in strong maidens, the form of which has worked out exceptionally well in the interim.

Marvel De Cerisy is a very big threat despite the fact he may need further in time. The Tipperary point-to-point winner likes to make the running, so Rachael Blackmore is sure to make it a good test.

Santa Rossa looks the one to beat having acquitted herself well in Grade 2 company last time. Dermot McLoughlin has his horses in right order at the present time and this mare has always looked a smart prospect.

Injuries have kept her off the track for long periods but when at her peak she is a very useful mare.

Anna Bunina won the Scottish Champion Hurdle last month, before running slightly below par at Haydock last weekend. Provided the relatively quick turnaround isn’t an issue, then she is entitled to be very competitive.

Sit Down Lucy has already shown that she can be very competitive in races of this nature. The Peter Fahey-trained mare has been placed in two of the better handicap hurdles at the spring festivals. Charlie O’Dwyer continues to look great value for his 7lbs claim and that allowance makes the partnership an attractive proposition.

Glan was an impressive winner of her penultimate start at Fairyhouse but was pulled up after making a bad mistake last time. On previous form with Sit Down Lucy, the Gordon Elliott-trained mare has some work to do at these weights.

Max Flamingo can get back to winning ways having run a huge race in the Irish National last time. Francis Casey’s seven-year-old travelled well through that latter race but may just have found the trip stretching his stamina.

He should appreciate the lesser demands of this contest.

Egality Mans also showed up well on his first run outside of novice company at Punchestown. The Willie Mullins-trained gelding is more unexposed than these rivals and still has the potential to do better over fences.

Say Goodbye can be forgiven a below par run last time in a Grade 1 race at Punchestown. While she may not be quite up to that level, the Robcour-owned mare has some smart form over hurdles.

It has to be significant that connections saw fit to run her at the highest level as they aren’t known for tilting at windmills.

Mi Lighthouse also failed to complete in the aforementioned race, having finished second in Grade 3 class at Limerick on her previous outing. Willie Mullins has a strong team of mares to choose from so the fact he relies on the daughter of Arctic Cosmos should be noted.

Stealthy Tom catches the eye under Shane Fitzgerald’s 5lbs claim. An emphatic winner over two and a half miles at this track last October, the J.P. McManus-owned gelding received a hike in the handicap thereafter.

However, he showed that he was ready to win again when second at Punchestown last time and should have no issues dropping back in distance.

Pairc Na nGael is arguably the first string for McManus given the presence of Mark Walsh in the saddle. The Charles Byrnes-trained gelding won at Thurles last season and won’t lack for fitness coming from that yard.

Themanintheboots boasts a very strong pedigree in this sort of race with three siblings all winning their bumpers. A well-bred Milan gelding, he is with the right man to make a winning racecourse debut. It will be interesting to see how strong he is in the market on this first appearance under any rules.

Felix Summus would obviously have to be respected as the Willie Mullins representative in this finale. While he doesn’t have any winners in his immediate pedigree, he is sure to know his job and be well forward.