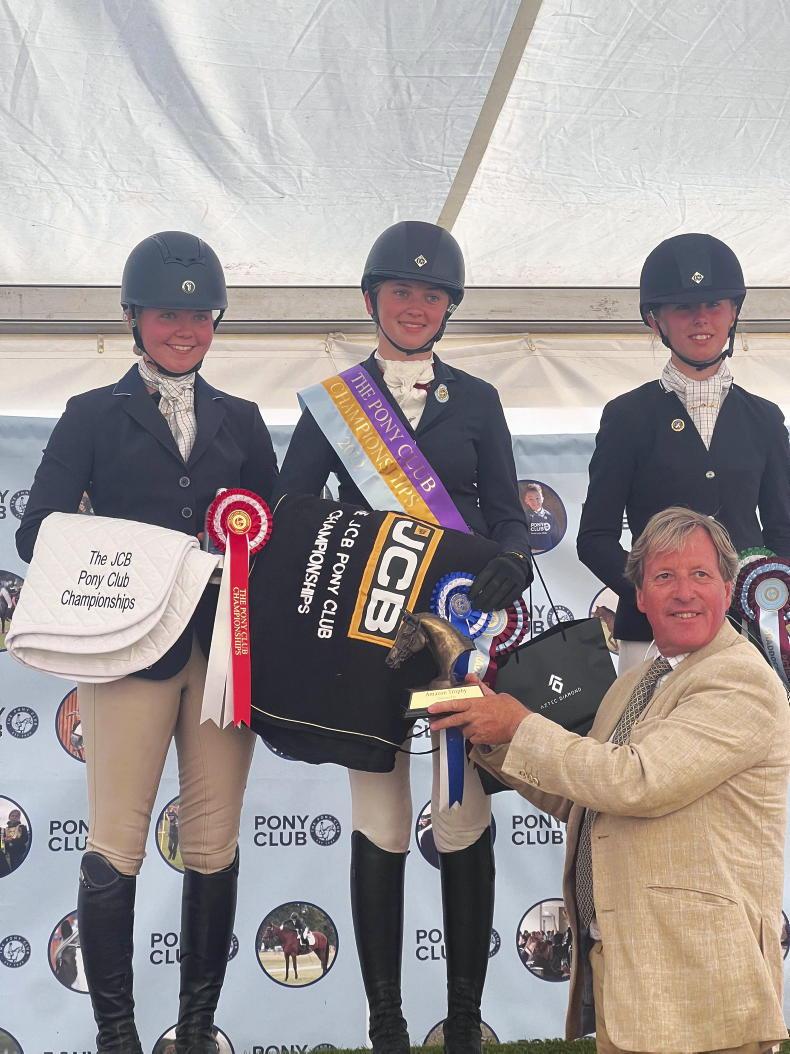 Charlotte Keers of the North Down Branch, who won a section of the PC100 eventing championships at Offchurch Bury last weekend, is presented with her prizes by Tim Vestey, chairman of The Pony Club

On board the Connemara pony Western Ocala in Section F of the PC100 eventing championships last weekend, Keers was one of only two riders from 20 starters to go double clear inside the time. The 19-year-old, who is about to start second year studying Law at Exeter University, completed on her third-placed dressage score of 29.2 penalties while those ahead of her following the flatwork phase both had problems in jumping.

Keers and the 10-year-old Cremully Western Melody gelding, who was bred in Co Galway by the late Michael Mitchell out of the Smokey Duncan mare Western Princess, have been competing with the North Downs and under Eventing Ireland rules since the start of 2017, a year in which they finished seventh in the EI90 (P) section of the Eventing Ireland National Championships. Since moving up a level, they have won two EI100 (P) classes. On the second of just two EI starts this year, they were sixth in an unrestricted EI100 at Tyrella (3).

In Section E, the Iveaghs’ Zoe Daniel finished sixth on board the 15-year-old Grange Bouncer gelding Anvil Lodge Pinnochio while, in Section D, Thomas Murphy was fifth for East Down with the ISH gelding Kylestone Carrick Prince, a 12-year-old bay by Carrick Diamond Lad. On 150.6 penalties, the East Down quartet of Murphy, Megan Carson, Rachel Fletcher and Rory Kinnear finished 11th of 22 in the team competition at this level.

Four of the 21 starters in the PC90 Open championship completed on their dressage scores including the Mid Antrims’ Hannah Thompson who finished third with the seven-year-old Zapatero VDL gelding OSH Atero (34.4).

There were disappointing results for the Area 17 teams in the PC90 championships where the best individual scores came from Mid Antrim’s Kirstin Thom, who was seventh in Section B aboard the 11-year-old Bobby Sparrow Blue gelding Rock Gem, and East Antrim’s Katelyn Irvine who was sixth in Section C on the Connemara mare Corha Delight, an 18-year-old daughter of Castleside J.J.

Moore and the 11-year-old Grade A mare were one of five combinations to go through to the jump-off round where they incurred four faults in 37.93 as Amy Thomlinson of the North Northumberland Hunt Branch recorded the only clear on the 2011 Harlequin du Carel gelding VIP Cooley.

In the PC100 championships, the Mid Antrims were one of two teams to progress to the jump-off round where, with poles being left on the ground by all three members of the squad – Christopher Smyth plus the aforementioned Kirstin Thom and Hannah Thompson – they picked up 16 faults in 128.82 as South Notts went clear in 131.01.

Joining forces with Suffolk Hunt member Sophie Stearn, the North Downs’ Ashleigh Saunderson and the Iveaghs’ Ella Heron won the Intermediate Senior polocrosse championship while, in Tetrathlon, the best individual results were recorded by the Williams siblings who are members of the Seskinore Branch. Patrick, who won his shooting phase, finished fifth in the Open boys’ championship while Sophia placed ninth in the girls’ equivalent.

In the horse and pony care championships, the East Antrim trio of Penny Logan and Flora Campbell, who are both 11 years of age, and seven-year-old Ruby Healy finished 10th of 29 teams at mini level.