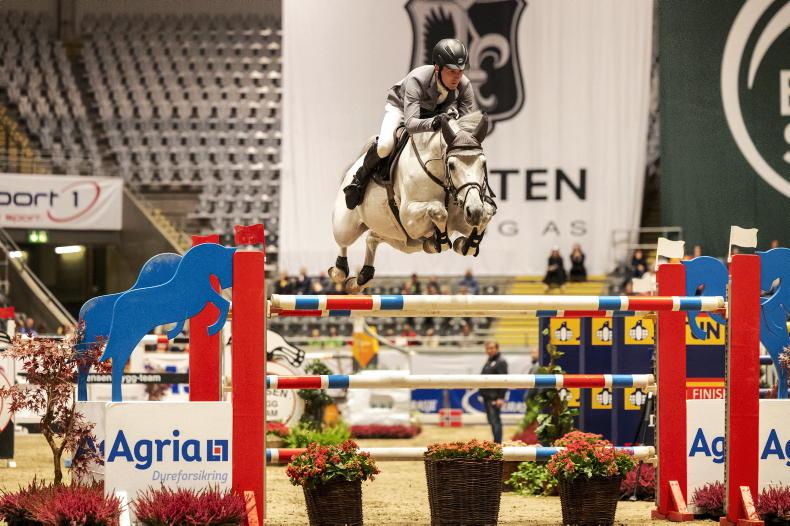 CO Clare’s Eoin McMahon made an excellent start to the 2022/2023 Longines FEI Jumping World Cup season, scoring a podium place finish in Sunday’s opening round of the series in Oslo, Norway.

Riding Ludger Beerbaum’s 12-year-old mare Chakra, McMahon was one of 11 combinations from a strong start list of 38 to make it into the jump-off after a clear first round. Drawn first to go in the jump-off, McMahon posted an impressive clear in 46.13 seconds against the clock, which would eventually be good enough for third place and almost €29,000 in prize money.

Victory went to Switzerland’s Bryan Balsiger and Dubai du Bois Pinchet with a clear in 41.38, while Norway’s Victoria Gulliksen and Equine America Papa Roach finished as runners-up in 43.62. Tipperary’s Thomas Ryan was among 13 riders to finish with one fence down in the first round riding the talented nine-year-old stallion Springfield.

Earlier in the day McMahon took fifth place in the 1.55m jump-off with the Beerbaum Stables-owned Con Corrado, when he finished as the fastest four faulter in the eight way jump-off. Taking victory was Jack Whitaker and Scenletha; they were fastest of the four double clears in 36.89.

Ryan and Springfield were clear in Friday’s 1.50m Table A to finished eighth, when Whitaker and Scenletha once again landed victory.