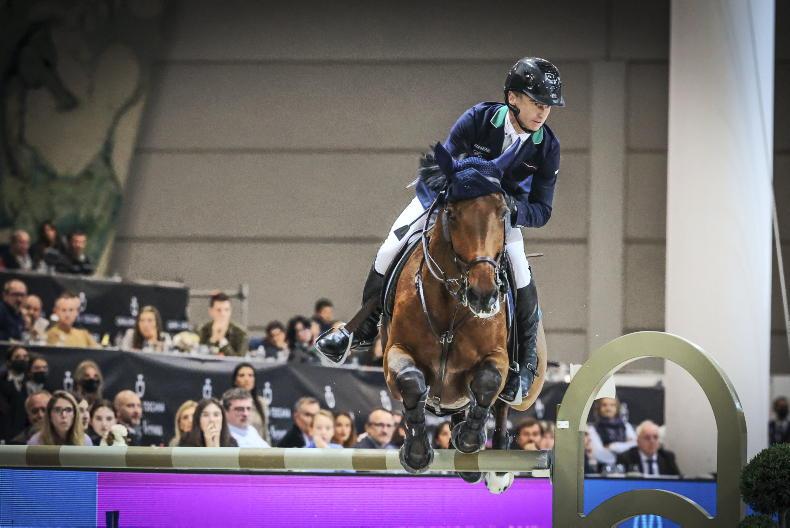 DENIS Lynch finished an excellent show in Verona when placing third in the third leg of the Longines FEI Jumping World Cup on Sunday at the Italian venue.

Victory in the feature class went to Frenchman Simon Delestre and the 16-year-old gelding Hermes Ryan after a thrilling and dramatic 12-horse jump-off.

From a starting field of 39, there were 13 qualified for the second-round jump-off, before The Netherlands’ Willem Greve withdrew Grandorado TN and just 12 battled it out against the clock in the race for those precious points towards qualification for the series final in Leipzig, Germany next April.

British veteran, John Whitaker, was first out in the jump-off with Unick du Francport who clipped the vertical second fence in an otherwise foot-perfect run to set the target at four faults in 40.47 seconds.

Germany’s Kendra Claricia Brinkop and her 11-year-old mare Kastelle Memo shaved almost three seconds off that with a fearless clear run that stopped the clock in 37.80 when next to go. And that would prove tough to beat.

Sweden’s Jens Fredricson and Markan Cosmopolit then cruised home in 40.73 which, slowest of the clears, was eventually good enough for fifth place. Next in, Britain’s Emily Moffitt was eliminated when parting company with Winning Good, before Finland’s Noora Forsten had a frustrating run-out in an otherwise great round to come home with six faults.

It also went all wrong for Colombia Carlos Lopez and Admara. The 56-year-old Colombian and the ultra-experienced 16-year-old gelding who carried him to individual fifth place at the FEI World Equestrian Games in 2018 looked set to take a stride out to that vertical second fence but, missing their distance, they came tumbling down on the landing side. While Admara picked himself up and cantered away, Lopez received medical attention before being taken to Verona’s Borgo Trento Hospital with a suspected shoulder injury.

Down to the wire

When the action resumed, Germany’s Christian Kukuk brought his grey gelding, Checker, through the finish with a clear round in 39.08 to slot temporarily into runner-up spot. That didn’t change when America’s Jessica Springsteen and the horse that carried her to Olympic team silver in Tokyo this summer, the fabulous Don Juan van de Donkhoeve, put in what would be the quickest time when racing through the finish in 36.83 seconds only to leave the very last fence on the floor.

Then both Italy’s Lorenzo de Luca with F One USA and Belgium’s Niels Bruynseels and the fiery mare Frenchy VDS left one on the ground before Delestre set off with the flying fast Hermes Ryan. They raced through the timers in 37.32 seconds to go into the lead, with just one left to go – Ireland’s Denis Lynch.

Lynch guided GC Chopin’s Bushi to a foot-perfect round in 38.62 seconds, just off the winning pace, to slot into third and earn valuable points towards the final.

“I have been so lucky to have him with me for all these years, and I will not have another horse like him again!” a delighted Delestre said afterwards.

“Ryan has won or was on the podium of most of the big Grand Prix competitions around the world and it feels so good to win here again six years after the last time, and to have him in such good shape.

“The jump-off was good for him, all the distances were perfect – where all the other horses had to slow down I could just go, and this was a big advantage today,” he explained.

McAuley came close once again in Saturday’s big 1.55m jump-off class. Riding the brilliant 17-year-old grey gelding Miebello who has been a trusty partner for a number of years, he was one of six clears in the jump-off in a time of 34.39, just fractions of a second slower than Belgium’s Wilm Vermeir with Iq van het Steentje (34.01). McAuley earned €19,000 for second place.