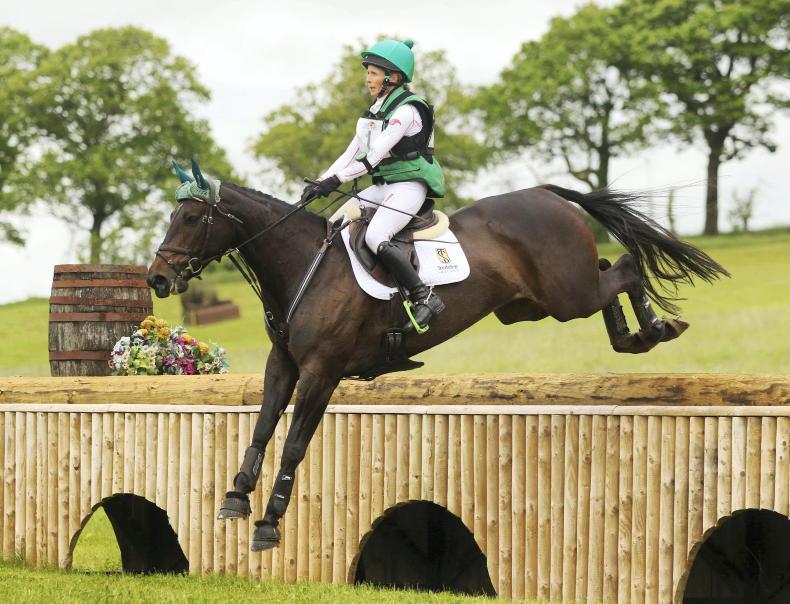 March led from the front on a record setting dressage score of 21.3 for the class, and show jumped clear before taking her foot off the speed pedal across the country and finishing with 2.8 time penalties to complete on 24.1, 4.1 penalties ahead of runner-up Sarah Bullimore with Evita AP (28.2).

Highest placed of a number of Irish-breds was Greenacres Special Cavalier in third with New Zealand’s Caroline Powell. Bred by Michael Callery, the nine-year-old is by Cavalier Royale out of the Touchdown mare Greenacres Touch, and has plenty of four-star experience as well as two trips to world breeding championships in Le Lion d’Angers. They finished on their dressage score of 28.8.

Sarah Ennis was hugely impressive in the jumping phases to climb from 32nd after dressage (32.9) to finish on that score in sixth place after being clear and inside the time with the Andrew Cox-owned Action Lady M who, by Plot Blue out of an Acorado mare, was bred by Susanne Macken. The mare is already a winner of two EI 120 classes this season and has plenty of SJI events under her belt.

Ennis would have been keeping a close eye on the seventh-placed Sligo Candy Cane (Sligo Candy Boy x Aldatus Z) as she produced the flashy chesnut until he was seven before being sold to Australia’s Bill Levett, who indicated at Blenheim that the nine-year-old is being aimed at the Paris 2024 Olympic Games.

Elizabeth Power was the best of seven Irish in the CCI4*-L at the venue when finishing 12th with Therese Miller’s Senza Fine. The pair added two cross-country time penalties and four show jumping penalties to their dressage score to complete on 38.0.

The class was won by German semi-professional Malin Hansen-Hotopp who was making her first visit to British soil. She lead from the first phase with Carlitos Quidditch K and finished on 25.8 with a fence to spare over her compatriot Dirk Schrade with Casino 80.