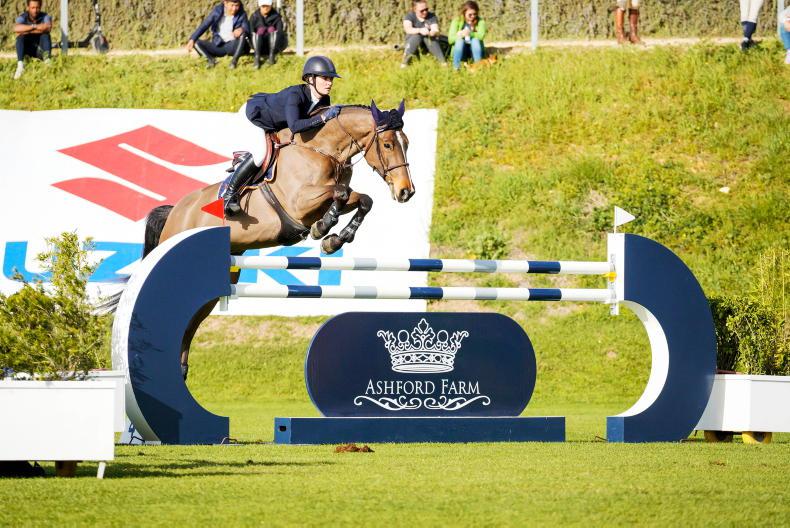 GALWAY’s Jessica Burke was on a winning roll at the Sunshine Tour in Vejer de la Frontera, Spain, last week. The England-based rider opened her account with an impressive victory in the seven-year-old final with Arion Stud’s Billy Utah.

Some 69 combinations started in the hugely competitive 1.40m class, with 18 making it through to the jump-off. Of those, 11 were double clear and Burke’s time of 37.76 seconds was good enough to take victory and a prize fund of €2,500, ahead of Belgium’s Gilly Thomas with Puskas de Kalvarie. Harry Allen finished in fourth place with Corazon Z.

By Cevin Z, Billy Utah was bred by Donal Barnwell at the Billy Stud. Speaking afterwards, Burke said: “I am absolutely delighted. She has jumped clear every single day, that was her seventh clear round. We bought her from the Billy Stud at the back end of her five-year-old year. She went to Lanaken last year and had a really good show there.

“I was confident coming down here because she has always been consistent but she has never jumped a course that big and to go that fast; when I saw Kendra [Claricia Brinkop] go first, I didn’t think it was possible to catch her but I just gave it everything and I am delighted with my horse.”

Burke then won two four-star classes at the venue with the nine-year-old mare Inpulss who just joined her string at the beginning of the season. They won Saturday’s 1.40m Table A with the fastest clear in 65.98 from a class of 99 starters, before going on to land Sunday’s 1.40m against the clock with another quick clear rounds.

The Irish results continued to flow on Saturday as Sean Monaghan and Daisy Duggan’s Irish Sport Horse mare EMS Adelaide (Mermus R x Loch Cruise) claimed victory in the four-star 1.45m. They galloped home with nothing to add in 31.48 seconds and were following closely by Mayo’s Ciaran Nallon and Mc Flurry, who also answered all the questions in a time of 31.56 for second place.

Nallon, who rides for Hanley, was also runner-up in Friday’s 1.40m Table A, again aboard Mc Flurry. He was just over two seconds slower than the winner, Germany’s Helmut Schonsteter (Toulanda Degli Assi), when he clocked 62.35.

Co Down’s Dermott Lennon added to the Irish haul on Friday as he took the runner-up spot in the 1.45m two-phase. Riding Eamonn Bishop’s Irish-bred L’Esprit Hero Z (Lexicon x For Pleasure), who was bred by Gerry Marron and Luc Henry, he was less than a second behind French winner Pierre Alain Mortier.

Eoin Gallagher was best of the Irish in Thursday’s four-star Medium 1.40m Tour, finishing in second place aboard I Love you M, when clear in 60.43. Lennon took seventh place in this line-up with the Harry Marshall-bred eight-year-old Irish Sport Horse Millview Cicero (Cicero Z van Paemel x Oklund) when they crossed the line clear in 65.26.

Later in the day, Gallagher secured a fourth place finish with Caliber Royale in the 1.35m Big Tour when he answered all the questions in a time of 61.31. Lennon finished further down the line in seventh place aboard Anthem In My Heart, clear in a time of 65.60.

Also in the ribbons on Thursday was Jeremy Sweetnam as he took third place in the CSIYH1* seven-year-old class. Riding Chuflay, he kept all the poles in place in a time of 69.06.

Mayo’s Cameron Hanley finished off the week in style when taking third place in the Equine America 1.55m Equine America four-star Grand Prix. A total of 50 combinations lined out to contest the class and from those just five proceeded to the time round. In what was a very competitive jump-off just three delivered double clears. Hanley was two seconds off the winner when he answered all the questions in a time of 40.21.

Winner of the class was Brazil’s Pedro Ceniss and Nimrod de Muze Z who clocked 38.91.

On the same day in the Milton arena, Carlow’s Jason Foley claimed fourth place in the four-star 1.50m Medium Tour Grand Prix. Riding Keatingstown Z Wellie Two he was one of seven double clears in a time of 38.32.

Alex Finney was also in the ribbons, claiming third place with Duco in the 1.30m Medium Tour when she answered all the questions in a time of 26.60. Lauren Devine was back in the line-up on Sunday, claiming the runner-up place with Vega O’ Mourlin in the 1.35, clear in 31.30.