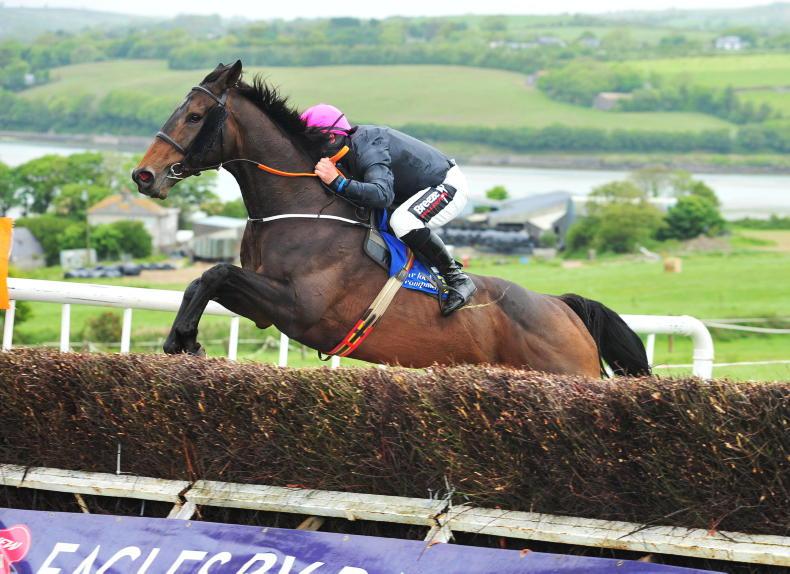 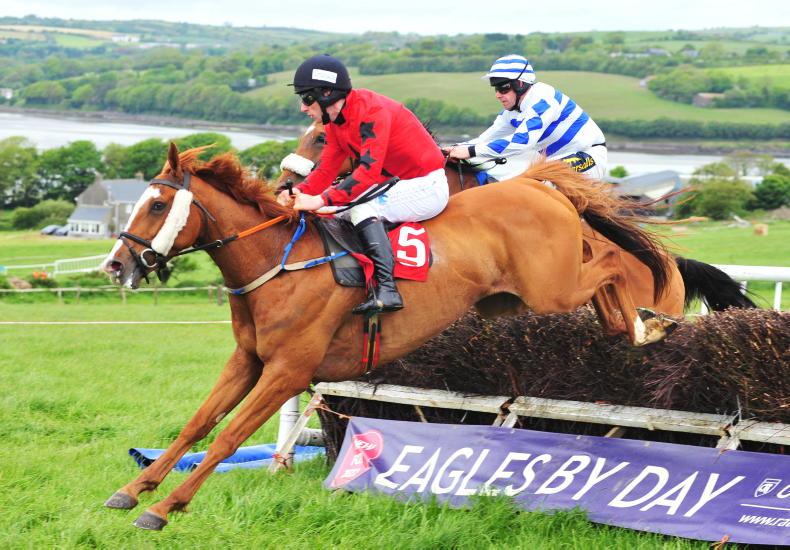 THERE was some competitive fare at Sunday’s Clonakilty meeting, run under the auspices of the Carbery Foxhounds on Inchydoney Island, and Colin Bowe justified the lengthy trek from his Kiltealy base by saddling a hat-trick.

All three of Bowe’s winners sported the increasingly-familiar Milestone Bloodstock Ltd silks and the champion handler opened his account courtesy of the Barry O’Neill-ridden Alden (7/4 - 2/1 favourite) in the four-year-old maiden.

Coconut Twist set out with the intention of making all and Cormac Doyle’s charge still held a fractional advantage over Littlefoot and Alden at the third last of the 15 obstacles.

The Walk In The Park-sired winner, who ran more than creditably despite pulling up on his debut in a competitive 12-runner Broughshane contest earlier this month, took over between the final two fences and he secured a faster leap than the pursuing Littlefoot at the last which partly enabled him to beat Maike Magnussen’s charge by a length.

“He had a nice run in Broughshane, but he ran into traffic problems as he got a bit crowded after making a mistake three out,” confessed Bowe of Alden, a maternal grandson of the Grade 2 winning juvenile hurdler Lounaos. Alden was acquired for €52,000 at last year’s Goffs Land Rover Sale.

“Barry said that he would win the next day and we fancied him today.”

Bowe and O’Neill later combined to collect the five-year-old and upwards mares’ maiden with Bents Hollow (2/1 - 3/1), whose dam is an own-sister to Gordon Elliot’s mare Glan who won a €100,000 handicap hurdle at theFairyhouse Easter Festival.

Bents Hollow, a respectable fifth on her debut behind Thermusa at Dawstown on May 2nd, arrived from mid-division to lead three out. The winning daughter of Soldier Of Fortune was clearly in command approaching the final fence and she duly defeated Conor’s Gift by five lengths.

“She ran well in Dawstown and she’s a lovely mare with a professional attitude that will now go to a sale,” said Bowe of Bents Hollow, who hails from the immediate family as Grade 1 winning hurdler/chaser Foreman.

D’last Spez (3/1 - 5/1), who pulled-up on his two previous starts at Ballyvodock and Loughanmore this year, provided Bowe with his third winner by springing a mild surprise under Rob James in the five-year-old geldings’ maiden.

D’last Spez, who was fitted with cheekpieces, was bounced out smartly in front and he led until joined by favourite Lucky Zebo before three out. However, the winning son of Cokoriko was clearly travelling best when throwing a superb leap two out and he stormed clear before the last to contain Lucky Zebo by 10 lengths.

Bowe remarked of D’last Spez, who traces back to Grey Shot: “We always knew that he had ability, but he was green in his head and just needed a few runs.”

DAVID Christie was rewarded for the five-four trek from his Derrylin base in Co Fermanagh as he saddled this season’s champion horse elect Some Man (1/3 - 4/11 favourite) to record a seventh success of the campaign in the open, much to the dismay of the eight bookmakers present.

Some Man, also a winner at Ballindenisk the previous Sunday, was held up in second spot by Rob James as Some Are Lucky tried to make all under his owner Gerry Spain.

While having to be pushed along from five out, the 11-year-old Some Are Lucky still held the call when the closing Some Man blundered three out.

There was little between the pair after the second last and dramatically, they collided into each other at the final fence. Some Are Lucky stuck determinedly to his task on the run-in but he couldn’t quite cope with the triumphant son of Beat Hollow inside the final 50 yards as the Ray Nicholas-owned bay marginally got on top to score by a half-length in what was the closest finish of the afternoon.

“Some Man has run four weeks in a row and he just did enough to get the job done,” said Christie, who previously won this race with Maple Mons in 2016.

While being interviewed by paddock commentator Pat Griffin post-race, Christie revealed that he will be represented by both Vaucelet and Ask D Man at last night’s Stratford big hunter chase meeting.

ALEX Ott trains just a handful of horses at his Boherbue base and he seems to have a useful recruit in the form of Inchidaly Copper (2/1– 1/1 favourite) as the ex-hurdler supplemented his recent Dawstown maiden victory by recording a bloodless success with rider Chris O’Donovan in the winner-of-one.

Inchidaly Copper, equipped with cheekpieces, disputed the running with Miss Mae West until edging ahead from six out. The Owen O’Flynn-owned son of Doyen was clearly travelling best from three out and he swept clear before the last to beat Peggy Gordon by eight lengths with the pair returning a distance clear of the third-placed Miss Mae West.

“He ran a great race and hopefully he will be ready to go again,” said Andy Burke Ott, son of the handler. “The only race left for him is a winners’ race at Dromahane next Saturday.”

Twenty-one-year-old Kieva Hynes, an Adamstown native that works with Paul Nolan, partnered her very first winner aboard Sean Doyle’s Local Rogue (2/1 - 3/1 joint-favourite) in the six-year-old and upwards geldings’ maiden which was the race that attracted the biggest field of the afternoon in 11 runners.

The Edward Power-owned Local Rogue, who finished in the frame on seven previous occasions, vindicated the promise of his second-placed return effort behind Big Reggie at Largy last month by getting on top from the last to dismiss the staying-on Useitorlooseit by a length in a race that saw a little under three lengths cover the first four home.

Littlefoot (M. Magnussen): This son of Milan, having finished third on his debut at Stowlin, still held every chance when erring at the last in the four-year-old maiden.

Beaten a length into second, he should win his maiden en-route to making his mark over hurdles. 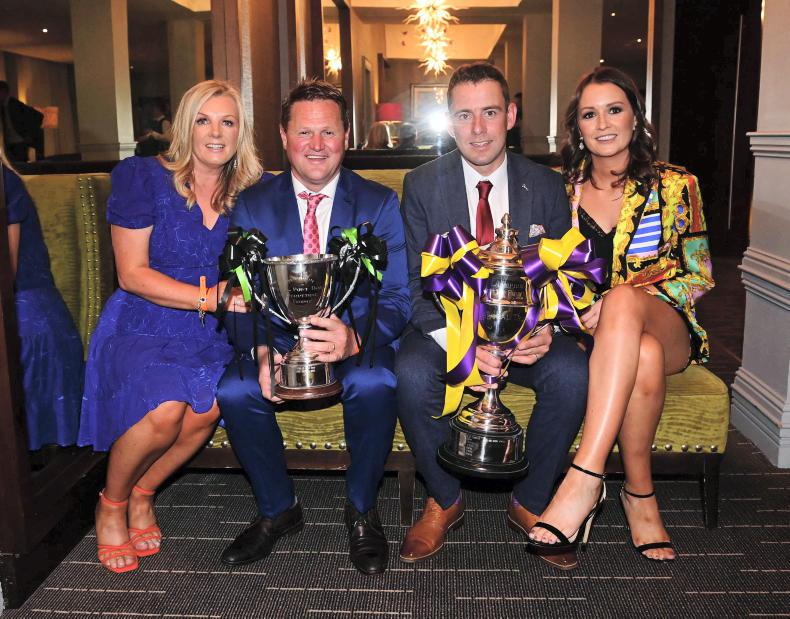 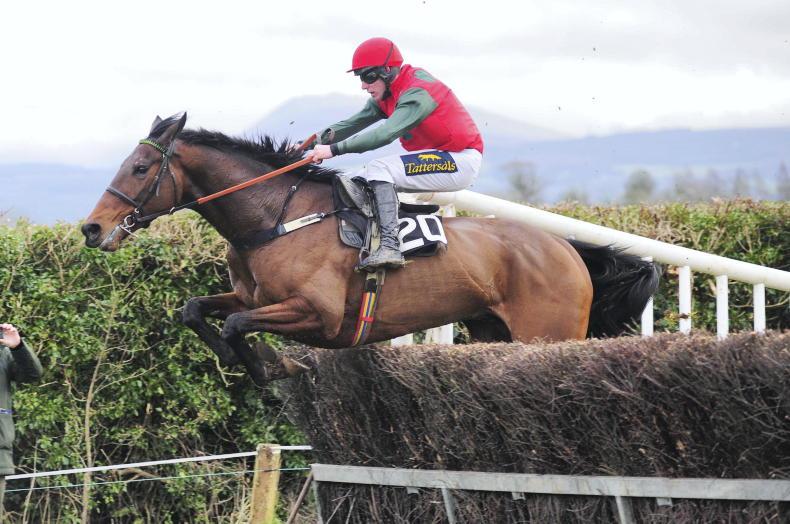 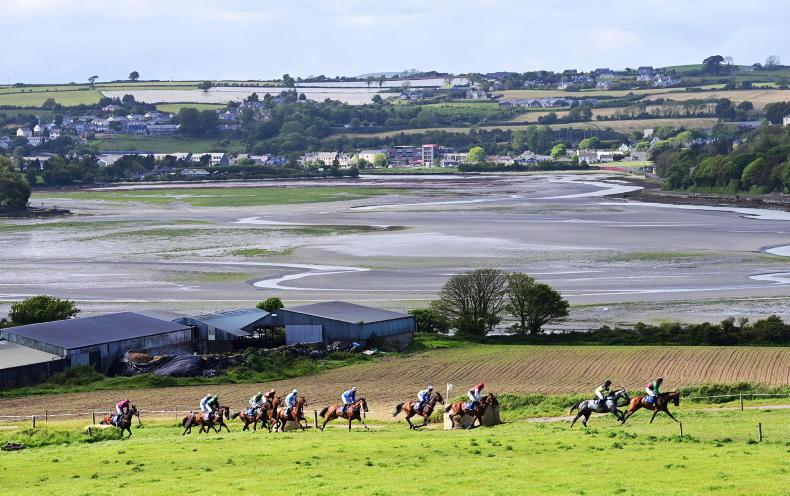 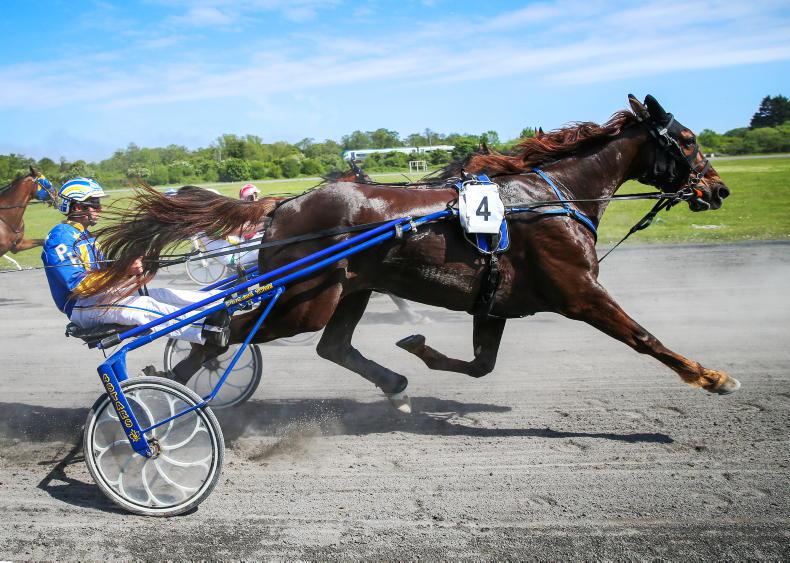 Dan Carlin
HARNESS RACING: Roche double the Star Attraction
Roche won the E and F trot with Buliano and the A to D pace with Star Attraction, which Inchydoney hosted a well attended beach meeting