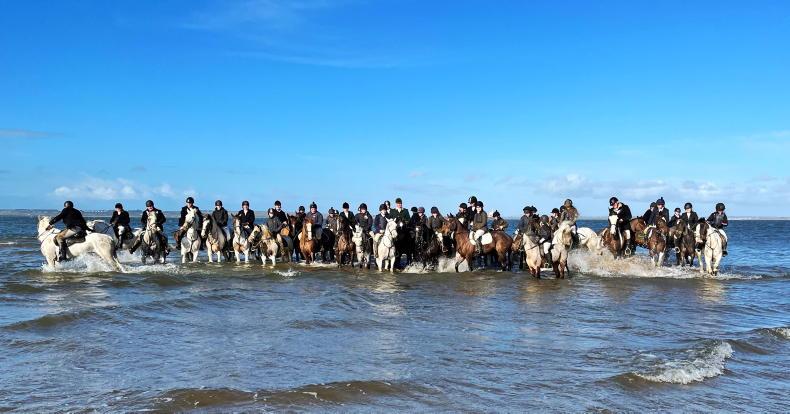 WITH this most unusual of all seasons, winding down at Asdee in North Kerry was our Sunday venue. For those not familiar with the geography of that marvellous part of the country, the village of Asdee is roughly halfway between Tarbert and Ballybunion, that seaside resort much favoured by Limerick farmers once the harvest is gathered.

David Trant has been hunting these hounds almost from their inception and kennels them at home on his extensive dairy farm outside Listowel. We were greeted by many familiar faces as we arrived, including Shannon O’Mahony who works a psychiatric nurse. Also, Seanie Sheehy from nearby Ballybunion, the veteran of the field at 75 but still called on to give a lead when things get sticky. Seanie is a former master of the County Limerick Hunt.

Chairman and master, one of the leading lights in the hunt is Michael O’Sullivan, who was out on his heavyweight hunter. His son Denis hunts the Ormond Foxhounds in North Tipperary. Michael is a lecturer in mechanical engineering and received his engraved hunt buttons at the most recent hunt ball in recognition of being 22 years master of the hunt.

On foot but there to enjoy the day was Maurice Stack, and among the very good horses he has bred is Captain Cee Bee who raced with distinction in the colours of JP McManus. Talented local photographer Elizabeth Brosnan was on hand to capture images for the hunt’s Facebook page.

Perhaps Asdee’s greatest claim to fame is that it is the birthplace of Jesse James’s father, but sadly neither he nor his trigger-happy son could make it on Sunday to Jack J’s public house.

As we arrived, Jack J’s was doing a roaring trade putting our hosts Marie and Tom Lynch under pressure with the pub bursting with locals after Mass and a good number dressed in breeches, boots and the other paraphernalia of hunting.

It was going to be their final meet for the season and almost 50 riders, on every kind of horse you could imagine, had gathered to make the most of the final day.

David was hunting a mixed pack of nine and a half couple ranging from Old English, Irish Harriers and some of the woolliest Welsh hounds I have ever seen, bred by the Stonehall Harriers.

But shortly after the Angelus from the nearby church struck midday, it was time to get that final leg up, tighten the girths, and prepare for a day crossing the North Kerry countryside. David has just recovered from a broken leg and I’m sure if this was racing, he would not have passed the medical, but undaunted, he stuck the good leg in the iron and was away.

His wingmen were his two young daughters, Eabha (14) and her younger sister Molly, who has yet to graduate from Dromclough National School. The two girls, a credit to their parents, were beautifully turned out and were acting as first and second whipper-in on the day, surely the youngest members of hunt staff anywhere in the country. David runs a very substantial dairy herd on his farm near Listowel where he also kennels the hounds.

Keeping order was field-master Jeremiah O’Connor who runs an equestrian centre at Derra Farm just down the road from Asdee. Hounds moved off to the first draw right behind the pub in an area known as the Hanlon’s Glen. They then pressed on across the Ballybunion Road to O’Keeffe’s farm where they found and a nice dash ensued over the typical banks and drains of North Kerry.

They marked their fox to ground and pressed on to Jeremiah O’Connor’s farm and equestrian centre which has more schooling fences than there are sparrows on an oak tree.

However before any serious jumping could take place, a team of helpers emerged from his house laden down with refreshments of every kind. It would have been considered bad manners to rush but eventually sausages, cakes and biscuits and something to wash them down were consumed and serious jumping started.

Hunt Secretary Shannon O’Mahony had generously surrendered her good coloured to Jeremiah for the occasion while she was riding a four-year-old she was bringing on. Shannon had started her equestrian career working with elite show jumpers for Lady Georgina Forbes who bred the multiple international Grand Prix winner Castle Forbes Libertina among many good sport horses.

Derra Farm is in the final for the equestrian business awards in Ireland and judging by what I saw, it should do well. At both sides of the main road, there were schooling fences as far as the eye could see ranging from up banks to hedges, uprights, and best of all a couple of point-to-point type fences which were a bit more jumpable than what might be found at a regular meeting.

The field, young and seasoned, had a field day belting on over the course with only an occasional fall. While the field were enjoying the jolly, hounds had moved on to draw Jeremiah’s plantation nearby. They weren’t there too long when one of the really hairy hounds of Stonehall provenance (Handsome is as handsome does!) spoke with all the depth and character that has made these hounds famous in the hills and valleys of Snowdonia and they had a fox afoot just as the field caught up after their exertions.

Hounds hunted on towards Beal Strand over some smashing country with loads of banks and an occasional hedge. Hunting is a marvellous sport because it can be enjoyed by all the generations. On the day we had the septuagenarian Mike Mangan out with his seven-year-old grandson Ryan and both were crossing the country like veterans. Ryan’s dad, Jerry, the well known point-to-point handler from Knocnagoshel, was not riding but holding a watching brief. Kevin Quilter from Listowel was out with his daughter Julia on her 12hh pony and older brother Josh and all going well on the day.

Hounds hunted well for over 40 minutes before Renard went to ground where he was left until next season. With the majestic Shannon estuary in view, our huntsman and field went for a bracing canter on the Beal Strand before washing off in the mighty Shannon waters. However, preparations were well in hand at Jack J’s and song and story went on well into the night.

Founded as recently as 2002, the North Kerry Harriers hunt the greater part of North Kerry while making the occasional foray into neighbouring west Limerick. 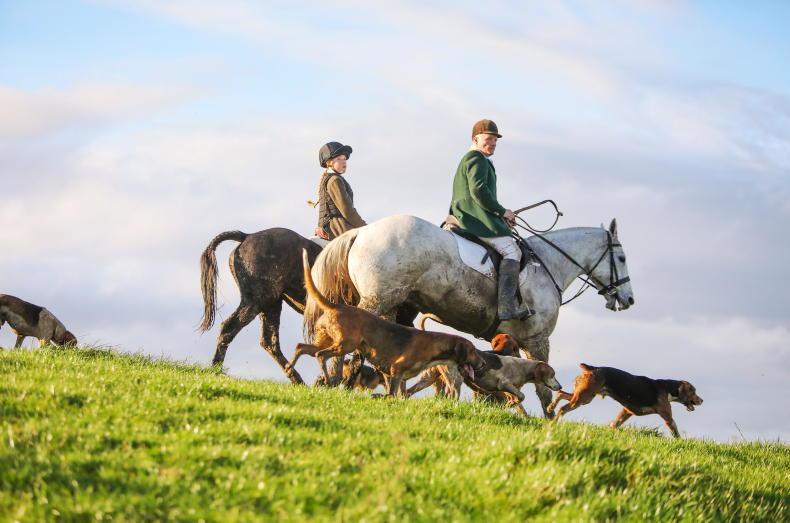 Irish Field Contributor
PONY TALES: Learning the ropes
Eabha Trant (14) is enjoying her first season as whipper-in to the North Kerry Harriers where her father David is huntsman 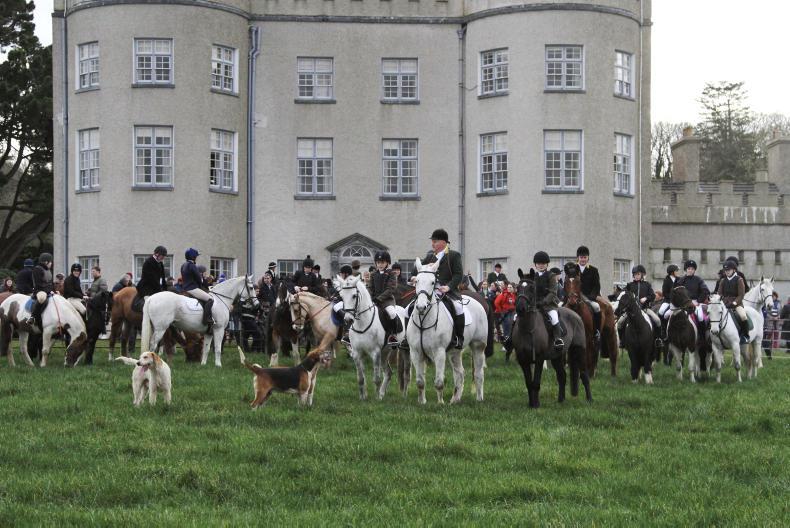 HUNTING: Knights and feats of valour
Dickie and Catherine Power spend a festive day with the North Kerry Harriers at their meet at Glin Castle, Co Limerick 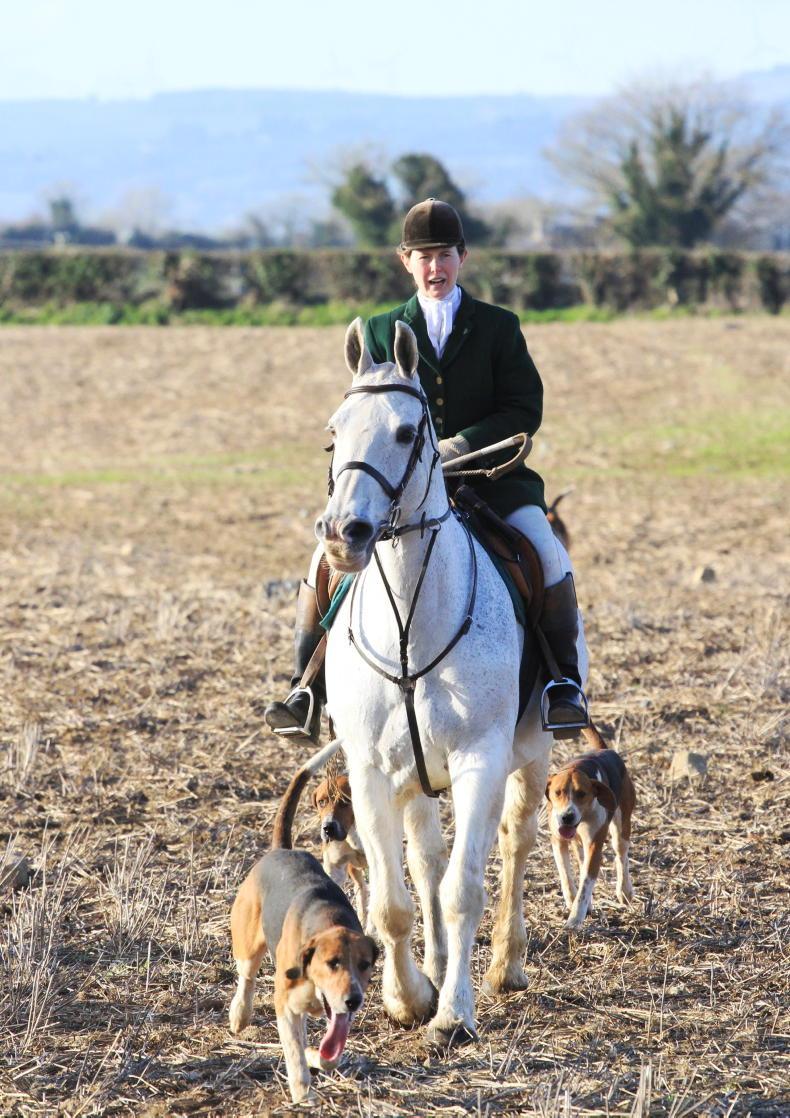 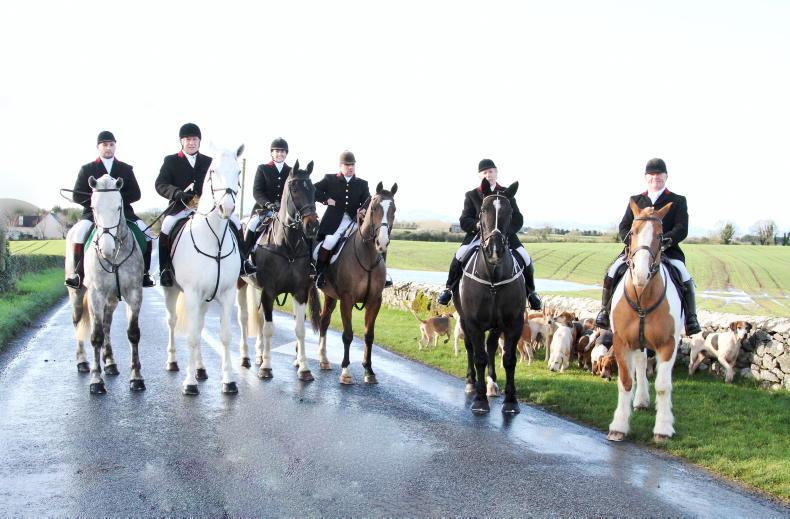