Title: HUNTING: Iveaghs well up to the challenge 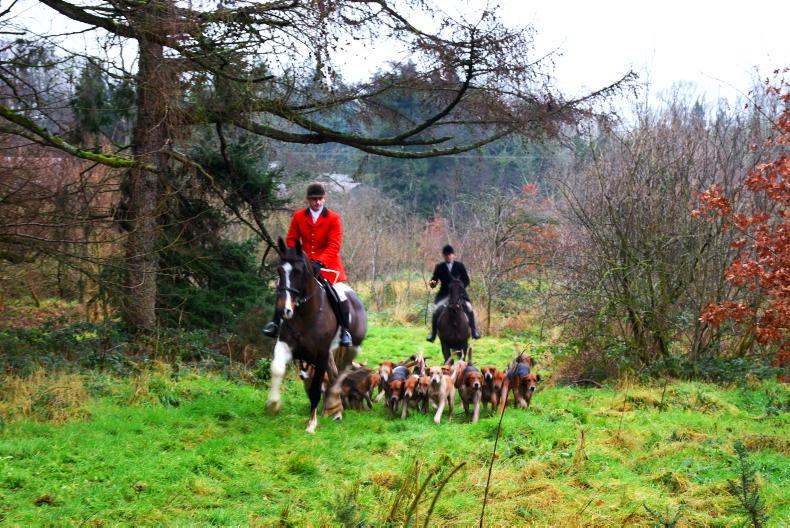 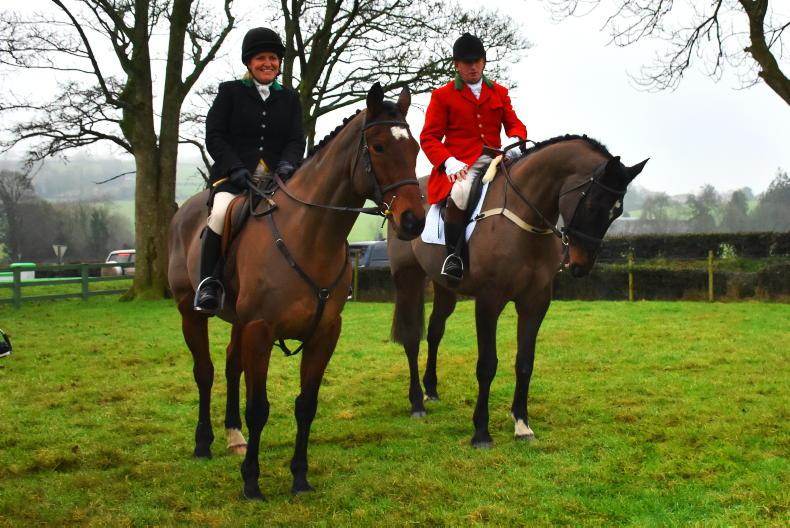 THIS week I was with the Iveagh Foxhounds in Bronte homeland in Co Down. It is the birthplace of Patrick Bronte, the father of talented daughters Charlotte who wrote Jane Eyre, Emily, Wuthering Heights and Anne, The Tenant of Wildfall Hall.

It is also close to the gallery and studio of the surrealist sculpture FE McWilliams which is well worth a visit.

The meet was at The Gall Bog Bar, owned by Brian McCusker, which got its name from the adjacent bog. It is well-known for its music nights and for its charity tractor runs. It is beautiful hunting country, with stout hedges and drains, and is ideal viewing country with its rolling hills.

Joint-master Alexander Mills, now in his 40th season hunting, has also evented in many parts of Ireland. Fellow joint-master and racehorse trainer Sarah Dawson, whose racing stables are close to the meet, was a former event and point-to-point rider.

Her racing stables are near Dundalk, Downpatrick and Down Royal Racecourses, and she promotes racehorse syndicates with on-going new acquisitions which allows the average person to get into racehorse ownership. Her husband Joe was busy taking photos but I saw him rushing back to his car for a spare battery!

Their new huntsman, Declan Mulcaire, has settled in and is getting to know the country, but he has already put the nucleus of a nice working pack together. He grew up in Co Limerick where his father and grandfather were associated with the County Limerick Hunt.

He started his hunting career on foot with the Dromore Harriers. He also rode in point-to-points before going on to be the whipper-in to Peter Cahill in the Kildare Foxhounds and also to James Lowry in the Westmeath Foxhounds. More recently, he hunted the Farney Harriers, as well as a spell with the Blue Ridge Hounds in Virginia, USA.

His mixed pack are mainly Old English and Modern hounds with bloodlines from Limerick, Duhallow, Kildare, Glamorgan and Louth Foxhounds, but he would like to breed some of the Westmeath Foxhounds old Whiteface line.

JD Devlin was also on whipping-in duties as Jordan Parr, a son of Tommy who is whipper-in to his brother Lloyd in the Louths, was temporarily on the injured list. JD runs JD Transport which he says gives him a very active life, driving by night and hunting by day!

Honorary secretary Faith Cromie was busy before the hunt with the administration and collecting cap, as her father George, sister Heather and her son George Jnr were following. Pat Hayes, joint-master of the Duhallow Foxhounds whom I last met hunting with the Genesee Valley Hounds in Upstate New York, was visiting his friends in the Iveagh. He was riding a smashing chesnut hunter belonging to George Cromie who bought him at Cavan Sales as a six-month-old foal. George said that he let his bones develop, keeping him well-nourished, and broke him as a four-year-old. He is the most striking hunter and I think he knows it.

First to arrive was Robbie McCracken who owns Churchview Boarding Kennels just down the road, also well-known for breeding working labradors. Others hunting were Dave Raunch while Bee Smith was riding one of Sarah Dawson’s former racehorses, Monsieur Bagot.

Getting mounted early also were Gareth and Leanne Black, a cousin of Ruth Morrison who is the manager of hospitality at Downpatrick Racecourse. I remember taking a photo of Ruth as a teenager jumping an enormous hedge on a pony near Ronnie Duke’s farm in the Iveagh country.

Hunting also were Peter Savage, Helen Stinton, Adam Bogue, and John Jordan who was on an active cob belonging to Brian McClory. Hunt treasurer Fiona Wilson was on a smashing hunter she found hunting with the Kilworth and Araglen. Following by road were Mark McAuley, John Savage, Tom Fulton and Eric McClelland, former master of the Co Down Staghounds.

I felt sorry for Charlie McPoland who I last met at a meet in Shrule, Co Mayo when hunting with the North Galway Foxhounds. He had a fall recently and injured his ribs. The hospital recommended he attend a Fall Prevention Clinic, but I think the medics overlooked the fact on his hospital chart that there was a horse and hunting in the equation!

Huntsman Declan Mulcaire has had some good hunting days so far this season. Hounds had a nice run of one and a half hours from the Willow plantation in Donacloney to Blackshill and back towards Dromore. Another good hunt was from Liz and Conor McDonnell’s, finding in Leapoge’s the fox ran over Trevor Martin’s and had to be stopped near the dual carriageway.

I was intrigued with the technical knowledge of Janine Porter, who normally hunts with the County Down Staghounds. She had a tracking application on her phone, ‘Share your Location’ through WhatsApp fixed on her brother Gary who also whips in to the Staghounds and hunted them the previous day while huntsman Lee Peters was off sick. It meant we could see where the hunt was at any given time. Gary is also into technology, farming the modern way as he uses a drone to check his flock of sheep if he is in a hurry to go hunting or watch a football match on TV using the drone screen!

With scent so poor, it was always going to be a challenge to hold a line, but the huntsman and his hounds persevered. The first draw was around Kilmacrew House where hounds found and hunted around the woods and in the thick scrub. But this customer was difficult to dislodge so after some nice woodland hunting and great hound music, the huntsman decided to blow them out.

At the next draw, hounds had a brace and a half on the move, but again thick cover made it impossible for hounds to get through so after some confined hunting the huntsman decided to move on.

Robbie McCracken’s covert, close to the road, was blank as people with lurchers were there a few days earlier, and in Oliver Reid’s plantation some 1,900 trees had been removed as a result of ash disease so there was little cover left for foxes. But there was better luck in Flough Bog as a fox was quickly away with the pack hard on his heels, which was amazing as scent was almost non-existent. The pack worked hard on the line and they eventually marked him to ground.

This was a determined display by the huntsman and his pack despite the extremely difficult scenting conditions. Hospitality was later dispensed by Brian McCusker at his Gall Bog Bar.

The Iveagh Foxhounds were founded in 1825 initially as a harrier pack and in 1880 switched to a foxhound pack.