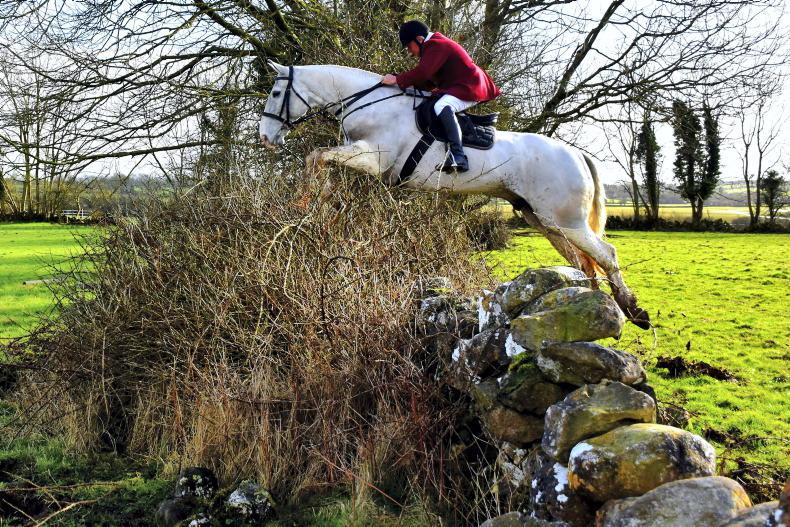 Jackie Lee, field-master of the North Galway Foxhounds on his Irish Draught hunter jumping a stone wall with briars at the Belclare meet \ Noel Mullins 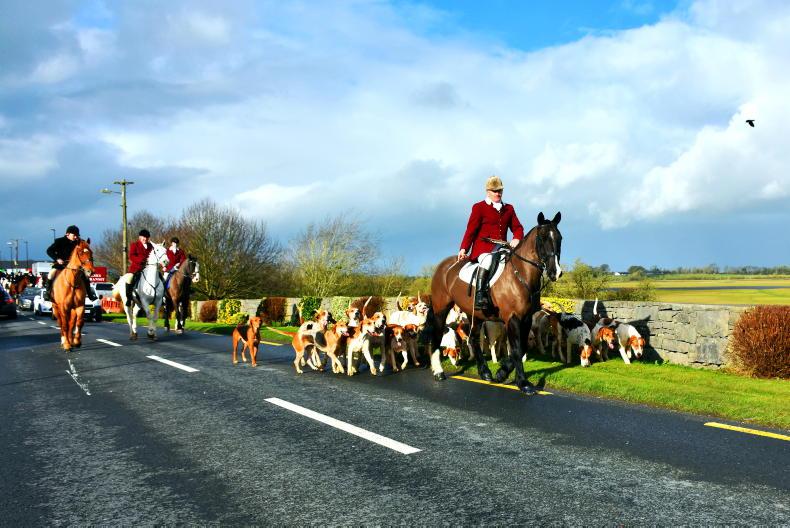 Huntsman of the North Galway Foxhounds, David Masterson, with Michael Lennon, Gabriel Slattery and Pat Mellett at the meet from Canavan's Bar in Belclare \ Noel Mullins
Previous Next

THE North Galway Foxhounds meet was at Frank Canavan’s Bar in Belclare. I wondered if he was the same Frank that I played with on a county selection rugby match in the Sports Grounds in Galway some 60 years ago, and to my great surprise he was!

It was during the era of GAA Rule 27, otherwise known as ‘The Ban’, designed to penalise players that the GAA regarded as playing ‘foreign games’ such as rugby. I was banned with some other team members for a year by the GAA, but Frank told me that he escaped the ban. He went on to represent Galway Gaelic Football at the highest level, gracing Croke Park with his football talents on numerous occasions. Frank’s mother’s family owned Ryan’s Bar in Gurtymadden, a favourite meet of the Blazers, East Galway and Grallagh Harriers, and he is proud of sponsoring the races that Minella Times and Best Mate won at the North Galway point-to-point.

As long as North Galway field-master Jackie Lee is riding up front, there will never be a day that the followers won’t be tested, as he always takes them over the most difficult line of country. Who says Irish Draught horses don’t have scope? The Irish Draught horse has a brain, and only needs to be shown once as they are quick learners.

In North Galway you can admire the sheer brilliance of Jackie Lee hunting Simpson, his pure Irish Draught by All the Diamonds, or showjumper Gabriel Slattery hunting Boots, his Cob-Irish Draught cross, jumping often puissance-height walls and briars over six feet and more all day long, and never moving a stone.

They not only know how to produce these horses but what’s also impressive is that they know to ride them. Jackie also produces showjumpers like Kishino, a 1.40m and consistent Grand Prix winner (now in foal), and he is also somewhat of a specialist in the Three-Year-Old Loose Jumping events, including tasting success, at the Dublin Horse Show. Another brave rider is Ray Lee, whose son Raphael is joining the Army Equitation School, and he should be a success as he has followed Jackie Lee for most of his youth! Huntsman of the North Galway Foxhounds, David Masterson, with Michael Lennon, Gabriel Slattery and Pat Mellett at the meet from Canavan's Bar in Belclare \ Noel Mullins

Michael Lennon MFH was the sole master out on the day. He is general manager of the Westport Woods Hotel and that morning catered for 200 guests for breakfast. The hotel has a Go Trekking Club, where they arrange cross-country, mountain and beach rides.

Huntsman David Masterson is as enthusiastic and popular a huntsman as one could find, and just lives for his hounds and his hunting. He is very experienced, whipping-in to the Ormond Foxhounds for 20 seasons, then kennel huntsman of the United Foxhounds in Cork before taking on the North Galways three seasons ago.

John and Kenny Henry and whipper-in Barry Finnegan of the Meath Foxhounds have been very generous in giving him some fine draft hounds. Whipping-in is showjumper and stallion owner Gabriel Slattery, horse producer Tom McNamara MFH, and Pat Mellett.

Tom McDonagh assists on a walkie-talkie from the road, and he had Joe McEvoy and Pat Ward helping out. But there is no walkie-talkie for Jackie Lee as he forgets to turn it off, and people can hear a running commentary for the whole day as a result!

Maura Morrin is a keen photographer often featuring in The Irish Field and keeps the hunt Facebook site up to date. Her husband Scotty is joint treasurer and her son Michael works with showjumper William Funnell.

Hunt treasurer Noel Keane was hunting with his son Ben, who is a fine rider, also Carl Reynolds and his son Finn on a Connemara pony on his first day out. Others were Eugene Kenny, Pearce Gibbons whose girlfriend Lorraine was on foot, Colie Delap, Ray Lee and Richard Reddington. John Glynn was hunting but his wife Clare was looking after baby Eva.

The followers had settled in so well in Canavan’s Bar that the huntsman stood at the door and blew a call normally to call hounds out of covert, but this time it was for the followers to leave the bar!

David drew Cunningham’s Bog on foot but it was blank so he moved on to Johnstown Quarry which has long slag heaps from the reclamation of the River Clare. It is always a sure find and hounds had a customer up and running, but he had plenty of cover and went to ground eventually in a rock pile. Meanwhile, Jackie took the followers around the most difficult line and Ben Keane, Finn Reynolds and Meg Price from Southampton were in their element with impressive riding skills.

In Killower many of the walls are built of reclaimed boulders which it took a JCB to lift them into position, and definitely not for the faint-hearted. But Jackie chose a spot for take it and the followers were committed and stepped up to the challenge. Gabriel Slattery not alone took on the highest part of the wall but there was a hole on take-off and only a less talented rider than Gabriel would be on the ground.

Hounds hunted hard in this huge covert and eventually marked him to ground in one of the many earths beside the wire fence.

Ballindiver is made up of two coverts running parallel to one another, and to complicate things further, there was at least a brace at home. There was plenty of jumping as the foxes and hounds ran between coverts, and the two foxes were similar in colour so it was difficult to tell which was which, but Tom McDonagh kept the huntsman up to date on the walkie-talkie, as they marked both to ground.

There was great woodland hunting in The Rocks and the valley which runs parallel to the road. However, the huntsman decided to stop the pack as they were close to a large flock of sheep, and blew for home after an action-packed day. While hounds hacked back to the truck, field-master Jackie Lee was at it again taking the followers home to Belclare across country.

As I had 250 kilometres to drive home, I got on the road but heard the followers settled into the hospitality of Frank Canavan’s Bar. As one person remarked, ‘If there was no pub, there would be no hunting’! 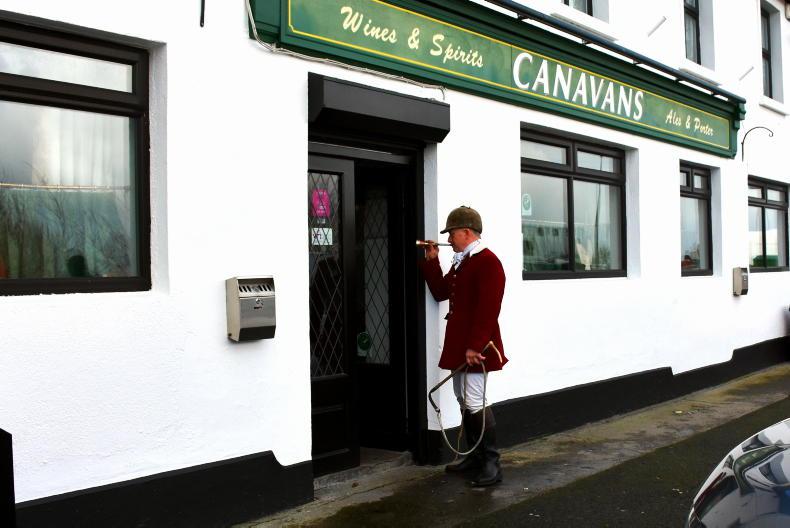 Irish Field Contributor
PONY TALES: We know covid was tough...but!
We are all delighted to see the hospitality sector back in full swing but isn't this taking it just a little too far...? 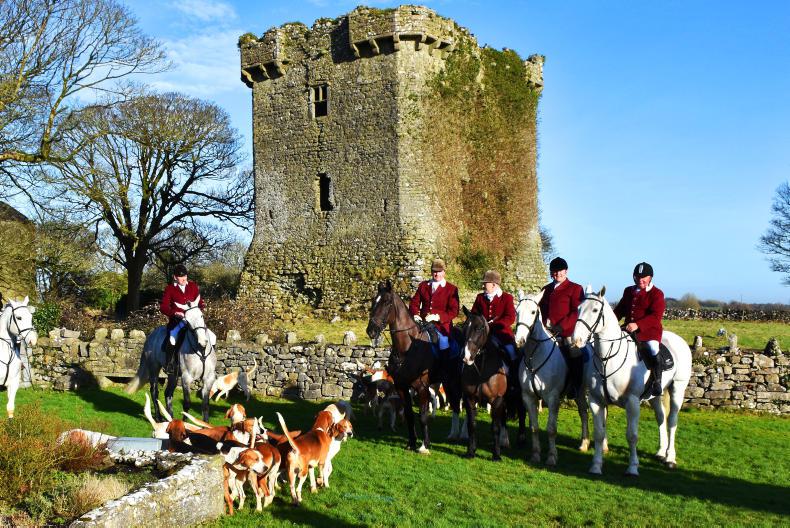 HUNTING: Nothing beats a good Irish hunter
Noel Mullins spends a great day hunting with the North Galway Foxhounds at their meet from TJ Gibbons' pub in Shrule, Co Mayo 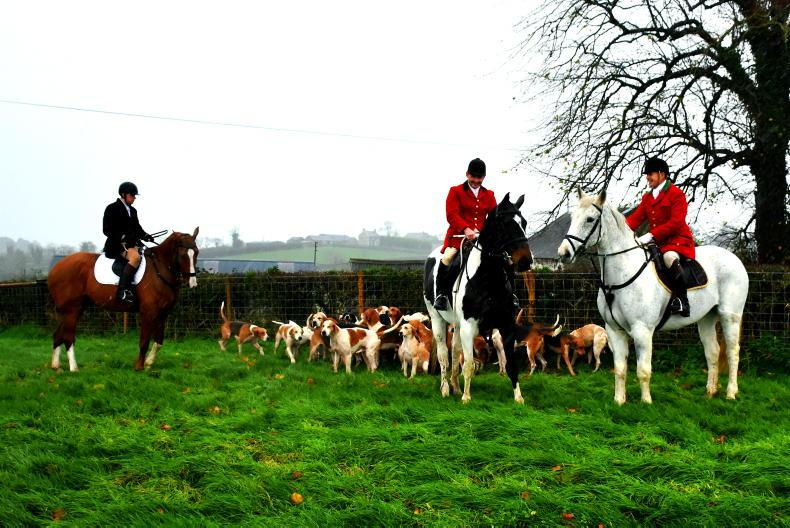 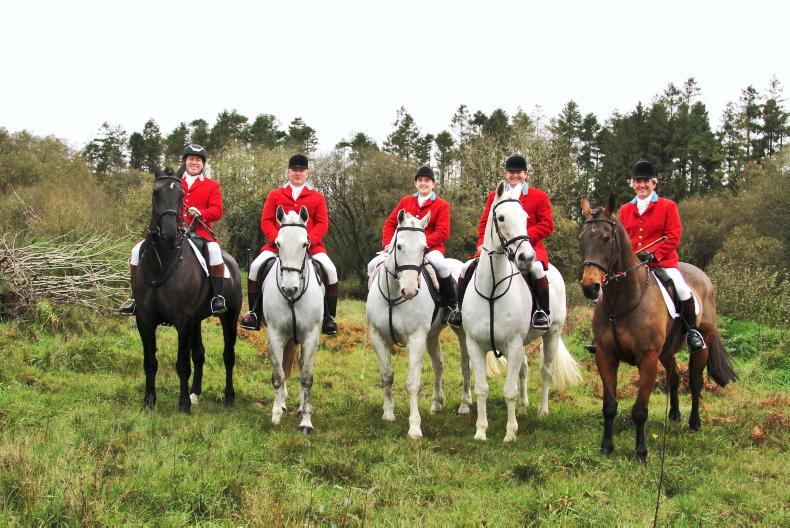