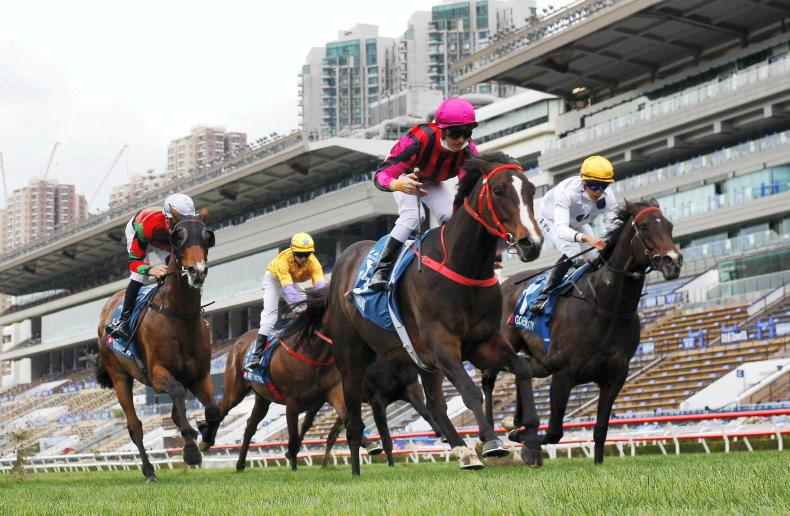 IRISH-BRED Waikuku delivered a stunning blow at Sha Tin last Sunday, to deny Golden Sixty a record-equalling win in the Group 1 Stewards’ Cup over a mile.

Aiming to extend his unbeaten sequence to 17 – the champion’s win streak ended after a second-place finish – his first defeat in nearly 900 days, leaving Silent Witness as the sole record-holder for consecutive wins in Hong Kong.

Given a supreme ride by Zac Purton, Waikuku lifted for his second Stewards’ Cup success, after prevailing in 2020, giving trainer John Size a seventh win in the race. Sent off as a 14/1 chance, Waikuku settled behind Healthy Happy who led for the most part, before taking over at around the 350m mark.

“The horse has trained up very well since the beginning of the season. He’s done everything correctly,” Size said.

Victory enhances Waikuku’s earnings to HK$43.80 million. The son of Harbour Watch, bred by Shane Molan, is now an eight-time winner in Hong Kong after arriving from Ireland where he was trained by John Oxx.

“I thought with the way the race was run, and the position we were in, if I could just get first run on him and have him (Golden Sixty) try and run me down again, that was what I was thinking, and fortunately today, we were able to hold on,” Purton said.

“Longevity has been his strong suit. He’s lasted all the way through from a very good preparation leading up to the Derby and he was a little bit unlucky the week before Derby – he had a problem and he ran second,” Size said.

Golden Sixty clocked a slick 21.95s for his final 400m of the race – a herculean performance, especially from the tail of the field and lost no admirers in defeat – his first since July, 2019.

Trainer Francis Lui said: “It was just the draw. The way the race was run, he needed to be closer but, from the inside, it wasn’t possible today.”

edges closer to the HK$100 million prize-money mark and closes on Beauty Generation’s all-time record of HK$106.23 million. Either the Group 1 Queen’s Silver Jubilee Cup or Citi Hong Kong Gold Cup on February 20th will be his next outing at Sha Tin.
MOST READ
PODCAST: Dublin Horse Show 2022 preview
VIDEO: Godolphin pays €1.6 million for Shamardal colt
THE BIG INTERVIEW: Johnny Levins -
VIDEO: Luxembourg scrapes home on comeback run
INTERVIEW - Max Wachman: "It is a dream to be part of an Aga Khan team"