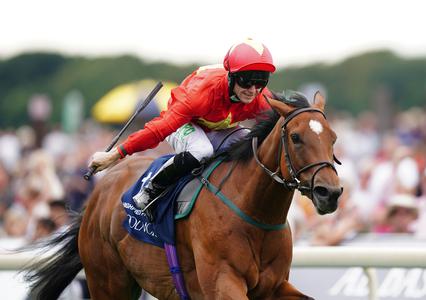 The five-year-old mare, winner of her last three runs at Group 1 level, will bid to back up her latest impressive success in the Flying Five at the Curragh when she heads to the $1million Breeders’ Cup Turf Sprint in Kentucky.

The John Fairley-owned daughter of Night Of Thunder started her remarkable winning spree on All-Weather Championships Finals Day at Newcastle in April, with her only reverse in five subsequent runs coming at Royal Ascot, where she was beaten less than two lengths in the Platinum Jubilee Stakes.

The decision to bypass last weekend’s Prix de l’Abbaye and instead head Stateside sets up a mouthwatering clash with American speedball Golden Pal, who is already a dual Breeders’ Cup winner having claimed last season’s Turf Sprint at Del Mar and the Juvenile Turf Sprint at Keeneland in 2020.

Wesley Ward’s charge is three from three on his home track, having also struck gold in last year’s Woodford Stakes and the Shakertown Stakes this spring.

Malton-based Quinn will no doubt have one eye on the four-year-old when he bids for back-to-back Woodford wins on Saturday, but could not be happier with own stable star.

“All being well, she goes to the Breeders’ Cup,” said Quinn.

“We are happy with her, so fingers crossed, that’s where we intend to go.”