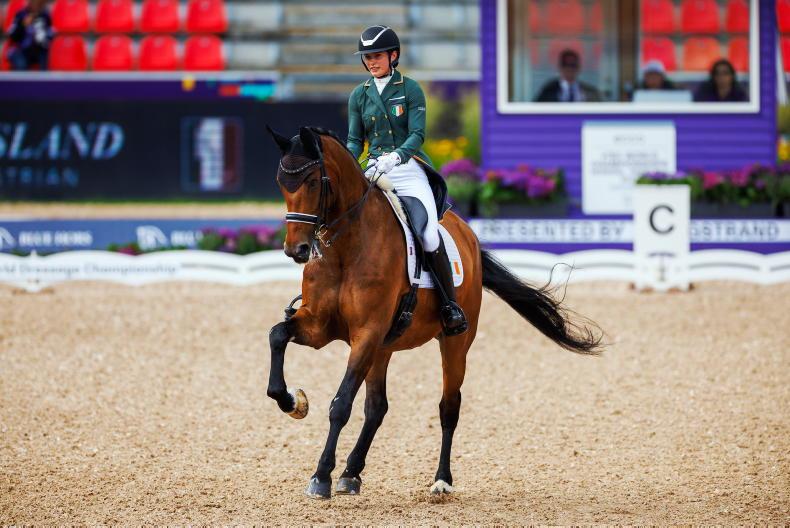 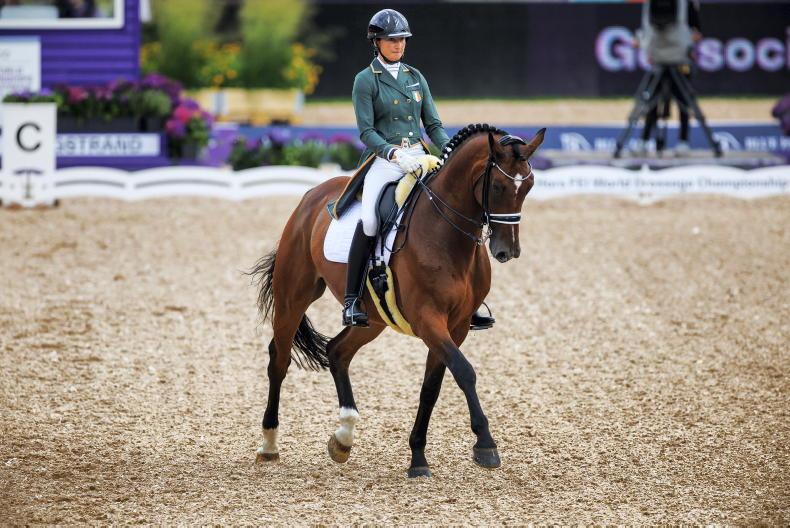 Sorrell Klatzko and Turbo at the FEI World Championships in Herning where they were sadly eliminated after the ground jury deemed the nine-year-old to be "uneven". After being checked out by Irish vet JP King, he was found to be sound and well \ Tomas Holcbecher
Previous Next

IRELAND lie in 17th place after mixed fortunes during day one of the Grand Prix competition at the Blue Hors FEI World Dressage Championships in Herning, Denmark.

First to go for the team, 26-year-old Alex Baker made an excellent senior championship debut with Dutchman, however it was followed by heartbreak when Sorrell Klatzko was eliminated with her nine-year-old gelding Turbo.

Devon-based Baker was sixth into the arena with the 14-year-old Dutchman who is owned by Alex, Tim and Carol Baker and Daniel Champion, and produced a score of 67.53%. The test had a couple of mistakes; they broke at the beginning of the first extended trot and missed one of the two-time changes, before bouncing back in the one-times.

A lovely square halt ended a fine debut for Alex who waved and smiled at the crowd as she exited the arena. She sits in 29th overnight.

Kildare-based Sorrell Klatzko, also making her debut at this level, was the second Irish rider to perform the Grand Prix on Saturday with her own and Janine Shoffner’s Turbo but was sadly eliminated after the first extended trot when the ground jury said the nine-year-old was “unlevel”. The Irish vet JP King has since given an update that Turbo is “sound and moving well”.

A teary Sorrell told the media she suspected the horse may have bumped himself before he went into the arena but was relieved, after being checked over, that he was okay.

A statement from Horse Sport Ireland afterwards said: “Regrettably, Ireland’s Sorrell Klatzko was eliminated during her Grand Prix test today (Saturday) at the FEI Dressage World Championships in Herning due to the opinion of the FEI judge at C, that Turbo was irregular in the movement. Turbo warmed up exceptionally well and looked fantastic prior to entry into the main ring.

“Given the significant atmosphere of the championships, it is not unusual that a first-time campaigner at world level for both horse and rider would become tense and lose the consistency of the movement. In the context of dressage, it is important to note irregular movement does not necessarily constitute an unsoundness.

“Team Ireland vet JP King has subsequently assessed Turbo and found him to be sound and moving well. He is now back in his box relaxing. Sorrell is obviously so disappointed with today but clearly relieved that Turbo is sound and well.” The Netherlands’ Dinja van Liere leads the way individually overnight on a score of 78.83% with the 10-year-old stallion Hermes, and The Netherlands hold the top spot in the team competition, ahead of Germany in second and the home nation and favourites for the team gold, Denmark, in third place.

Britain’s Gareth Hughes is in sixth place with Classic Briolinca on 75.97%. An enthusiastic crowd clapping them down the centre line spooked the mare who would not stand for the final halt where they lost valuable marks. The British team are in fifth place with Charlotte Dujardin and Lottie Fry to ride tomorrow.

Individual standings after day one