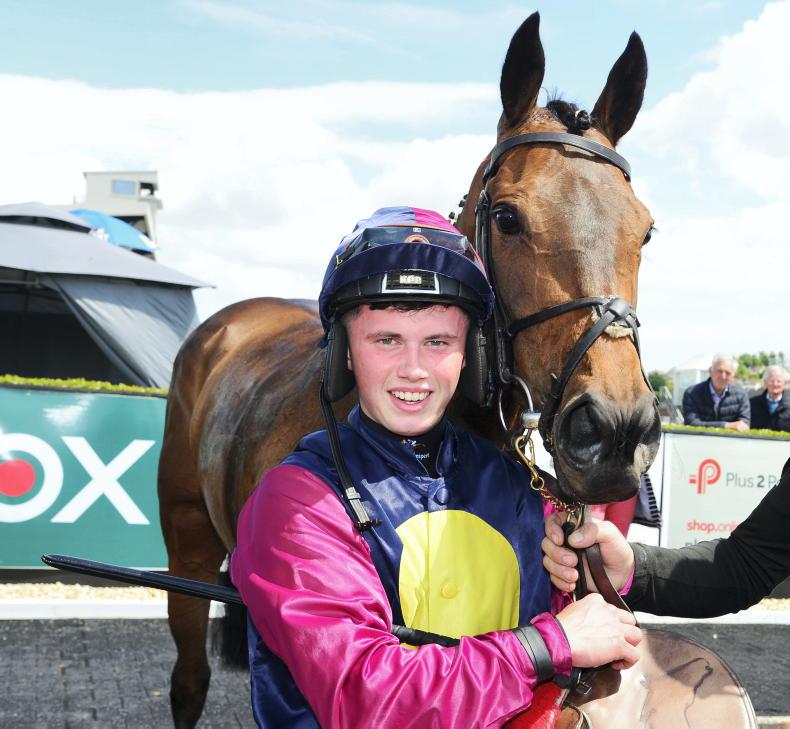 IN riding Dani Barcelona to win at Downpatrick last weekend, I was fulfilling a childhood dream. Coming from a family which is immersed in racing, all I ever wanted to do was become a jockey. Circumstances dictated that I had to wait a little longer than usual but when that moment finally arrived, it was well worth the wait. Even now, a week on, I am still pinching myself, wondering did it really happen.

My late father Sean (Cleary) died tragically following a fall at Galway, a couple of months before I was born. Unfortunately, there are very few videos or dvds of his rides but photos of his winners still adorn the walls of my grandparents’ house.

Growing up, I was always aware of who he was and what an accomplished jockey he had been during his short career. Although I lived in Carlow with my mother, we spent much of our time down in Athlone, with my grandparents Tom and Kathleen Cleary. My grandad trained horses and always had a pony or two around the place. I think I learned how to ride when I was no more than four or five years old.

By the time I went into secondary school, I knew that I wanted to do something with horses; I just wasn’t sure in what capacity. I had done a good bit of show jumping prior to that but hadn’t that much experience with thoroughbreds.

In my early teens, I started going into Jim Bolger’s at weekends and school holidays. It was a great education which prepared me for a future in the sport.

After a few weeks, I had little doubt that I wanted to make my life in racing. However, it was not until fourth year in secondary school, that I took the first big step towards becoming a jockey. Students were required to find a job that offered work experience every Thursday and I went to Willie Mullins.

After just one day in his yard, I decided to take the year out in order to devote my full attention to furthering my ambitions. During the first few months, I did a bit of everything; mostly riding out but also schooling the odd horse if I got lucky.

When it came time to return to school, I knew I wasn’t going back, although it took me some time to get around my mother! So, in March 2020, a few weeks after Al Boum Photo won his second Cheltenham Gold Cup, I signed on as an apprentice with Willie Mullins.

Before going to Closutton, I had spent a season pony racing. My uncle Thomas (Cleary) is a farrier and he got me a horse to get me going. After finishing second on my first ever ride, I caught the bug and ended up at seven or eight meetings before the end of the year. The undoubted highlight was competing at Dingle, a meeting generally regarded as the Cheltenham of pony racing.

Having obtained my licence, I had my first ride on the racecourse for my grandad at Dundalk. After that, I had a further two for Willie Mullins, one for Barry Fitzgerald and three more for my grandad. My final ride on the flat came for Emmet Mullins at Roscommon in June 2021. As an apprentice, I wasn’t allowed ride against professionals until I had ridden in three races for Willie Mullins. For that reason, I have yet to ride against my uncle Rory (Cleary), who was a classic-winning jockey on Mac Swiney last season.

Having made the decision to switch codes, I gave myself time, in order to gain more experience jumping and schooling horses. My licence came through in January this year but it was the following month before I had my first ride over jumps.

After riding Bruinneall for my grandad at Limerick in February, I knew immediately after the race that I had done the right thing. I loved the whole experience and couldn’t wait to do it all over again. I had another spin on that same mare a month later.

The first I knew I would be riding Dani Barcelona was at declaration time on the Thursday morning. I had ridden the mare out at home for past two years and knew that she was in great order. She is a real summer horse and had won a bumper for us at Clonmel last year.

Going into the Downpatrick race, I thought she had a right chance, if I could get her to settle. The plan was to sit in behind the leaders for as long as possible but I was going so easily four out, I decided to allow her stride on.

Once I asked her to lengthen on the run-in, she responded and went clear to win easily. Immediately after the race, it took a while for everything to sink in but once I was able to reflect on it, I got to enjoy and appreciate what had happened.

I am working full-time for Willie Mullins at the moment. I ride out for local trainers such as Barry Fitzgerald if they are stuck, but the majority of my time is in Closutton. The yard is very close to our home place down here in Carlow and both Willie (Mullins) and all of his staff have been so good to me since I first came there.

I really love working there and hope to stay as long as possible. Over the coming season, I’d hope to gain further experience over jumps, build up contacts and hopefully pick up some outside rides.

Sean Cleary Farrell was in conversation with John O’Riordan