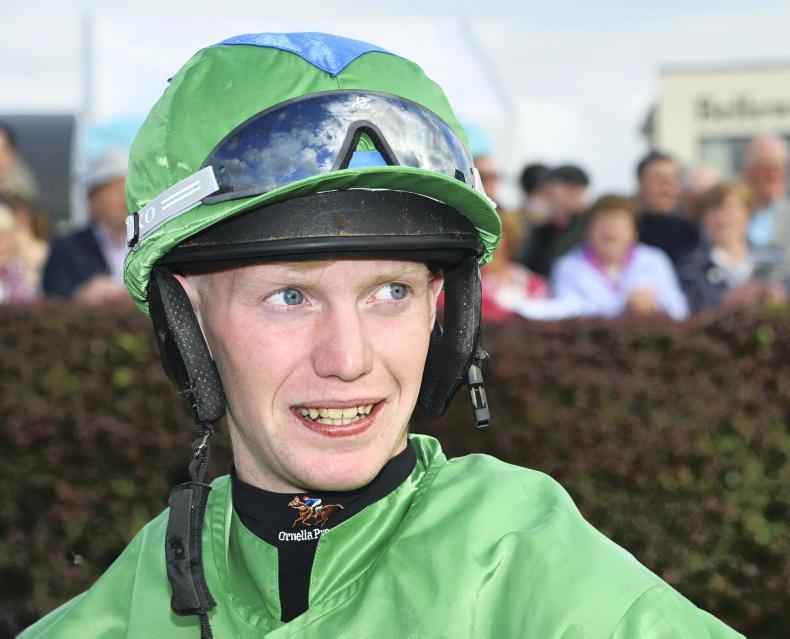 PENNY Jar gave me my first ever winner when successful at Bellewstown earlier this month. Aside from achieving that milestone at my local track, it was nice to do so for Patrick Downey, a trainer who has been one of my biggest supporters. Hopefully that win can get me going as a jockey and help me push on over the next couple of months.

My father Charlie, who always had horses and ponies at home, was my main influence starting off. Both myself and sister Caoimhe, who is a year younger than me, did a lot of ponies and show jumping from primary school up. We would have started around the age of six or seven and worked our way through the grades.

Garvan Donnelly trained beside us, so when I was 12, Dad sent me to Garvan in order to get an initial grounding in racing. I had never sat on a thoroughbred until I went into his yard, so effectively started from scratch.

Garvan was really good to me and I was with him until after my Junior Certificate. I went in every weekend and holidays, riding out three or four lots a morning.

The experience I picked up from Garvan has stood to me over the years, so I am very grateful to him for setting my career on the right path.

I spent a few years with Ger Lyons between my Junior and Leaving Certificate years. That was a huge stepping stone in dealing with racehorses and furthering my dream of becoming a jockey. It was while there that I truly realised I wanted to work in racing full-time and make my living from the sport.

Ger (Lyons) was great to work for, allowing me to ride plenty of work as I gained the necessary experience that meant I was capable of doing so. It was incredible getting to work alongside Colin Keane and Gary Carroll, two men I really looked up to in the game.

Around two years ago, the Christmas before my Leaving Certificate, I went to work for Gavin Cromwell. That summer, after finishing my exams, I went full-time in his yard.

Initially, I rode out and schooled horses but in March (2021) I got my conditional licence. Gavin (Cromwell) gave me my first ride under rules on Battle Of Benburb in Cork the following month. That was towards the end of the season but then, I had a further seven rides last season.

Six were for Gavin but I also had one for Patrick Downey. I had started riding out for the latter trainer just before Christmas (2021) in the evenings after finishing work.

I spent December and January over in Britain with Nicky Henderson. It was quite at home, so I felt it was the perfect opportunity to gain further experience in a large training centre.

While with Nicky (Henderson), I did plenty of schooling and riding work, so it was definitely a great education for me.

Although I did get a bit homesick, I loved it over there and wouldn’t rule out going back at some stage in the future.

Having had a few rides for both Gavin (Cromwell) and Patrick (Downey) this season, I was delighted to make the breakthrough on Penny Jar. The horse had run really well at Punchestown in November, before getting a break over the winter months. He had been working really well since he came back into training and Patrick (Downey) promised me that he was my ride.

I am very grateful to him for sticking to his word, as I know he could easily have put up a more senior rider. It was great to be able to repay the faith he showed in me by winning on the horse at Bellewstown.

On a personal level, it was a relief to get it done - to ride that first winner on the track. I suppose in a way, you are always trying to prove yourself, not just to others but to yourself as well.

While we fancied Penny Jar and expected him to go close, he still needed to go out there and get it done. Once the race was over, I allowed myself time to reflect and enjoy it, as I know you can only ride that first winner once.

I divide my time between Gavin Cromwell (morning) and Patrick Downey (evening) at present.

The former is obviously one of the biggest jumps trainers in the country, housing some leading grade one performers.

I am fortunate to be able to ride work with the likes of Keith Donoghue, Sean Flanagan, Luke Dempsey, James O’Sullivan and Kieran Buckley. Also, getting to school and sit on such quality racehorses is a real privilege, be it flat or jumps.

Patrick Downey only has seven or eight in training but has been a fantastic help to me. He does a great job with small numbers and has a few real nice young horses coming through.

I’m sure like everyone, he would have room for one or two more if the opportunity arose.

I will forever be thankful to Patrick for giving me my first winner as a licenced jockey.

Paddy O’Brien was in conversation with John O’Riordan