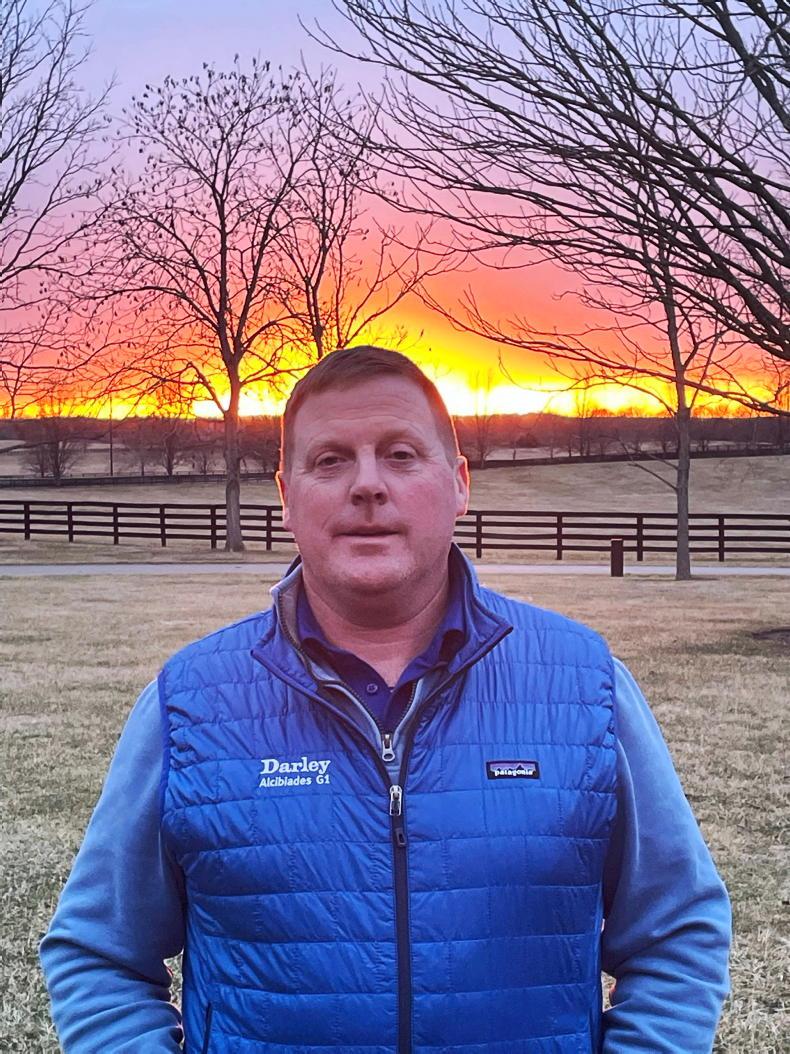 THE fairytale of Cody’s Wish winning the Breeders Cup Dirt Mile at Keeneland last month is undoubtedly one of the most special stories in racing. Given the background, with the colt forming such an unlikely bond with young Cody Dorman, it was a day of huge emotion, not just for sports fans but for people in general. As manager of Godolphin’s Gainsborough Farm, I am in the unique and privileged position of having witnessed this journey from its inception.

Although I was born and bred in Kildare town, my family had no involvement with horses or racing.

For reasons I cannot explain, I had a love for the animals from an early age. Having learned to ride when I was 11 or 12, I subsequently had little contact with horses during teenage years. I spent a couple of summers on a friend’s dairy farm which had a few horses but other than that, there was nothing.

After completing my Leaving Certificate, I went on to study Computer Science in college.

On my summer holidays, I secured a job working with the garden crew at Ballymany Stud.

There were upwards of 50 yearlings on the farm in those days and I think that reignited the spark in me. I spoke with Michael Osborne, who suggested that if I wanted to work in the equine industry, I should first spend a year at an agricultural college. So, rather than returning to my original course, I enrolled in Warrenstown Agricultural College for the 1995/96 academic year.

In preparation for this, I spent a month at Old Connell Stud in Newbridge, where I received a crash course on general handling. As it turned out, I never actually got to put this into practice during term, as the course largely comprised of land and pasture management, on a farm that housed sheep, cattle and pigs.

In June 1996, after I graduated, I went over to Kentucky to work for Jim Fitzgerald at Knockgriffin Farm. It was the first time I had worked at close quarters with horses on a full-time basis.

There were some great guys employed there at the time; they really took me under their wing and taught me a lot.

I received a great education at Knockgriffin Farm, one that has stood to me in the intervening years. It was during my time at Knockgriffin that I was introduced to Joe Osborne.

In November 1998, I returned to Ireland and spent the following yearling season(1999) with Flash Conroy at Glenvale Stud. Later that same year, I joined Kildangan Stud on the October Bank Holiday, after meeting Joe at Tattersalls sales.

I spent 10 years working for Godolphin in Ireland, before moving to Japan to take up a role as farm manager in January 2010. My remit was to oversee a farm that had stallions, 120 mares and 90 foals.

During my stay, I was also involved in developing Shiomi Farm; something I regard as a great career highlight.

After three amazing years in Japan, the opportunity arose to take over as Farm Manager at Gainsborough Farm in Kentucky.

I moved over in June 2013, so will be here 10 years next summer. With Godolphin being such a well-oiled machine, the transition was flawless, thanks in no small part to the support of a dedicated workforce.

We foal between 50 and 60 mares on the 1500-acre farm, before the young stock are weaned and sent to the sister farm, Dubai Millennium (500 acre). I am responsible for overseeing operations at both the aforementioned farms.

Every year, we start with fresh dreams as the yearlings are broken in preparation for a career on the race track. Until proved otherwise, each youngster has the potential to go on and become a superstar; although in reality, very few will reach such heights.

In 2021, we were lucky enough to have Mystic Guide, a colt who beat the best in the Dubai World Cup in Meydan.

Cody’s Wish, winner of his final three starts last term, was one that allowed us to dream big over the winter.

Over the past 11 years, Godolphin have been part of Keeneland’s Make A Wish Day where we invite children and their parents on a tour of the farm.

In 2018, Cody Dorman and his family visited Gainsborough. At birth, Cody was diagnosed with Wolf-Hirschhorn syndrome, a rare genetic condition that affects many parts of the body.

He can’t speak, is confined to a wheelchair, suffers frequent seizures, among other major lifelong difficulties. We were nervous bringing Cody out to see the foals, as we weren’t sure just how close he could get to them. What followed is something that will live long in my memory.

One particular foal slowly walked right up to Cody, laying his head in the boy’s lap. The interaction between Cody and that young foal was just incredible.

Two years later, Cody had been through a difficult period and his parents rang up to ask could they visit again. They hoped that seeing the now two-year-old would perk up their son but to be honest we had real reservations.

The horse was now in full training and as a colt he was more difficult to manage - he needed two handlers to accompany him as he was led out to meet Cody.

To our astonishment, it appeared as though he recognised his visitor; immediately calming, before once more approaching and putting his head in his lap.

A few months later, when it came to naming the two-year-olds, Mary Bourne, our office manager, came up with the inspired suggestion, Cody’s Wish. Although unable to communicate verbally, Cody Dorman uses a computer tablet to interact.

After the horse named in his honour had finished third on his first three starts, Cody informed us that the horse would not win until he (Cody) was present. Sure enough, Cody’s Wish won his first race, at the fourth time of asking, with Cody Dorman in attendance at Churchill Downs last October (2021).

Since then, there have been three further meetings between the pair, the most recent, at Bill Mott’s stables, the Wednesday before the Breeders Cup.

As before, Cody’s Wish changed demeanour as soon as he was in the company of his human namesake.

No matter how many times I have now seen this interaction, I never cease to be both amazed and appreciative.

On Breeders’ Cup day, Cody Dorman and his family were in attendance to witness the Bill Mott trained four-year-old win his seventh race, in the Grade 1 Dirt Mile.

It has since been confirmed that the colt will stay in training next year, so there could be another chapter or two in this incredible story. When Cody’s Wish’s career on the racetrack is over, he’ll stand at Jonabell Farm, which is close to the Dorman family.

I have no doubt that the bond between horse and boy will continue well into the future.

For my own part, I also see Kentucky as home; for the foreseeable at least. My wife and I have five kids, all of whom are still in school. I have been very lucky to work for Godolphin, in Ireland, Japan and now the USA.

The opportunities they have afforded me are greatly appreciated and I hope to remain in their employment well into the future.

Danny Mulvihill was in conversation with John O’Riordan