Title: HEART OF RACING: 'A day the whole family will never forget' 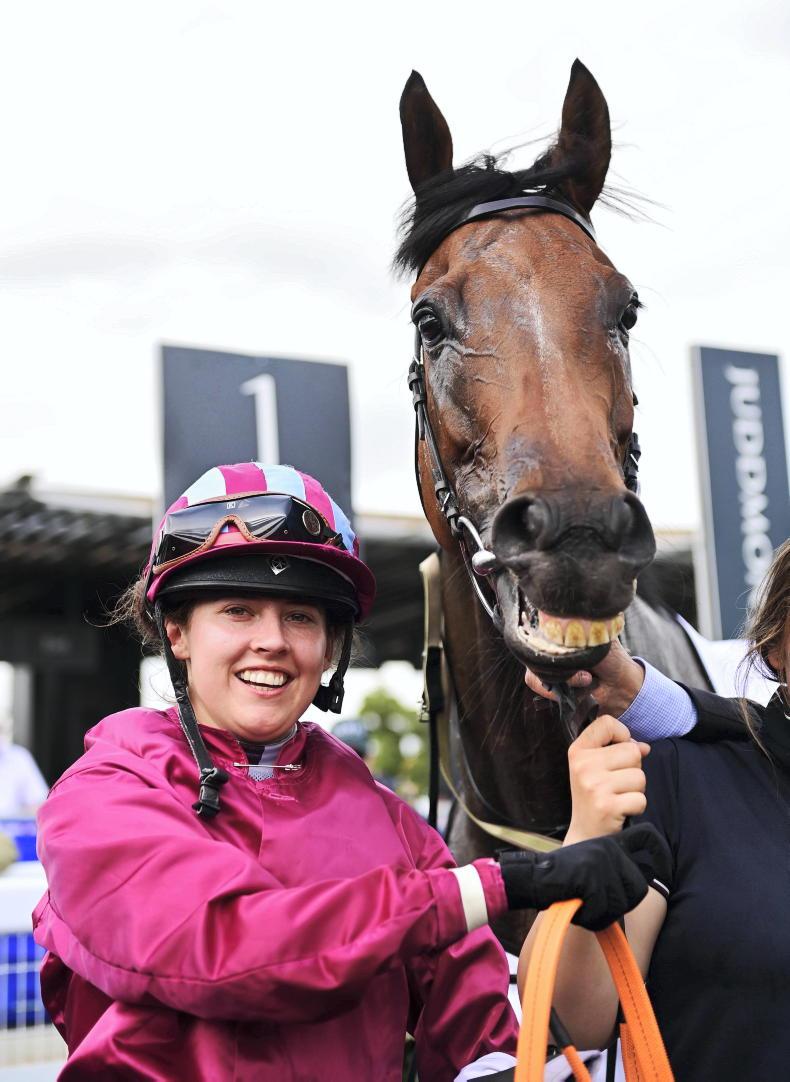 FROM the day I first received my licence in 2018, I always had ambitions of riding in the Ladies Derby.

For any female jockey in this country, it is one of the most recognised races in the calendar; one we all want to take part in. Despite never having ridden a winner under rules prior to last Saturday, I genuinely believed that I had the right horse going into the contest.

So, to gain my first ever success in such a prestigious race, on a horse trained by my father Pat and owned by my mother Una, made it a day the whole family will never forget.

My father, Pat enjoyed a memorable success with Chance Coffey in the 1995 Coral Cup at Cheltenham. That particular horse was bred by my uncle Bill, owned by my grandfather PJ and ridden by our neighbour and close family friend Gerry O’Neill. It was a real family affair – but unfortunately before my time.

The big day has long lived on through stories, video replays and photos. For us, Chance Coffey had been the horse of a lifetime, so, we feel extremely fortunate to have found Extensio.

Similar to most kids with a strong background in racing, I learned to ride almost as soon as I could walk. Being more of a hunting family, my brother Patrick and I mainly took part in Pony Club activities during the summer months and hit the hunting fields during the winter.

Soon the world of pony racing grabbed our attentions, with our annual family holiday consisting of a trip to Dingle. Patrick competed to a very high level in pony racing, while I on the other hand, was very content with picking up a few spares here and there.

However, the whole experience wasn’t lost on me, proving to be a great education for race-riding in future years.

My biggest equestrian achievement prior to last weekend was winning the 2015 Scarteen Hunt Cup Race. Hunting is still a very big part of my life.

The only career I ever wanted to pursue was one within the thoroughbred industry. After completing my Leaving Certificate at the Ursuline Secondary School in Thurles I decide to study Equine Business Management at Maynooth University.

Having ridden out at home since a child, and every weekend when home from boarding school, I didn’t want to give up that direct connection with horses during my third level education.

The added benefit Maynooth had was its location – situated in Kildare, it meant that I could continue to ride out every morning before lectures, with local trainers. During my studies I worked for Arthur Moore, Edward Lynam and Ross O’Sullivan.

I completed my first-year summer placement with Brian Meehan in the UK and chose to complete a 12-month international work placement for my third year of study.

This consisted of two six-month placements: I spent the first six months employed as a work rider for Chris Waller in Australia, before moving to Gerry Dilger (Dromoland Farm) for yearling sales preparation in Kentucky.

On the day I graduated in 2018, I also picked up my apprentice licence at the Turf Club. My father was already making the journey up from Limerick to Kildare so we thought we may as well kill two birds with the one stone!

We were very fortunate to come across Oor Jock, a seven-time winner and veteran of over a 100 starts. He proved to be the ideal school master. Oor Jock has since retired to Herbertstown, where he has a home for life.

After University, I continued to ride out with Ross O’Sullivan while working at Punchestown Racecourse.

An opportunity arose in 2019 to join BBA Ireland, where I have now been a member of the Transport Department for three years. I follow a very different lifestyle to most flat jockeys; in that I am in full-time employment within an office – and with that comes a mix of challenges.

Weekdays I ride out for Ken Condon, weekends at home in Limerick riding out for my father, and in between I try to stay on top of my fitness by swimming and going to the gym in the evenings after work. Thankfully, I have very supportive family members and employers who help make it all possible.

In 2018, my father headed up to the Goffs Autumn Yearling sale to drop off a yearling for a neighbour. To our surprise, he arrived home later that day with a different horse in the box – a yearling colt by Xtension, who was recommend to him by Michael Browne.

At the time, my brother Patrick had just returned home after a short but successful career as a jockey in the UK. He was given the task of breaking him.

Dad’s spontaneous acquisition soon looked like a lucky find. As a two-year-old Extensio was a bit small and light so we decided to give him another year to develop and mature.

The gelding made his first appearance at Naas with me in the saddle. An educational day for both, we finished down the field but we were very happy with how balanced and strong he had gotten. We decided to get a more experienced jockey on board to gain another point of view.

While I would love to have been on board, I wanted to do what was best for both the horse and our family from a training point of view, so it made sense for Ross Coakley to educate Extensio.

Ross and myself took turns over the next few months before Billy Lee won on the horse at Tipperary in June 2021 over a mile and a half. I was back in the saddle for the next start at Ballinrobe, where we finished fifth. We had three further races that season all which resulted in second and third placings, including our final start which was a ladies race at the Curragh in September.

Extensio was put on a break and I headed into a busy season at the thoroughbred sales.

Last Saturday, everything just fell into place for both Extensio and I. Going out, my plan had been to jump off smartly, get a good position about fourth or fifth and hold it.

I knew that the horse loved a big galloping track and would stay the mile and a half well.

A small family operation, having a winner any day is cause for huge celebrations. However, to win the Ladies Derby at the Curragh, with a horse produced by my family made it incredibly special.

We were all very emotional post-race, with the absent Patrick being foremost in our thoughts; now based in Hong Kong, Covid restrictions mean he hasn’t been home in three years.

I look forward to the future, celebrating many more winners – either trained, ridden or bred by an O’Donnell!

Sylvia O’Donnell was in conversation with John O’Riordan