Title: HARNESS RACING: Roche doubles up in the sunshine

Billy Roche, Tom McDonogh and Darren Timlin were among those celebrating success at Annaghmore 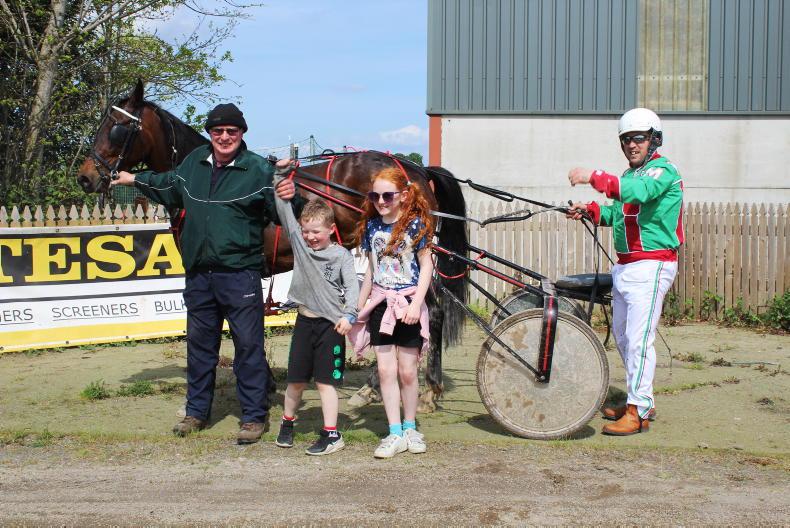 Three generations of McDonoghs with Highbrooks Ignite after their success \ DC

BILLY Roche was the man in form at a low-key meeting at Annaghmore, Co Armagh last Sunday. The Red Baron drove a double with Vaillant De Gueham (13) and Devoir Math (9). The meeting was held in glorious sunshine in front of a good attendance.

Billy got off the mark in the opener. The betting market made the race to be between Billy’s Vaillant De Gueham and Freddie Kavanagh’s Fleche Extreme. Fleche Extreme put in a clear round of trotting to be second.

The G grade pace saw an upset when the McDonogh’s Ballybay, Co. Monaghan-trained Highbrooks Ignite (touched 6/1) pinged the gate and did not see a rival.

Father Tom trains for his son Gabriel who drove the four-year-old mare. Ironically Highbrooks Ignite is out of a Ladyford mare (Ladyford Lizzie) as he usurped the well thought of Ladyford Conquest from the Stewart family barn.

“Gabriel bought this wee mare himself,” was part of Tom’s comment. Monaghan has very few harness racers, perhaps they need another Oliver Brady to stir things up.

The skewbald horse See The Stars (Ciaran Morrison) came in for good support but broke on the first turn. Quite often when a decent horse breaks he is all at sea, where an old rogue can get back down easily.

See The Stars has Abercrombie, Matts Scooter and Falcon Seelster on his page, all pacing royalty. He gets the colour through Rorschach and Millards Gold.

Ciaran Morrison had a day he will want to forget as the favourite Extrem Ryld led into the straight but then galloped.

Devoir Math had been tormenting his compatriot for a good half mile. You have to stay trotting!

“I train these older horses lightly,” Billy told compere Sean Duggan, “and it seems to be paying off.”

Ivan Swindle had a tough year in 2021, coming through heart surgery. The Brookeborough man’s heart will have lifted when Epiette driven by young Luke Timlin, led out and made all in the Grade F trot. Chipie Des Landes was a gallant second for Sean Kane.

The winning connections were spotted in a Fivemiletown hostelry on Sunday night.

“The win was Epiette’s first ever, she didn’t even win in France,’’ said Darren Timlin, proud father of the winning driver. This was no small achievement as Epiette had been in the best of hands previously.

The betting public won the battle at the big Bernie Kelly Memorial the previous weekend but the old enemy got compensation here with four beaten favourites. Shane O’Neill’s North To Alaska usually blooms late in the year so maybe the crowd thought he would need the run in the top grade pace.

Ricky Hanson’s Master Plan (off 40 yards) and Derek Jennings’ Newtown Shadow (off the gate) were both nibbled at.

In the end the Meadowbranch ‘super sub’ Noel Ryan came through with North To Alaska on the line to pip the Coleraine raider.

The two fixtures this weekend are at contrasting venues. Portmarnock (off the R107 Malahide Road) will run today while tomorrow at 11am there is a meeting at stunning Inchydoney Strand, near Clonakilty.

The local committee at Inchydoney don’t have any say in the start time as the course is ‘prone to flooding’ so to speak.

www.irishharnessracing.co.uk will carry full results, this weekend’s cards and other information.