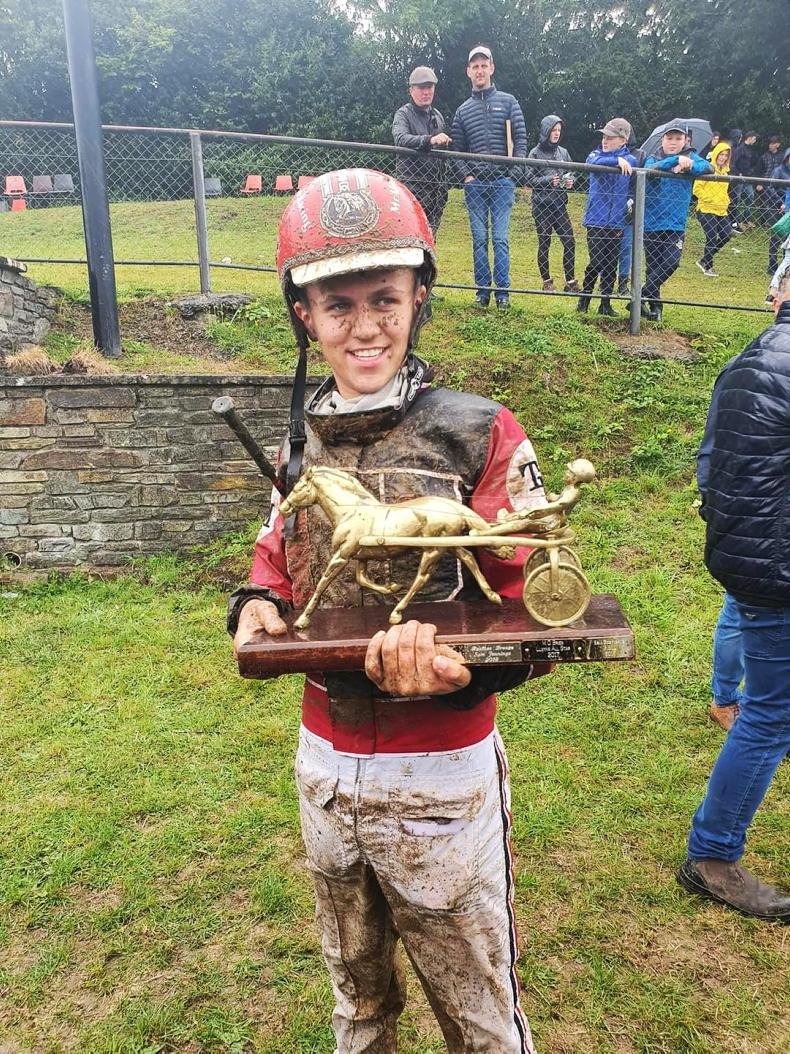 DUC D’Arry in the Paddy Connolly Memorial Trot and Northern Pride in The Murphys/Hurley & White Grand Prix were the big winners at the Ballabuidhe Festival which made a welcome return to the West Cork Harness Racing Calendar after a two-year break.

Both finals had drama aplenty. In the Trot final Duc D’Arry was all the rage in the betting ring and led from the start. Turning for home on the second lap of four he went off stride, but driver Donal Murphy kept him down. Bibi Dairpet and Destin De Larre tried in vain to peg him back but Duc d’Arry was not for catching .

“It’s a great day for myself and the family,” winning owner Denis O’Reilly told The Irish Field. “Growing up I always wanted to win at Ballabuidhe but never dreamed of winning a classic here. We enjoy the night, but we keep focused for the Maven Trot at the Red John Memorial Weekend.”

Northern Pride, owned by the McAleer family from Chapelwood Stables in Rolestown, County Dublin, oozed class when landing the Murphy’s /Hurley & White Grand Prix for pacers. The 16-year-old Troy McAleer drove with confidence beyond his age.

Drawn in pole position McAleer sent this son of Bettors Delight to the front at the start and was tracked by Benny Camden for most of the trip. Turning for home Northern Pride made a false step, and actually snapped a hobble but he had the class to get back down pacing. The winner backed into odds-on.

The McAleer and Joyce family flooded the presentation area to welcome home the winner. Northern Pride, who broke the track record in Lyre a few weeks ago, also set a new record for the Ballabuidhe track in the heat on Sunday: 2’25.2 is the newly ratified track record.

Newtown Major won the consolation final for the same connections. Both are trained by ‘TV Tom’ Heavey and will be big players at the Red John Memorial later in August. Tom earned his nickname when he got a little bit stage struck when RTÉ used to cover harness racing at Dublin Horse Show.

Comete Des Landes looked a winner in his heat on Sunday but made a break. The mare gained compensation in the consolation final. Donal Murphy took up the running with a lap to go and she won with her head in her chest.

Porterstown Aled and Spartan Warrior locked horns again and this time the former with Derry McCarthy on board got the verdict by the narrowest of margins.

Sixteen year-old Leah Mc Nevin from Rathcoole in Co Dublin gained her first winner in west Cork when landing the spoils on Crack A Smile in the Grade F pace. The son of Hasty Hall galloped twice but his driver was able to steady him for a five-length victory.

The Kane family from Co Meath visited the winners enclosure twice over the weekend. Immortal John gave Mark Kane an easy assignment on Sunday when winning the Grade D Pace.

His brother Patrick flew home from England on Monday morning to partner Miss Pantastic to a facile victory in the Grade E Pace. Their cousin Sean was not out done when steering Highland Princess to win on Sunday.

Oisin Quill was also on the score sheet with the Wallace-owned Newtown Killian in the Grade G/G1 Pace and another Quill brother (Seamus) was a winner on Beach De Bellouet.

Despite the rain on Monday the meeting was a huge success and all results can be seen on www.irishharnessracing.com.

Thanks go to all sponsors, especially Murphys Irish Stout a long-standing backer of harness racing in west Cork.