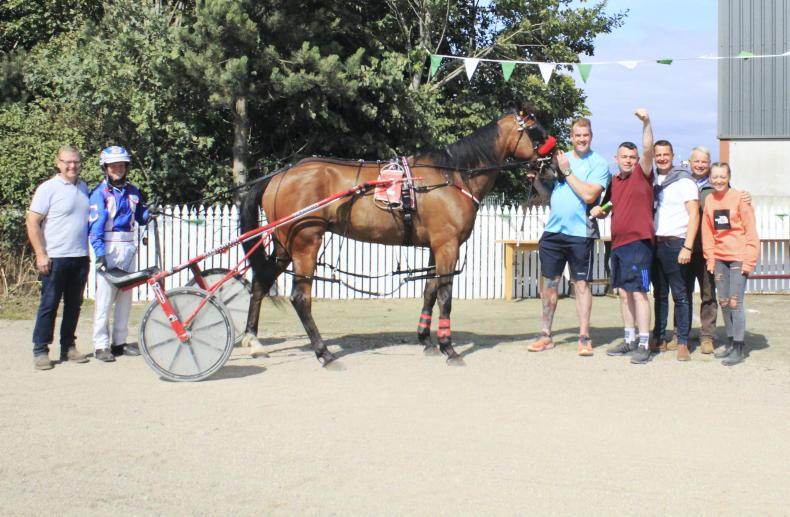 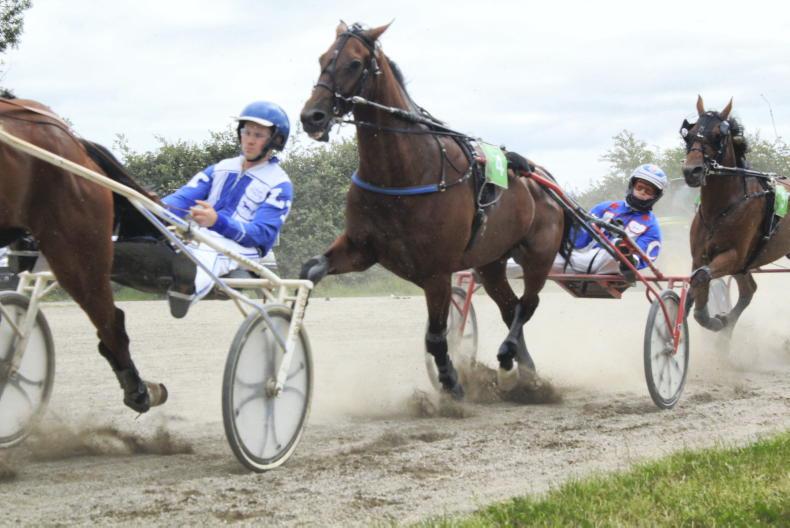 Jonny Cowden with Celui La Laye (no.4) is biding his time behind \ Dan Carlin
Previous Next

JONNY Cowden was the only driver to record a double at Annaghmore last Sunday.

An 11-race card also provided wins for a pair of smaller stables and success for some raiders from Munster.

John Richardson, Patrick Kane, Billy Roche as well as Jonny have all driven doubles and trebles at different times in 2022. Indeed, all of the current top eight reinsmen in Ireland (see table) could acquit themselves well in any company.

Visiting drivers to Ireland have all been taken aback by the ‘no quarter asked nor given’ nature of the racing.

Coincidentally, confirmation came through recently that the current champion Patrick Kane jnr has met the criteria to represent Ireland in the European Driving Championship in Belgium this autumn.

Ireland has endured a few near misses in these type of competitions in recent years. Hopefully Patrick can draw luckily from the dreaded borrowed horses. A good result would get the Trim farrier into the World Championships.

Back to Jonny’s day in the sun (quite literally). The Cowdens have Celui De Laye as sharp as a tack and the good looking 10-year-old was only toying with Bingo de Connee (Calvin Broughan) and Biniou de Beuvron (Charlie Flanagan). The race was confined to ‘apprentices’ and clocked 2’38.8.

Two races later and Jonny won with a pacer, namely Gareth Galway’s Stateside Cody. The win produced a hearty cheer from the crowd as the Galways are the type of salt-of-the-earth trotting family the sport so desperately needs. John (Big John) Galway and his son Jack rarely missed a fixture and were Gareth’s grandfather and father.

“Gareth still trains him,” said Jonny afterwards, “I just got the drive. I worked him during the week and he felt like a nice horse.”

As Jonny stables in the same yard as another son of Armbro Deuce (Double Deuce) he is well placed to compare them.

Another true grass roots stable, Gareth’s friends the McAteers, got on the score sheet again when Cyclone de Couriere won the E to F trot. Dan McAteer of Randalstown gave the 17 hands gelding a confident drive.

“That’s around 12 he has won for us,” stated Dan’s father Jim during the week. “We started him later this year as we were busy in our plastering business. He seems to have stopped making breaks in his races.”

“Longest traveller” gets a separate heading in some newspapers as the theory is, more expense and effort should indicate a live chance. Those who punt after this maxim were rewarded on the day as both Inspire Me (Mikey Kelleher, Macroom) and Zip Car One (Pa Manning, Limerick) ran out winners.

Inspire Me was particularly impressive in the four-year-old trot as she broke at the start, threw away a good 60 yards and yet made a comeback to beat the well-regarded Immaculata (John Richardson).

Zip Car One was a decent journeyman for Alan Davies in Wales. The Mannings can get one ready and 7/4 to 4/5 tells its own tale. The grade F winner went 2’04.3 and should progress up the grades.

The IHRA three-year-old pace was quality rather than quantity as only four filed in behind the car.

The race was robbed of some of its intrigue as Shesnoaprilfool with John Richardson galloped at the gate. Hopper Foran had a go with Sweet Rock but Churchview Camelot (4/6) and Alan Wallace senior had too many guns and won going away in 2’02.4.

Alan is now one of the senior figures on the track but he is definitely no back number. He has some plum drives at this weekend’s Vincent Delaney Weekend in North Wales.

Buliano (Billy Roche for Joe Gannon) won a trappy-looking high grade trot. The runner-up Feugeres Erem was carried out on her shield as usual. The winner was backed from 5/2 to 6/4.

The bookies got a bit of respite in the high-grade pace when 4/1 shot Cash All (JR) got up on the line to foil a gamble on Walter Stewart’s Ladyford Dollar who was a game second in 2’01.2.

The win was a nice sighter for the Red John Memorial for Cash All who really should be winning races like this.

The KTR Syndicate’s Extrem Ryld goes to Tir Prince, North Wales tomorrow buoyed by an impressive win in the C to D trot. Gavin Murdock has now got him round twice ‘level’ and if Extrem Ryld stays down in Rhyl, he will at least be placed. Fair Play Briolais was an honest second for Longford man Ronan Norton.

The crowd had no choice but to watch her now as Watch Me Now attained a walkover in the IHRA two-year-old pace as she was the only entry. Bernard Nicholson drove.

Racing continues at Bishopsland, Cork today and Portmarnock tomorrow. The stakes grade fillies and colts will be at the VDM in North Wales. Sources say that despite the counter attraction Portmarnock will stage a strong card.

See for yourself at www.irishharnessracing.com 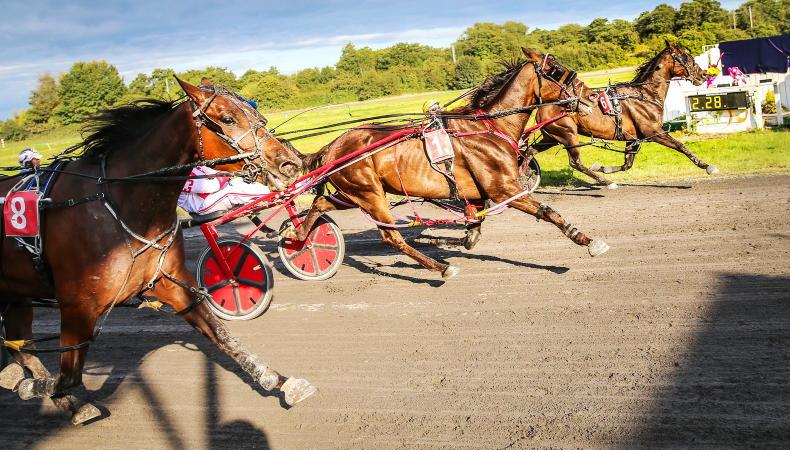 Dan Carlin
HARNESS RACING: The master JR collects the Cash
The ladies trot and pace were the two features treble but a treble keeps Patrick Kane in contention for the The Irish Field leading driver 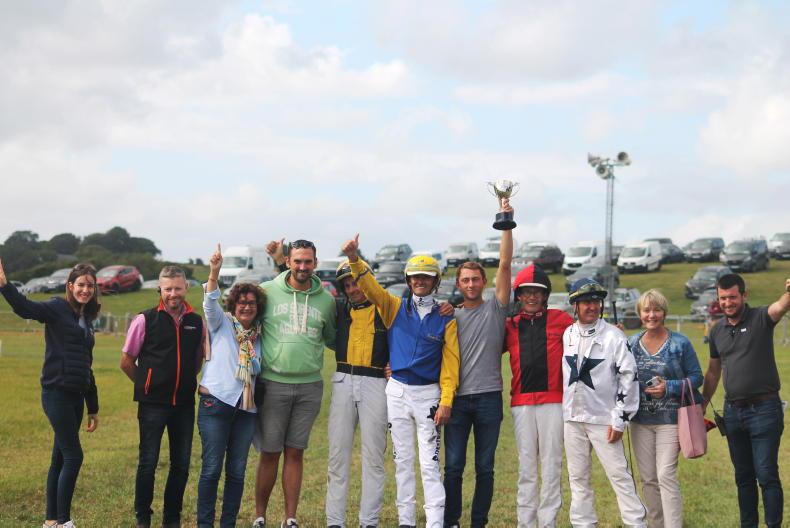 Dan Carlin
HARNESS RACING: Ouvrie frankly superb
There was an international flavour to the participants at the Red John Meeting 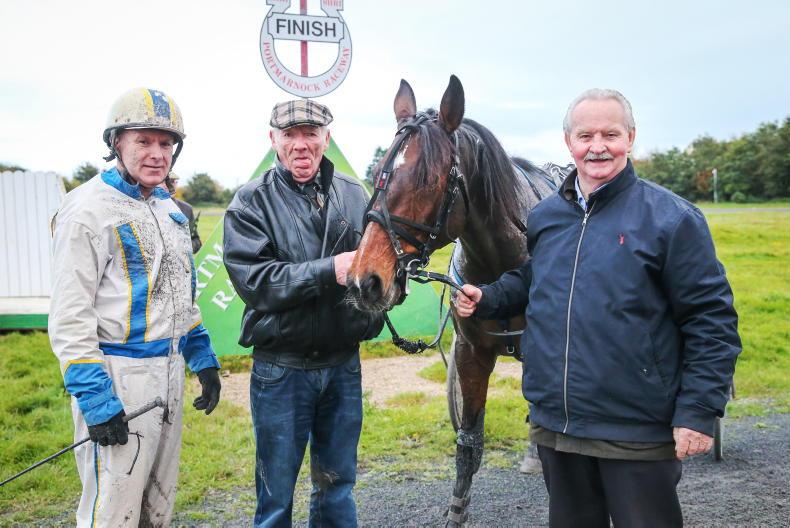 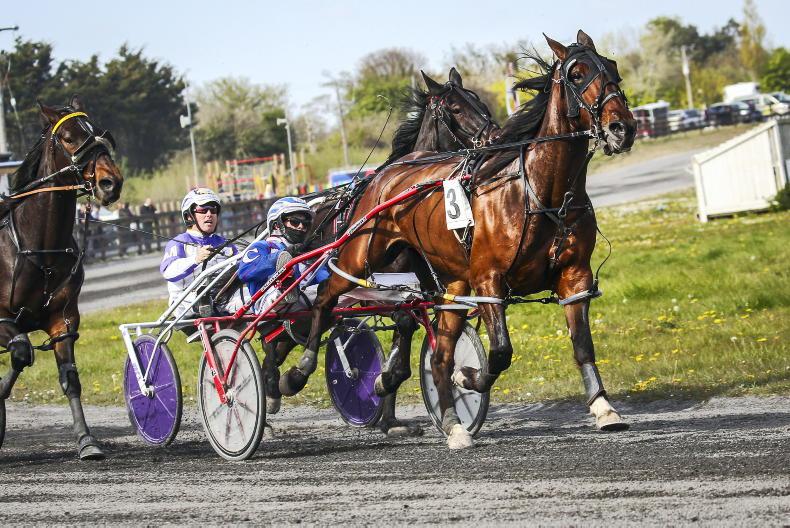 HARNESS RACING: Cowden and Roche on the Double
Billy Roche and Jonny Cowden both recorded doubles on the day in Portmarnock