Title: GO FOR GOLD: Small breeder Hayde 'on a high'

Co Kilkenny breeder Michael Hayde breeds from three mares in Co Kilkenny and was over the moon to see a home-bred sell for €40,000 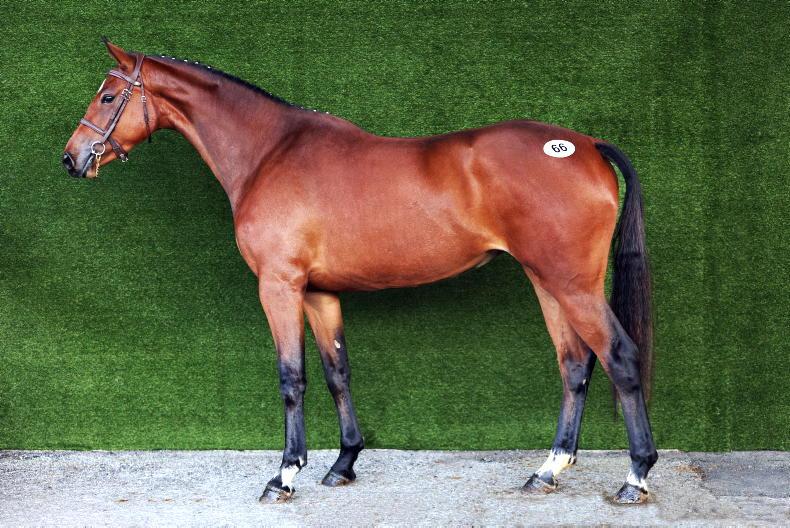 ONE person who declared himself “on a high” following the Goresbridge Go For Gold Sale was Michael Hayde, breeder of the MBF Sport Horses-consigned Balief MBF (Lot 66), an Irish Sport Horse filly by HHS Cornet who was purchased online by the USA’s Megan McIver for €40,000.

“I’m a big fan of the Hughes stallions and was really taken by Cornet when I first saw him as he is a lovely model of a horse with plenty of quality; he was then three and had just started covering,” commented the Co Kilkenny breeder.

“I like to sell my stock privately as foals and MBF Sport Horses sold a Presidential Ball gelding (the similarly named MBF Balief) last week that was bought at the same time as this filly.”

Balief MBF is out of the 2004 Aldato mare Lazio who Hayde purchased privately 11 years ago. Being a daughter of the I’m A Star mare Royal Irish, she is a full-sister to Celta Vigo (CSI3*) and comes from the family of Raphael (CCI4*-L). Hayde has retained Lazio’s 2021 filly, Balief Final Time, who is by the Hughes Horse Stud’s Quality Time and she is back in foal to that son of Quantum.

“I always name my stock as foals and I think it’s very important that if a breeder holds a prefix it should be retained in some form in the horse’s name if it’s changed. MBF Sport Horses sold an Olympic Lux filly on Wednesday, MBF Brislane (Lot 80), who wasn’t bred by me (in Co Tipperary by Derek Baskin) but was out of a Riyalan mare that I had bred named Balief Rubi and that caught my eye as I was going though the catalogue.

“I had a bit of a buzz this year at the Dublin Horse Show as the five-year-old middleweight hunter winner, Karen King’s home-bred My Diamond Solitaire (reserve supreme at Balmoral), was by a Loughehoe Guy stallion that I bred, Balief Guy, who is a half-brother to Balief Rubi.”