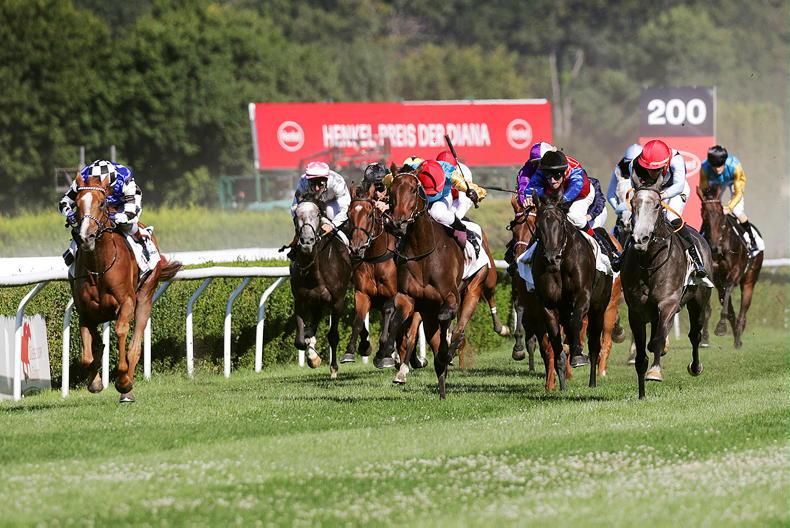 DÜSSELDORF racecourse, which staged the 164th Group 1 Preis der Diana last Sunday, is unusual in that it is uphill and down dale with tight bends, which leads to plenty of horses becoming unbalanced, much like will often happen at Epsom and Goodwood.

This was the case last week with Aidan O´Brien’s Toy, who started favourite at just under 3/1 after her game effort to finish second in the Irish Oaks, as she never really got into the race under Ryan Moore who reported that the filly just did not act around the track.

The same goes for this column’s fancy Well Disposed, ridden by Billy Lee, who dropped right out and finished last.

When the going is fast, as it certainly was on Sunday, the track often favours front-runners, and Kerrin McEvoy gave a fine display of the art of front-running by making all on 16/1 shot Toskana Belle, who scored by a head for new owners Australian Bloodstock and trainer Andreas Wöhler.

Wöhler had booked the Australian when he discovered that McEvoy was riding the previous day at Ascot in the Shergar Cup, but at that time Toskana Belle was not even in the Preis der Diana given she was supplemented last Monday at a cost of €50,000.

Toskana Belle went straight into the lead and set a strong pace. Coming into the straight there were still half a dozen possible dangers, most notably Mylady and Wagnis. Mylady was one of two fillies in the field and had run in the German Derby last time out where she finished tenth with Wagnis one place behind her.

She charged down the outside here but she failed to see out the race and it was Wagnis that pushed the winner closest. Indeed, she can be regarded as a little unlucky as she only failed by a head and may have won with just a few more strides. She was also disadvantaged by a bad draw, as she has been at Hamburg.

However the winner was nothing if not game and just kept pulling out more in front. Her trainer Andreas Wöhler, who was making it back-to-back wins in the race and six in all, surmised that 10 furlongs was the filly’s best trip and he has international plans for her now.

“The only race in Europe that would suit is the Prix de l’Opera on Arc day; however the owners are keen on finding a suitable race for her in the United States.”

The optical impression that the pace was strong was confirmed by the time of the race, which lowered the track record (set by Wöhler’s Palmas in this race last year) by almost a full second.

Toksana Belle has an interesting background to say the least and this is well explained in the Breeding Insights column on pages 18-21.

She started her racing career this spring in France, firstly finishing unplaced in a Saint-Cloud maiden in early April, before getting off the mark in a modest maiden in Evreux a month later.

She then showed spectacular improvement to win a listed race for three-year-old fillies at Düsseldorf and her experience of the track was certainly an advantage last Sunday.

That race brought her to the attention of Australian Bloodstock, who secured her and sent her to Wöhler after she finished third to Wagnis in the Group 3 Diana Trial at Hoppegarten.

She now has an international rating of 112 and will be a force to be reckoned with wherever she shows up next.