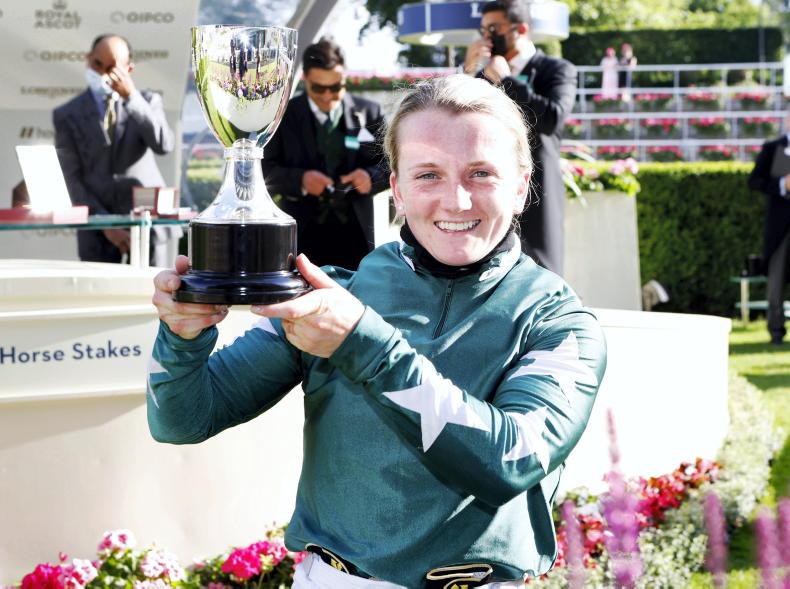 Hollie Doyle will partner Wagnis, one of two fillies in the race trained by Markus Klug \ Healy Racing

TWENTY runners will line up for tomorrow’s 153rd running of the Group 1 Deutsches Derby at Hamburg.

This is the maximum allowed; 22 were declared, but the bottom two (in order of their official ratings) will be eliminated. The runners are listed on the racecard in official handicap ranking, so in theory number one should win. In actual fact, this happens very rarely, only twice so far this century, and the number two horse has a better record.

The first two from the main trial, Cologne’s Union-Rennen three weeks ago are the two top-rated, with Sammarco, trained by Peter Schiergen, who won that race by a head, rated 1lb higher than So Moonstruck, who will be partnered by Frankie Dettori and is likely to start favourite.

So Moonstruck is owned by top German stud Gestüt Schlenderhan, who have an outstanding record in the Derby and have won it 19 times.

So Moonstruck is one of seven runners (all for different owners) trained by Markus Klug, who has won the race three times in the past decade, including with So Moonstruck’s sire Sea The Moon. Klug’s main jockey Andrasch Starke is suspended, hence the need to find other riders.

Hollie Doyle will partner Wagnis, one of two fillies in the race trained by Klug, an impressive winner of the Diana Trial at Hoppegarten last time and clearly in with a chance here.

The other filly in the field is Mylady who beat the colts earlier in the season in the Dr. Busch-Memorial, but has never yet run beyond a mile.

Fillies have won the German Derby twice since the war, but no female jockey has ever scored. This could well happen tomorrow, as Doyle will be accompanied by Germany’s leading female jockey Sibylle Vogt, who finished third in the race last year.

Vogt rides the progressive Nerik, an easy winner of his last two starts but up in grade here. He is theoretically Schiergen’s second string, but it is an open secret that there is little between the pair and that stable jockey Bauyrzhan Murzabayev found it difficult to choose between them.

Klug can also fancy his chances with Ardakan, who won the Derby Italiano back in May, but generally speaking, Italian form is weaker then German, and three German-trained fillies recently finished one-two-three in the Oaks d’Italia.

Two trainers who go four-handed into the race are Henk Grewe, who saddled the winner last year, and Andreas Wöhler, who has scored here five times.

Grewe’s best chance would appear to be Assistent, for whom Cieran Fallon has been booked. He finished very fast to win Hanover’s Derby trial a fortnight ago, a race which has often produced the Derby winner.

Wöhler would however seem to have better prospects. His stable jockey Eduardo Pedroza rides Queroyal, who won Baden-Baden’s Derby trial in good style a month ago.

Queroyal is the only supplementary entry, but was originally entered and then taken out by mistake. Wöhler also runs Alessio, who ran on well when third in the Union-Rennen, and the Irish-bred Maraseem, who runs in the colours of Jaber Abdullah, as well as Bukhara, third in that Hanover race, and one of three runners owned by Darius Racing; jockey Dario Vargiu rode their first winner, Isfahan (Bukhara’s sire), who scored for then in 2016.

The only foreign runner in the race is ex-Irish Unconquerable, who was runner-up last October in Newmarket’s Zetland Stakes for Donnacha O’Brien. He is now trained in Denmark by Flemming Velin, for whom he has won twice at Klampenborg this season. He will be partnered by top Scandinavian jockey Per-Anders Graberg, but it will be quite a shock if he is able to beat the top Germans.

The race looks wide open, with the winners and placed horses in all the main trials running. However, very few of these races were over the full Derby distance and the winner will probably be the one with the most stamina.

The draw was made on Tuesday evening; with such a large field luck in running will play a major role. As a general rule, a middle draw is best, and that could well suit So Moonstruck, drawn 10, better than Sammarco, in the risky 2 draw, and Hollie Doyle’s mount Wagnis, drawn out wide in 20.

If forced to take three against the field, this writer would choose So Moonstruck, Alessio and Nerik.