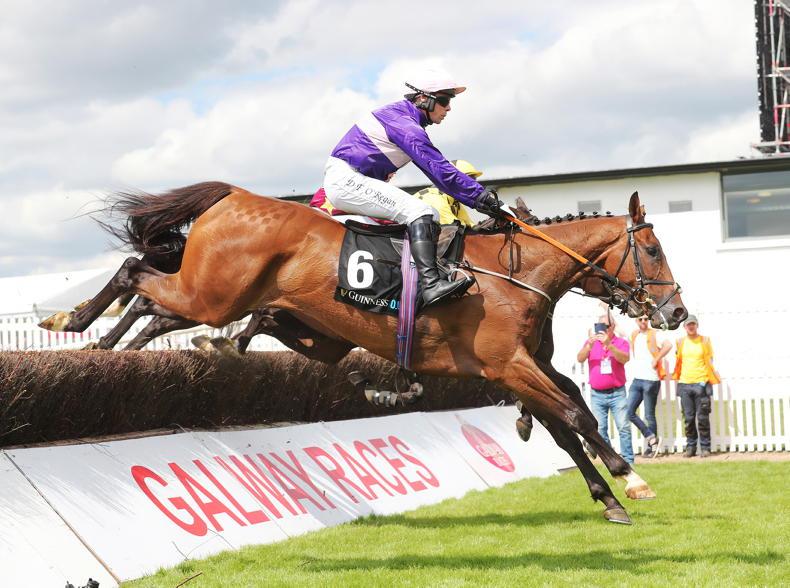 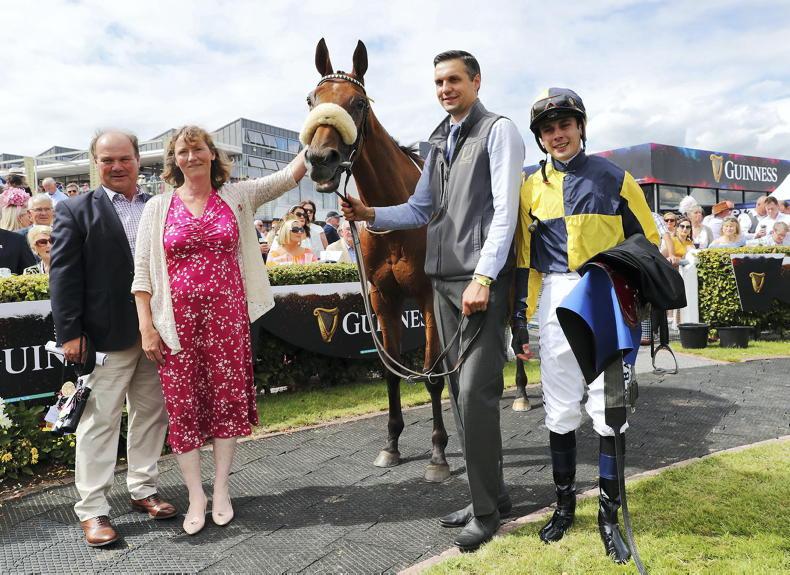 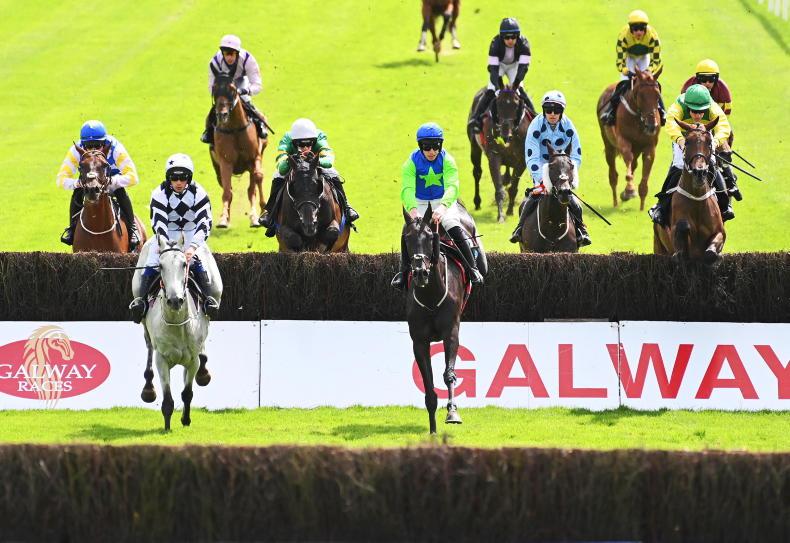 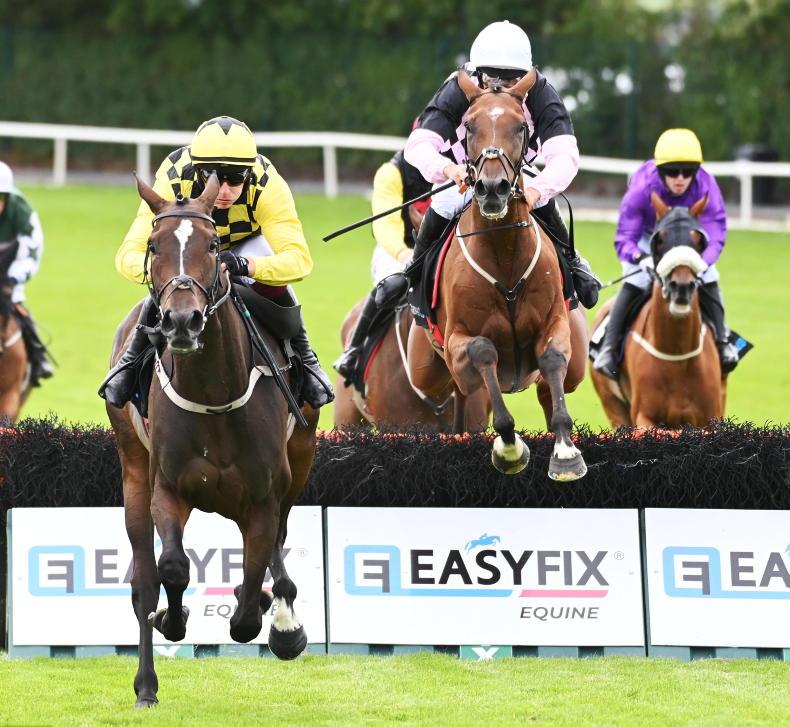 PETER Fahey could have a very smart novice chaser on his hands in Visionarian (9/2) who made it two wins from as many starts over fences in the Grade 3 Guinness Open Gate Brewery Novice Chase which kicked off a memorable double for the trainer and Galway-based owner Basil Holian.

Visionarian impressed with how he took to fences at Wexford at the start of the month. The seven-year-old came through this assignment in fine style, defeating five last-time-out winners, but this victory also owed much to a superb ride from Denis O’Regan who spied a gap on the inside of the under-pressure favourite Sole Pretender after the last.

Visionarian squeezed through this rather narrow opening which left him perfectly placed as he moved through to head the field on the climb to the line. Call Me Lyreen, who didn’t look all that happy for much of the race, arrived with strong late charge, but O’Regan’s mount held firm to score by three-quarters of a length.

“He looked a slow jumper over hurdles but we schooled him once over fences and he was electric. Jamie Codd picked him out at the sales over in Cheltenham for Basil and Colin Bowe always said ‘wait till you see him jumping a fence’. You could see today he’s rapid over them,” stated Fahey.

“We were keen to get a run into him over fences and then come here and to win here for Basil is a great thrill. He could end up being a Drinmore horse.”

The owner and trainer promptly followed up with the Declan McDonogh-ridden Soaring Monarch (6/1) in the Rockshore Handicap over a mile. The five-year-old missed the cut for Tuesday’s Colm Quinn Mile by one but compensation awaited here as he secured his first win in 14 months.

The son of Free Eagle was always well placed just in behind the leaders and got to the front inside the last furlong to carry the day by a length from Big Baby Bull with the top-weight, Onlyhuman, taking third.

“To have a double anywhere is good but to have one here is special and it’s a great reward for Basil who is a great supporter of the yard and is very patient with all his horses,” remarked Fahey. “We were disappointed this horse didn’t make it into the big handicap on Tuesday but this is good compensation and hopefully he will go up a few pounds which will get him into some of those bigger premier handicaps later in the season.”

THERE was a poignant victory in the Listed Arthur Guinness Irish EBF Corrib Fillies Stakes as Michael Halford’s Surrounding won this race for the second time and less than a day after her owner and breeder Peter Newell passed away.

On a day of huge sadness for her connections, Surrounding did them proud with a display which belied her status as much the oldest runner in the field at the age of nine.

A winner of this race in 2019, she had shown plenty of her old zest in three previous runs this season and that was again in evidence here.

With a display characterised by notable courage, Ronan Whelan’s mount fought tooth and nail in the straight to get home by a neck from Emilie Grey where less than two lengths covered the first seven home.

“Peter sadly passed away last night and hopefully this will give the family a boost. She’s very special to them as she’s the best horse they have bred,” reflected Michael Halford. “Her enthusiasm and soundness is incredible and she’s a great run the last day when she was third in a Group 3 at Fairyhouse.

“We’ve been having a quiet season and sometimes you need something to change your luck so hopefully this is it.”

This race saw a horrible incident early on where Wesley Joyce was unshipped from Red Heel and he was subsequently taken to Galway University Hospital for further assessment. Dr Jennifer Pugh, IHRB senior medical officer, gave an update yesterday. Joyce is stabilised in hospital with the majority of injuries to his chest.

Gordon Elliott added to his victory in the opening race of the meeting as Salvador Ziggy (15/2) and a canny Davy Russell pounced late to deny the odds-on Hors Piste in the Guinness Novice Hurdle over an extended two and a half miles.

The market leader was kept company up front for most of the race by Falcon Eight and possibly paid the price for that rival’s attentions as she couldn’t fend off Salvador Ziggy as the line loomed.

Hors Piste turned for home with a useful lead but she started to flag after the last and couldn’t withstand the winner’s late surge as the much-improved son of El Salvador moved past late on to prevail by half a length and bring up a hat-trick.

“He’s improving all the time and I think there could be more to come from him when he gets to go three miles. He got a lovely ride from Davy and I thought that was a very good effort under a penalty,” declared Elliott who trains the winner for William and Aisling Hurley.

WILLIE Mullins secured two winners on the day and his brace began with Rambranlt’jac returning from 249 days off to take the Guinness Beginners Chase over an extended two and three-quarter miles.

A maiden hurdle winner at Fairyhouse in March 2021 and placed in a novice hurdle here last year, the Brian Hayes-ridden six-year-old recaptured his best form in gritty style.

As the runners turned for home, the well-supported 9/1 chance (from 14/1 on track) made his challenge at the same time as Alfa Mix and he fought off that one in determined fashion to prevail by half a length, with the 66/1 chance Oscar Academy running a splendid race to lie a further length and a half away in third.

“They went a good enough gallop up front so I was happy to take a lead and he stayed going very well in the straight for me,” reported the rider whose mount is owned by the Watch This Space Syndicate.

The double was brought up by What Path (5/2) and Patrick Mullins in the Guinness Time Flat Race. This Margaret Masterson-owned gelding had been placed in bumpers at Ballinrobe and Downpatrick on his last couple of starts and he took a step forward on that form by making all the running before sustaining his effort in the straight to defeat Notowned by a length and three-quarters.

“It’s just taken him a while to learn how to race. He looks like a typical Coastal Path, a nice galloper and he likes good ground. He jumps well at home,” commented Mullins.

“It’s nice for Michael (Masterson), he was 30 years coming to Galway and never had a winner and that’s now two in the one week after Champ Kiely yesterday. This horse looks like he’ll make a nice chaser in time. He has size, scope and goes on nice ground. He could be a horse to come back here for a Plate in the future.”

Almost two years after her last success, the Tom Mullins-trained Star Image sprang a 40/1 shock in the 50-70 rated Guinness 0.0% Handicap over a mile and a half.

Apprentice Jake Coen was riding his first Galway Festival winner aboard this daughter of Sea The Stars who hugged the rail throughout and then challenged between horses late in day before edging out Pale Moonlight by a nose in a desperately tight finish.

“She won as a two-year-old but only ran well once or twice last year before trailing off.

“This is only her third run this year, I thought the last day at Limerick she’d run well but Niall (McCullagh) said the ground was too firm and she wouldn’t let herself down,” remarked Mullins.

“I was hoping that I hadn’t lost my touch because I thought she’d run well today. She’s down in the handicap and had a real top apprentice on her back today.

“She just needed a bit of luck in running and I fancied her but all my horses were giving last to no one there for a long time.”