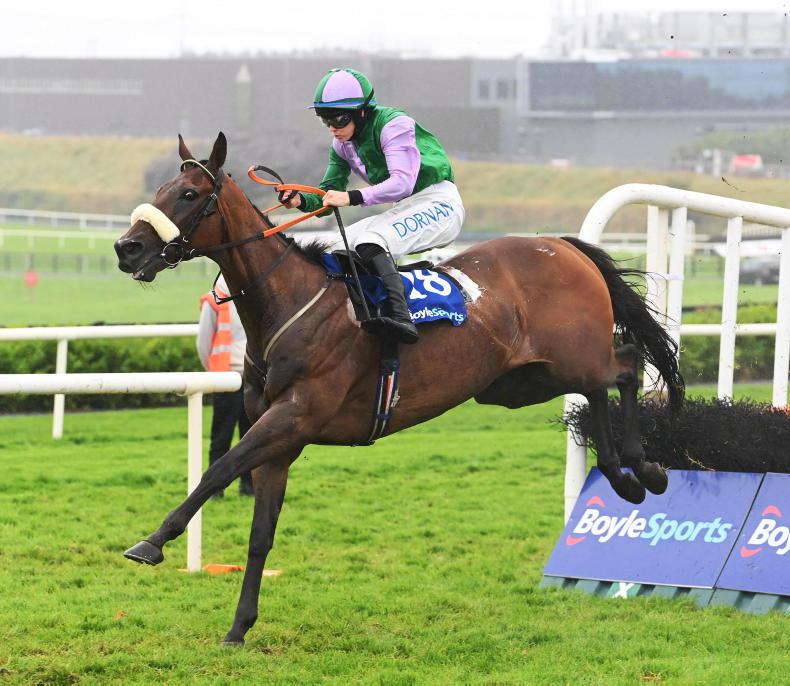 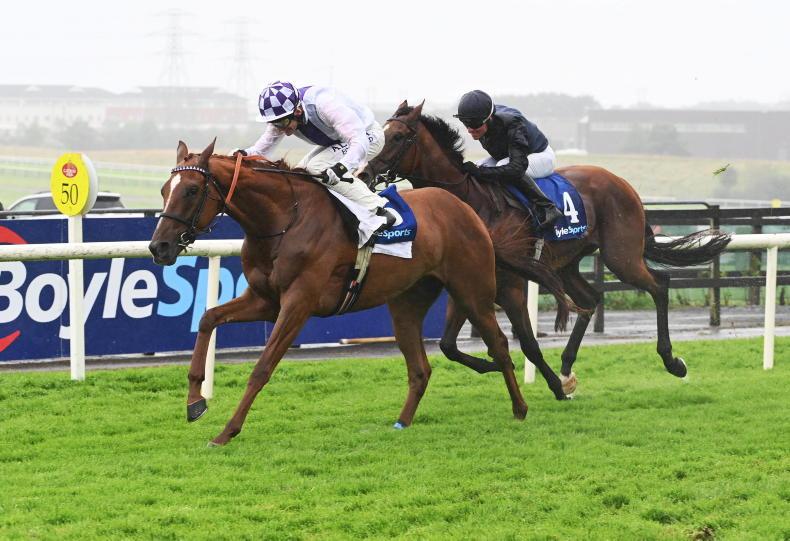 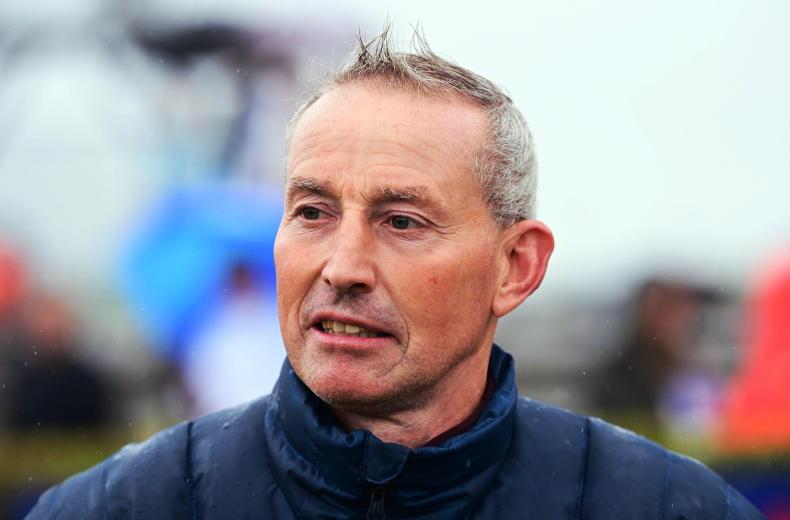 A WEEK like no other for trainer John Hanlon yielded another marquee prize as Hallowed Star bagged the €110,000 BoyleSports Handicap Hurdle under Rachael Blackmore to give the Mee family another victory to savour at the meeting they cherish above all others.

Many might have viewed Hallowed Star as his trainer’s best chance of a Galway winner this year when he lined up in Wednesday’s amateur riders’ maiden but he had to settle for fifth just over half an hour after Hewick’s Plate heroics.

For his first run over hurdles since last October, Hallowed Star was stepped up to a trip just short of three miles having never before ventured beyond an extended two miles over timber.

This decision proved inspired though, as was Rachael Blackmore’s ride as she rode Hallowed Star (8/1) like a confirmed stayer by opting to make much of the running.

This meant the seven-year-old avoided the carnage that ensured three out when Digby came down towards the head of the field and Finest Evermore made a terrible mistake when holding a similar position, in an incident that saw four runners exit while more than half the field were hampered to some extent.

It left Hallowed Star in a commanding lead over a dramatically thinned out field which he extended from the second last and victory was a formality once he cleared the last.

At the line, Hallowed Star had some 17 lengths to spare over Happy Jacky with Mars Harper finishing half a length back in third.

“He’s a right horse. Himself and Rachael got on very well. I thought he’d stay and I told Rachael to ride him to stay and he was in the right place throughout and when you are up front you won’t get into trouble,” remarked Hanlon.

“Since I started training, the Mee family have had horses with me and to give them a winner here in their home town means an awful lot.

“This is a great week and these are tough times and the support we’ve gotten this week means an awful lot to me and everyone at home too,” added the trainer.

A memorable day for owner Annette Mee also yielded a victory in the opener where the Emmet Mullins-trained Merlin Giant (100/30) took the BoyleSports Download The App Maiden Hurdle over two miles.

Just three days after taking second in the amateur riders’ flat maiden, the son of Camelot produced a nice performance as he tried his hand over hurdles for the second time.

Merlin Giant was still going strongly for Donagh Meyler when striking the front after two out and he went on to reach the line four lengths ahead of the staying on Hubrisko.

“It’s great to see him gallop up that hill for a change and stick his neck out. He galloped to the line and put to bed any questions about him getting up that hill,” remarked the trainer.

“The ground was definitely a worry coming in. It’s an old racing line and I told Donagh we probably had to go four sections wide. It was the first race and we picked the best of the ground.

“He’s potentially a nice horse going forward and on nice ground he should be right there among the early season novices.”

THE theme of odds-on woe at this year’s meeting continued into the BoyleSports Casino Irish EBF Maiden where Serious Challenge (9/2) turned over the odds-on Hiawatha on a poignant day for legendary trainer Jim Bolger whose brother, Paddy, passed away in the hours preceding this race.

“He (Paddy) was the person that ran the foaling operation for my father, the stud farm operation down in Wexford, assisted by his son Ken and his wife Margarite,” said Una Manning.

“Uncle Paddy actually had a winner this time last year in Galway. It’s poignant because he always came to Galway and they loved the meeting so I’d just like to pay tribute to him and offer my condolences to all his family.”

The Jackie Bolger-owned Serious Challenge shaped very nicely on his debut five days previously when he was third to Pivotal Trigger and he appeared to revel in both his second visit of the week to Galway and the step up to an extended mile.

Kevin Manning sent the son of Fracas upsides Hiawatha nearing the turn for home and he was soon showing in front. The market leader didn’t go down without a fight but had no more to give in the closing stages as Serious Challenge got home by three parts of a length.

“He’s done that nicely. He had a good run here on Monday in a decent maiden when he was just a bit raw coming down the hill.

“I thought he could come forward a lot from that and you could see the benefit of that first run in him,” stated Manning whose mount could now be bound for the Futurity Stakes. “He’s a big horse who is only going to improve and I think he’s got a future.”

Joe Murphy and Gary Carroll added to their win in Friday’s feature as Pandora Lovegood made all in the Gra Chocolates Irish EBF Nursery Handicap over seven furlongs.

This Tony Auld-owned daughter of Fast Company bolted up in a Roscommon maiden a month previously and with her ability to handle testing ground assured, she was sent off the 15/8 favourite.

Goa Gajah looked a potential danger off the last bend but Pandora Lovegood shrugged him aside to carry the day by a length.

“She’s always shown that at home, she’s a nice genuine filly and we love her. She’s probably 7lb better on soft ground and I think she’ll make a way better three-year-old.

“We were delighted to see the rain come and driving up I was more confident the more rain we got,” declared Murphy who could let his charge line up in the Group 2 Debutante Stakes next weekend.

Billy Lee got off the mark for the week when he teamed up with Ray Cody’s Saraqael (5/1) in the Bathshack Maiden over an extended mile.

The Ballygallon Stud-owned son of Dark Angel, who had begun his career with a couple of encouraging efforts, won nicely.

He came between horses to lead over a furlong from home and readily accounted for Samuel Pepys whom he had just under three lengths in arears by the time he hit the line.

“When we step up in trip I’d say he’ll be better. Billy said he’ll get a mile and a half down the line if we need to,” stated Cody.

“It’s only his third run and he’s a big green horse, even for around here he’s a big unit. He’s better when he has an ease and the more rain that came the more confident I was today. I think there could be a lot more to come from him.”

THE first and only British winner of the week came when Aqwaam took the McDonogh Capital Investments Handicap over just short of a mile and a half.

This success bridged a gap of some 19 years for trainer Ian Williams and owner Patrick Kelly who struck at the 2003 Galway Festival when The Prince won a claiming race under Johnny Murtagh.

Seamie Heffernan was on board the Williams runner this time and he produced the strong travelling son of Sea The Stars to lead a furlong out en route to a three-parts of a length triumph over Insane Bolt.

The well-supported 8/1 shot hadn’t managed to reach the frame in four previous outings in Britain but the manner of this success would suggest that he has plenty of scope for progression off a mark of 75.

The day concluded with another bumper winner for Willie and Patrick Mullins courtesy of Carrigmoorna Queen in the BoyleSports Irish EBF INH Mares Flat Race.

The Closutton Racing Club-owned daughter of Walk In The Park was sent off at 8/13 to build on a second at Punchestown on New Year’s Eve and she duly ran out a four-length winner.

However, she did have to work somewhat for this success and I Am Shadow turned in a much improved effort to keep the market leader honest after she struck the front over a furlong out. The winner could now switch to hurdles and is likely to be kept going through the winter months.

Matthew Smith produced his team in rare order for this year’s meeting and he made it three winners for the week when Excuzio Joe (3/1) captured the 50-75 rated Ardilaun Hotel Handicap over seven furlongs.

The Gordon Cranston-owned daughter of Epaulette shaped up well when fourth to Dunum here on Tuesday and was another for whom the rain was a major plus.

She got on top for Declan McDonogh inside the final furlong and went on to defeat Zephron by half a length.

The winner is likely to stick to soft ground for the remainder of the season and Listowel could be on her agenda.