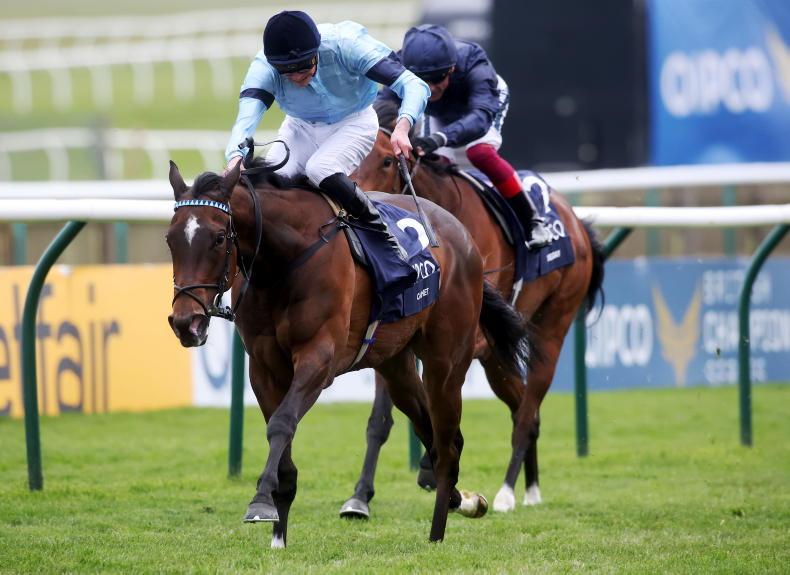 How many races have the last five winners of the Emirates Poule d’Essai des Pouliches annexed subsequent to that classic triumph? Incredibly, the answer is a combined total of a big fat zero, which just goes to show what a tricky conundrum this race provides.

A big field contest around a bend in early season when fillies are progressing at completely different rates compared to one another lends itself to shock and sometimes undeserving winners.

So that’s the gambling wealth warning out of the way. Were it not for that worrying recent history, it would be tempting to suggest that tomorrow’s 15-runner renewal was, in effect, a tri-nation three horse race: Cachet, the winner of the English equivalent, versus Rosacea, brilliant heroine of the main course and distance trial, versus the best-bred filly in the field, the solitary Irish challenger, Toy.

My inclination is to side with Cachet, given that she has been in such cracking form this season, employing the front-running tactics she first used when only caught late in the Breeders’ Cup Juvenile Fillies Turf.

Racing around a bend is clearly no issue for her and her 1000 Guineas victory deserves to be upgraded given that she somehow managed to keep going having set a very strong early gallop to hold off Prosperous Voyage by half a length.

Provided James Doyle gets the fractions right, this turning track lends itself to a trail-blazing style more than Newmarket does and Cachet could prove impossible to peg back.

Trained in Deauville by Stephane Wattel, Rosacea beat four of tomorrow’s rivals in comprehensive style when landing the Group 3 Prix de la Grotte over this track and trip four weeks ago and it would be a surprise if she cannot confirm that form.

She is the absolute opposite of Cachet, having come from the rear to get up in the last 75 yards in each of her last three starts. However, with a strong pace virtually guaranteed, her pilot, Mickael Barzalona has a difficult task ahead of him in trying not to give Cachet too much rope while at the same time being aware that his mount could stop if she hits the front too soon.

Aidan O’Brien has only won this race once, way back in 2001, but has the perfect candidate in the shape of Toy, a full-sister to three classic winners not to mention Happily, who was placed in both the English and Irish 1000 Guineas in 2018.

She has some way to go to emulate her famous siblings, but she got off the mark in such scintillating style when thrashing a big field at Cork last month to show that anything is possible.

Pick of the remainder is a second British raider, Jumbly, though the form of her second place in the Group 3 Fred Darling Stakes does not look strong, while the Group 3 Prix Vanteaux winner, Mqse De Sevigne, merits consideration simply because she is the only representative from the yard of the master trainer, Andre Fabre.

Charlie Appleby dominated the British version of the Emirates Poule d’Essai des Poulains, saddling the first two home in the 2000 Guineas, and many will be expecting him to keep his classic bandwagon rolling here thanks to the Breeders’ Cup Juvenile Turf hero, Modern Games.

But this race presents a very different test to the Newmarket equivalent and one that Appleby has never been placed in before. So, with Modern Games running for the first time since November, he looks worth opposing with the Group 3 Prix de Fontainebleau scorer, Welwal, from the red hot yard of Jean-Claude Rouget.

At the time, I was not particularly taken with the standard of last month’s Fontainebleau and Welwal was only a neck ahead at the line that day. Yet the form has been franked by subsequent Group race victories from both the fifth, Vadeni, and Onesto, who finished eighth, and Welwal was value for a bit more than the official winning margin.

Rouget, who has a better than one in three strike rate over the past fortnight, saddles a second legitimate contender in Lassaut and has won this prize twice in the last five years.

Modern Games took a few runs to reach peak fitness last term and may not even come out best of the three British hopes.

Slight preference from that trio is the Roger Varian-trained Bayside Boy, another seasonal debutant boasting some excellent juvenile form having won the Group 2 Champagne Stakes prior to twice finishing third in Group 1 company, while Jane Chapple-Hyam’s Claymore was not disgraced when chasing home Native Trail at a respectful distance in last month’s Group 3 Craven Stakes.

Aidan O’Brien’s three-year-olds have suddenly struck form, landing six stakes races in the past 10 days. But those results have largely been achieved over slightly longer distances and his representative here, The Acropolis, does not seem to be too high up the Ballydoyle pecking order.

Indeed, he has been beaten in all six pattern races that he has contested and although he should strip fitter now than when half a length second to Dr Zempf in the 2,000 Guineas Trial at Leopardstown six weeks ago, that form has not worked out well.

The Group 3 Prix Djebel winner, Rock Boy, is the only unbeaten colt in the field but surely needs softer ground while Scherzo could be an interesting outsider having spent the winter in Qatar.