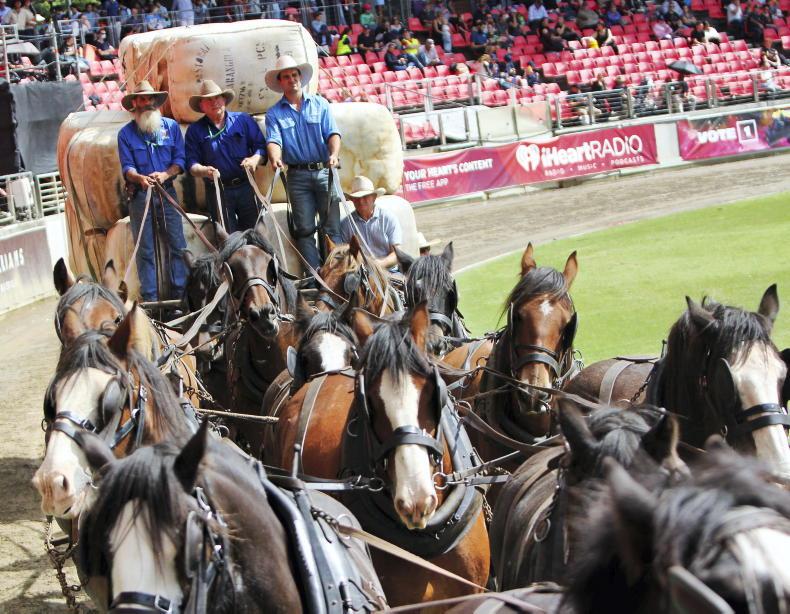 Woolpack: Concentration written on the faces of the three drivers of the 21-strong team of heavy horses at the Sydney Royal Easter Show \ Susan Finnerty

CANCELLED due to the pandemic in 2020, the Sydney Royal Easter Show bounced back to celebrate its 200th anniversary this year.

The end result was a spectacular, uniquely Australian show, complete with breeds such as Australian Stock Horses and Galloways, plus home-grown Welsh ponies, hacks and thoroughbreds galore seen over 12 days.

Taking centre stage in the daily heritage parade were up to 20 Clydesdales pulling a wagon laden with wool bales, typically transported from outback properties to the nearest railhead after shearing. Oxen, camel and donkey teams were reminders of how Australia’s roads and railroads were carved out, commerce was built up and farm work carried out.

Another highlight was the official opening ceremony, performed by the Princess Royal, with the pageantry supplemented by a group of Australian Aboriginal performers.

Then there was the parade of champions; a swirling kaleidoscope of police horses, pirouetting Welsh ponies, heavy horse breeds, show jumpers and cattle breed champions that all filled the huge stadium, lit up by the crimson-red, purple and gold ‘Colours of the Outback’ hues of the nightly fireworks display.

Apart from horses, Sydney was a Noah’s Ark of many animal breeds, from alpacas to doe-eyed Jerseys to Brahman beef cattle. And it was standing room only for the dog show and wood chopping crowd magnet finales in other arenas dotted around Olympic Park.

Add in young Charlie Magnier and the Irish-bred Cooley Gangster’s wins; the locals ‘No worries!’ laid-back attitudes and an atmosphere similar to a cross between the Spring Show and Ploughing Championship, made for an unforgettable 200th birthday party.

617 - million Australian dollars generated each year towards the New South Wales economy by the RAS.

200,000 - Australian Stock Horses registered with the breed society, according to its registrar Susie O’Brien.

42,000 - children took part in the Little Hands on the Land interactive display.

32,200 - scones baked by the Country Women’s Association of NSW during the Show.

200 - new Australian citizens after a conferring ceremony held at this year’s Show.

13 - tonnes. The heaviest load of wool bales carried by the Clydesdales show team.

2 - million. The estimated number of showbags sold this year.

“Just eight hours to drive home. This fellow here, about 15,” - Aussie showgoers think nothing of their Sydney pilgrimage. “We just get so much fun out of it and if you can pass on a bit of happiness to people, good.” - Les Robinson explains why he and his wife Maureen volunteer at the show.

“The thoroughbred is a breed that we have been investing in significantly over the past years. Of course there’s enormous interest in the public in the rehoming of thoroughbreds after racing and the welfare of the horse.” - John Bennett, Horse Committee chairman.

“I moved to Sydney nine years ago to start our dream of becoming a show jumper. My father [Greg] rode at the Seoul Olympics in 1988, he was in the World Cup finals and stuff like that, so it’s in my blood. We’re a very horse-mad family, he was also a racehorse trainer and I’ve sort of taken over the business. The racehorses pay for the show jumpers!” - Tom McDermott, Sydney Grand Prix winner.