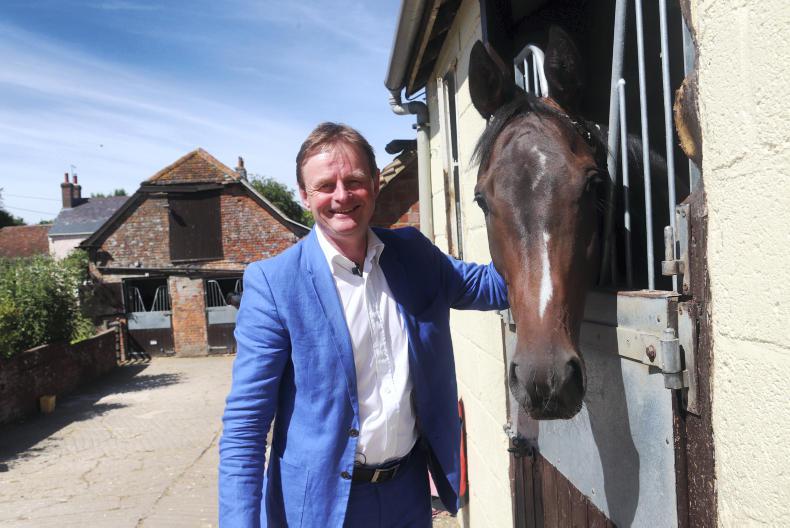 THE scene from the worst horror movie imaginable continues, the one difference being we are now the extras, either fleeing or hiding from the disaster.

“It is upon us now to be responsible, and if we aren’t then there will be sequel after sequel; it starts and finishes with us, the extras.

“I have listened to the politicians, leaders, scientists, experts, and even the celebrities, and I am yet to work out if this has brought out the best in us, or sadly the very worst. I still believe it will be the former.

“I make my living, and a privileged living at that, through the vehicle of sport; my beloved sport. Growing up I wanted to be Georgie Best or Gareth Edwards, and I discovered racing through the Grand National, Red Rum and Sir Peter O’ Sullevan’s magical commentaries.

“Sadly, I was not the next Georgie Best or Gareth Edwards and, aged 19, I found myself at Captain Tim Forster’s National Hunt yard near Lambourn to try my hand in racing as a stable lad, having never even ridden a pony in my youth. As the head lad told me at the time, ‘I’ve been in this job 29 years, and you’re easily the worst I’ve seen’, and he was right. I even ended up working for the great John Kiely in Dungarvan who, on seeing me ride work, decided I was better off looking after the cattle. He was right too.

“However, due to a high degree of luck (and we all need luck), support and some effort to understand racing, I somehow ended up running the Professional Jockeys Association in Britain. Life has never been the same again since, as I have been involved in sport ever after.

“Now as a sports psychologist, for which you can mainly blame Richard Dunwoody and A P McCoy, I have worked with some wonderful managers, athletes, coaches, scientists and, my greatest thrill of all, touring the world with the Irish cricket team, causing a few upsets along the way but forever smiling at the privilege to be involved in sport.

“Of course, all that matters now is peoples’ health and somehow overcoming, controlling, containing - whatever the appropriate phrase is - the spread of this wretched virus.

“When sport is discussed now, the phrase I hear most is ‘sport is not that important in the great scheme of things’. Sport, today, is not the most pressing matter, but before, and eventually after coronavirus as this will pass, sport is important. Actually it is really important.

“Indeed, it has never been or never will be more important and I, for one, am not embarrassed to say that. As I write this, it probably saved my life as I was drifting hopelessly through life until I found the discipline, routine and sense of belonging that sport offers us.

“In my view, and I know I am not universally popular for saying this, sport is more important than we ever thought, now that we don’t have it. Sometimes, I have been a little embarrassed or nervous to speak up for sport because it wasn’t seen as important as other activities or professions, but it is. Including horse racing, of course.

“Before coronavirus wreaked havoc on the world, mental health was probably the most talked about wellness issue. There are many causes in a rapidly changing world, but it was being talked about and addressed seriously, especially in Ireland. But sport is one of the best medicines to combat mental health issues, or indeed any form of ill-health, as in the main it is the healthiest activity in the world.

“If you are involved in sport, any level of sport, you are often likely to be outside, moving, running, being with people, learning to be part of a group or team, and above all having something to aim at, as without a goal in life you have nothing to kick at.

“Sport is the glue that binds and holds us all together. For schools, villages, towns, cities, counties, regions, clubs, institutions and countries, it is a source of hope, joy, optimism, vitality and life, and the debates it causes, win or lose, are part of our everyday lives.

“It brings identity to nations, the All Blacks as a symbol of New Zealand Heritage, the Brazilian football team as the source of hope across a vast nation, and in Ireland, well, sport brings everyone together when your rugby team runs out in front of a packed crowd at the Aviva stadium. It is the never-ending story that keeps on giving, until now.

“Be it cheering on your local GAA club through to supporting your county or national team, sport binds us together. Think of heading to Cheltenham, Punchestown or Leopardstown to try and back a winner, a day out at your local point-to-point, and as for Galway, well that’s for another day. And I have not even mentioned the financial aspect. Besides the joy it brings, it also generates jobs, purpose, careers, and its contribution to the local and national economy cannot be underestimated. But this is not about money.

“So when you hear that sport or racing does not really matter, think again and maybe speak up for it too. We have already found out what and who really matters, but when this passes, and it will pass, sport and racing can help us find our sense of hope, joy and belonging all over again, and keep us well too.

Michael Caulfield MSc is one of the most experienced sports psychologists in Britain, with over 30 years’ experience of working in sport, business and academia. After 15 years as chief executive of the Professional Jockeys Association (PJA), he retrained as a sports psychologist. He worked at the leading training consultancy Sporting Edge for many years, but now operates on his own. Just Caulfied is just that.