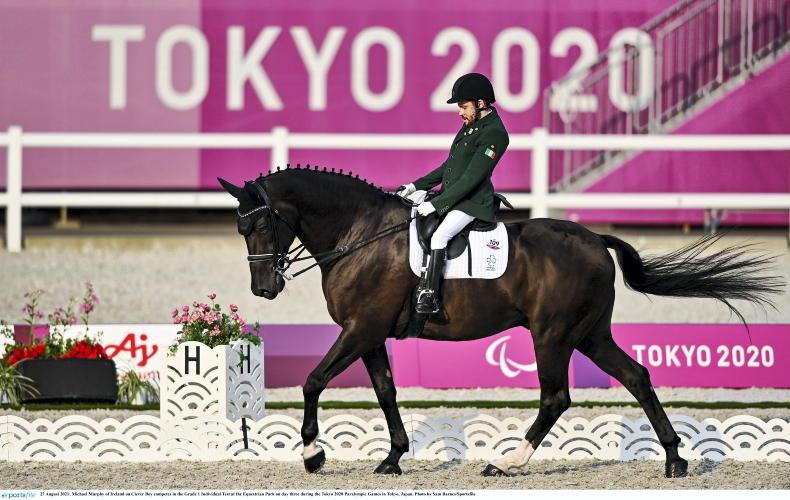 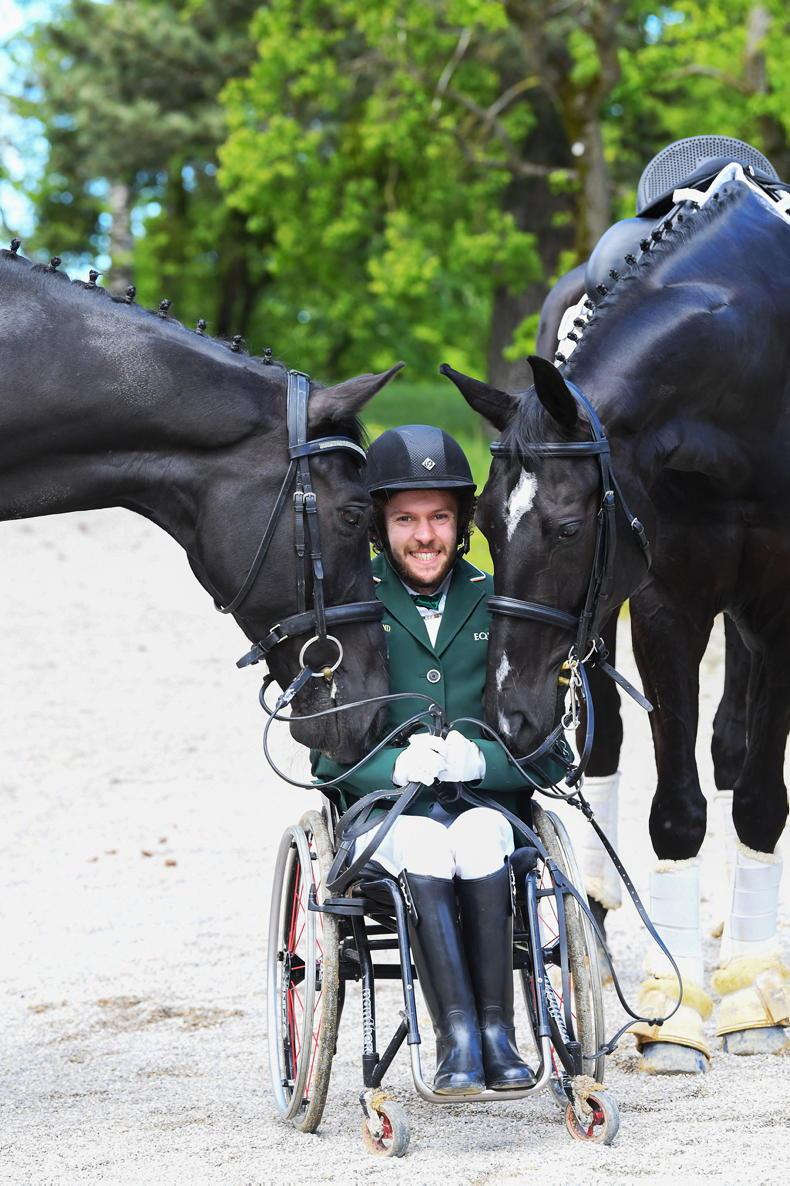 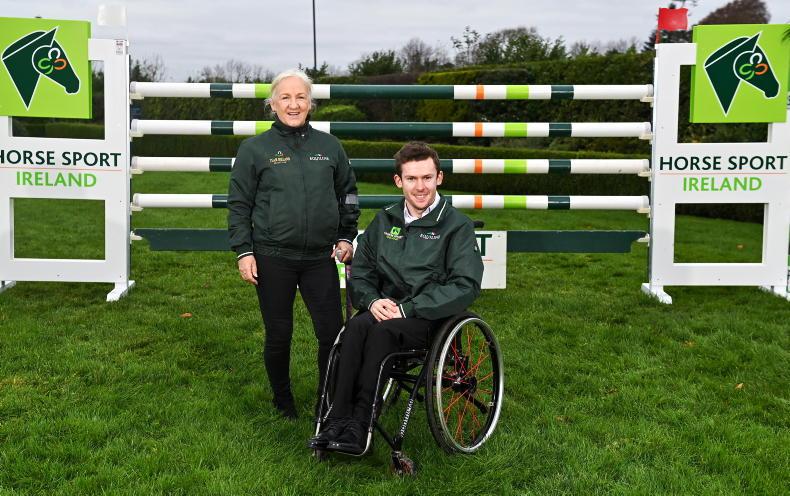 INHERITING his love of horses and riding from his mother, Irish para dressage rider and Tokyo Paralympian, Michael Murphy, is undoubtedly a very bright young man on a mission for medals.

Recently honoured as part of Horse Sport Ireland’s Athlete Reception, meeting Michael, his parents Sue and John, along with FEI vet, Dr Nick Hart of the Royal Veterinary College, provided the ideal opportunity to catch up afterwards with this multi-faceted rider and his supportive team.

“It was really phenomenal to be there as a team at Tokyo. We found out late that we were going to Japan. It all happened at the last minute really and it was an incredible effort by everyone just to get us there – many thanks to Horse Sport Ireland and the support staff as well. It was fantastic to be there as an Irish team, and hopefully is just the start, it lays the foundation for us as a team going forward,” commented Michael on the Tokyo experience.

Based near London, and with his two horses stationed in picturesque Bath, 2021 was something of a whirlwind for Michael who works full-time as an environmental adviser with a construction firm. His nine-to-five job helps pay the very considerable costs involved at his level in the sport. For example, the qualification road to Tokyo cost the Murphy family the guts of £100,000 and they are currently searching for a horsebox sponsor to help ease the financial burden.

“I have a good job. I studied Biology at Warwick University and graduated in 2020. I have always wanted to do something else alongside the horses just to take my mind off all the pressure of competing and I like to be busy as well – it’s nice to have a distraction,” said Michael.

“My horse Cleverboy is amazing, Tokyo was just my third competition with him. I had only started with him the November the year before and in a very short space of time, we gelled and were doing things I was not expecting us to be doing. We had great success with scores I never dreamed of getting (including a hat-trick of wins at Hartpury) and I went to Tokyo with real momentum. “It was an amazing year, I learned a lot and I’m looking forward to the next one. It actually feels like me and Cleverboy have been together for years. We are looking now to the Worlds (World Championships) next year and Paris (2024 Olympics) will also come up very fast.”

Currently on a winter break, his training schedule will see him back in March for the European circuit before contesting the World Championships in August.

Former Grand Prix horse Cleverboy (14) is owned by Bronte Watson who represented Great Britain with him at several internationals. Deciding it was time for him to step back from Grand Prix level, she generously gave the horse to Michael to compete in para-dressage and the duo have since gone from strength to strength.

“I luckily got the ride on Cleverboy, he has such a kind temperament, a dream to ride, always wanting to give more. I’m in a very lucky position. I have him and my own horse, Dark Diamond (10), in Bath. He’s the back-up that I’m bringing along behind Cleverboy when he retires.

“My Mum is very humble about her own background, she was a good show jumper in her day. She had put down her reins a long time before I came along and it was a coincidence that I loved it as well – it’s very handy having a mother who knows it all inside out.

“Competing at international para-dressage level costs a lot. We don’t have our own horsebox so we have to move all the horses with transporters which means each show can cost us up to 10 grand just to get there and back. That’s all self-funded.

“A horsebox with living quarters is a big thing because if we could have get that, it would more than halve the cost for us of going away so that’s the big focus at the moment. I have got the horse power now, which was the first thing and now that I have the horse power to push for medals in the future, we need a horsebox to take them and us around the world.

“The Worlds (World Championships) will come around very quickly and they are equally as big and as important. I have got one of the best horses out there at the moment which is a dream so now it’s about establishing ourselves and trying to win a few medals for Irish para-dressage,” said Michael.

Michael started riding as a four-year-old for therapy reasons, initially in a bid to strengthen up his frail body. “I had two people holding me on and one person leading the horse. I could barely sit up. Over time I gained the ability to ride independently and from that moment on, riding became my freedom. When I was in school or anywhere else I’m stuck to a chair or limited but when when I’m on a horse, I’m the same as everyone else. I can go do everything.

“That was really addictive for me, that freedom and that harmony and communication you get with the horses, that feeling is something you cannot really recreate anywhere else. I just fell in love with the sport and could not stop even if I wanted to.

“I grew up with the Riding for the Disabled (RDA), started with them at four and was still riding in an RDA centre when I was 21. It’s been a big part of my life. The work they do in RDA is phenomenal. The larger majority of our riders (in para-dressage) come through the RDA. It is really important for para-dressage to have that but it’s also bigger than that. The RDA provides a second home to so many people, does wonderful things for so many families – it did for me when I was growing up.

"It’s a little family and I would definitely recommend people to get involved in the RDA,” said Michael.

His vet and friend, Nick Hart, who served as the para dressage team veterinary in Tokyo, is also Britain’s national honorary veterinary surgeon for the RDA. Post Tokyo Olympics, the Paralympic Games and the discipline of para dressage garnered huge international media attention, putting the sport and the incredible achievements of these wonderful riders on a global stage.

Asked what the national federation could perhaps do to continue to aid this growing sport, Michael was quick to reply. “Tie in dressage and para dressage more – we are under one umbrella, we are doing the same sport, so combine the two more I would say. The community is small in Ireland at the moment but it’s expanding and getting bigger and it would be great to combine the two more and help spread the awareness of para-dressage out there as well.’

Anyone who engages with Michael Murphy certainly comes away far more mindful by his many abilities in so many key spheres – full-time work, international riding, his great attitude to life – than just the physical disability denoted by his wheelchair.

Gifted with a sense of humour and a real ability to connect with people, Michael’s eyes are firmly on trucking on with his life’s mission.

The road ahead is full of promise.